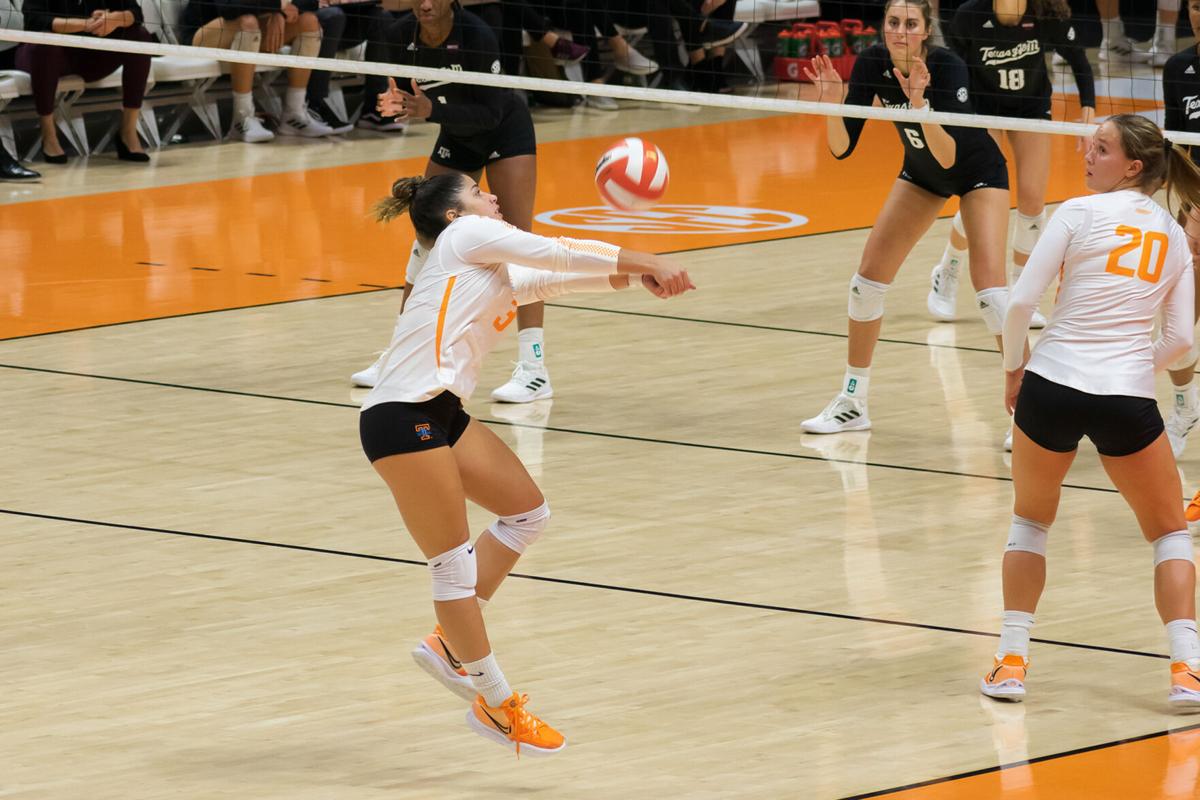 Paola Laborda (3) with a bump pass to her teammates against Texas A&M at Thompson Boling Arena. Sunday, October 3, 2021. 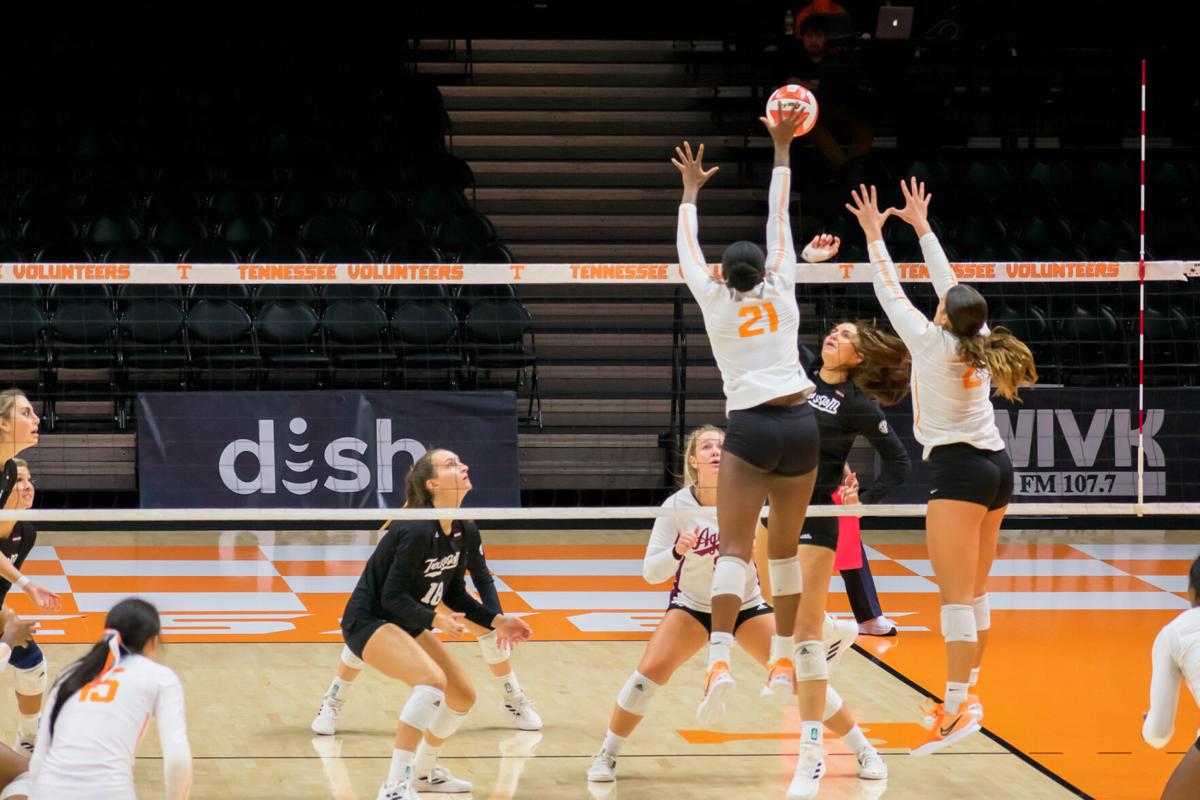 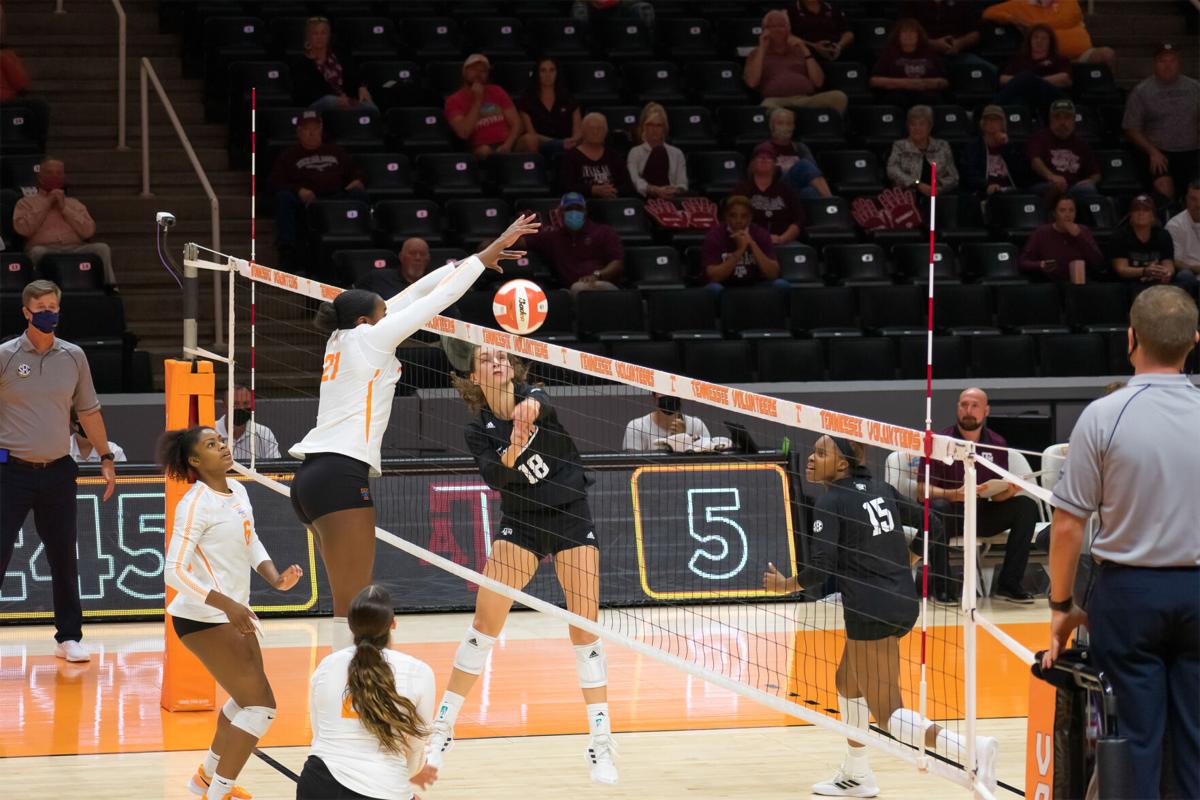 “We weren’t good enough,” head coach Eve Rackham Watt said after the match. “We didn’t play well enough, we didn’t execute. We played pretty undisciplined. Anybody in this league is going to be good enough to beat you if you play the way we did today. We got to learn from it.”

Tennessee got off to a slow start in the first set with A&M fighting to secure its first win in the two-game series. Both teams scored back and forth, and the set was tied up on five different occasions. The Lady Vols would eventually adjust and take 11-7 lead off of kills by their outside hitter Breanna Runnels and clutch blocks by their senior middle blocker Ava Bell. The Aggies would be forced to take a timeout to regroup.

Coming off the timeout, the Aggies hit the ground running and tried to build momentum with back-to-back points. Down 17-10, Texas A&M scored four unanswered points to force Tennessee into a timeout still trailing 17-14. Texas A&M stormed back to tie the game three more times late in the set. In the end, the Lady Vols held on and took the first set 26-24.

In the second set, Tennessee jumped out to an early lead. Going into the first timeout, the Lady Vols held a healthy 14-9 over the Aggies. Despite the team’s strong start, the Aggies managed to keep the set close and even tied the set twice at 17 and 18 points. It was looking like it was going to be yet another close set between the two teams.

The Lady Vols struggled to contain the Aggies offensively in the second half of the set. The Lady Vols that were once up by seven points now found themselves tied 21-21. While Tennessee held on for one volley, a service error would cause Tennessee to drop the second set 23-25.

The Lady Vols were looking to bounce back from the tough second set loss in the third set. For the Aggies, junior outside hitter Morgan Christian managed to put up quick kills to put A&M on the board early.

The Lady Vols were able to break away and build up an early lead going into the set’s first timeout leading A&M 12-7. Middle blocker Bell came up clutch on both sides of the ball, making key blocks and scoring the set-winning kill. The Lady Vols would go the entire set without losing their lead and take the set 25-17.

Tennessee was looking to end the game in the fourth and final set. The combination of Felts and Fingall made a huge impact early propelling the Lady Vols to a 6-3 lead. However, the Aggies once again fought to keep the match alive and found themselves up 9-7 over the Lady Vols going into the first timeout of the set.

The set was a back and forth fight with the Aggies holding a slight lead over the Lady Vols. Towards the later minutes, the Aggies found their second wind and dominated the Lady Vols.  Tennessee couldn’t hold on however and dropped the fourth set Texas A&M, 25-21.

It all came down to the fifth and final set. The Lady Vols have only appeared in two other set fives this season, winning against No. 9 Baylor and losing against No. 7 Pitt. Like the other four sets, set five was highly competitive, as both teams scoring back and forth.

Both teams fought for every volley and the set was tied a total of nine times. Graduate student Nicole Shanahan made an appearance in the final set but her impact was limited. The Lady Vols defense couldn’t hold on in the end as they fell 15-17.

Unfortunately for the Lady Vols, they could never hold on to their leads and made too many little mistakes. Danielle Mahaffey ended the night leading the Lady Vols with 14 kills and seven blocks. Behind Mahaffey was graduate student  Runnels with 13 kills and Fingall with 11 kills.  Tennessee ended the set with a .216 hitting percentage.

“I think the season has started off well,” Rackham Watt said. “It’s really about what you’re doing each day. The season we’ve already played is behind us and we’re thinking about how we’re going to beat South Carolina.”

The Lady Vols hope to bounce back next week as they travel to Columbia, South Carolina, to face off against yet another SEC opponent in the Gamecocks Saturday.

Aubrey Caster heads out to Ped Walkway to ask students their thoughts on the game this weekend.

What to Watch Wednesday - Vivarium

What to Watch Wednesday - Vivarium

Aubrey Caster heads out to Ped Walkway to ask students their thoughts on the game this weekend.