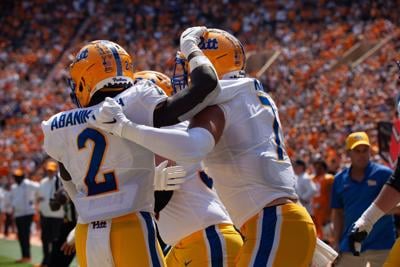 “Obviously, we are disappointed in the outcome. There were a lot of things that had an opportunity to change the football game,” coach Josh Heupel said postgame. “There were turnovers and opportunities in the red zone that we didn’t take advantage of.”

Despite this, the Vols came out strong in the early-going. Freshman Christian Charles made his presence known four plays into the game on special teams with a punt block that later resulted in a Jabari Small touchdown from the 1-yard line.

Tennessee’s suffocating defensive play shined throughout most of the first quarter. By the time the Panthers completed a first down, the Vols were up 10-0.

Fifth-year senior Kenny Pickett responded well to the early adversity. The Panthers followed Chase McGrath's 37-yard field goal with a 92-yard touchdown drive to put Pitt on the board.

The second quarter is where penalties started to pile up for the Vols. Starting quarterback Joe Milton III showed the most promising possession of the game offensively before 50 yards worth of penalties moved Tennessee back to the 31 for fourth and goal. The drive ended in a 48-yard field goal by McGrath.

Penalties were a trend throughout the Johnny Majors Classic for Tennessee. The Vols totaled 13 yellow flags for 134 yards by game's end.

“It’s not who we’ve been,” Heupel said. “There’s a bunch of things we have to be better at as competitors. We were not good in those moments. You add up all those little things, and there’s a lot of opportunities to change the scoreboard.”

The Vols’ inability to score a touchdown on a drive where they had a snap within the 5-yard line was a huge momentum swing in favor of the Panthers. Pitt went on to score 13 unanswered points and entered halftime up seven.

The second quarter was a rough one for the Vols even without the penalties. For starters, Milton was knocked out of the game following a strip sack. Starting edge Tyler Baron and sophomore receiver Jalin Hyatt suffered injury problems as well, leaving the Vols without their top running back, receiver, quarterback, edge and starting center heading into the second half.

“All of our quarterbacks are ready to go,” Warren said. “I have 100% confidence in any of them.”

Perhaps the play of the game did not go in Hooker’s favor, however. The Panthers defense stuffed freshman running back Jaylen Wright on fourth down deep within the Pitt redzone to keep the Vols out of the endzone.

Hooker and the Tennessee offense lined up in shotgun formation on the fourth and inches play. Hooker’s third down rush came up just short.

“I felt like we had a good plan, we just didn’t execute in that moment,” Heupel said.

Tennessee got another shot with five minutes remaining to tie the game up at 41. Hooker overlooked the safety and threw his first interception of the season in response. Pitt ran the clock the next possession and put the game away.

Tennessee’s next matchup is another noon home game against Tennessee Tech.

Join Chef Tyler White with the UT Culinary Institute as he demonstrates how to make a freeform apple pie.