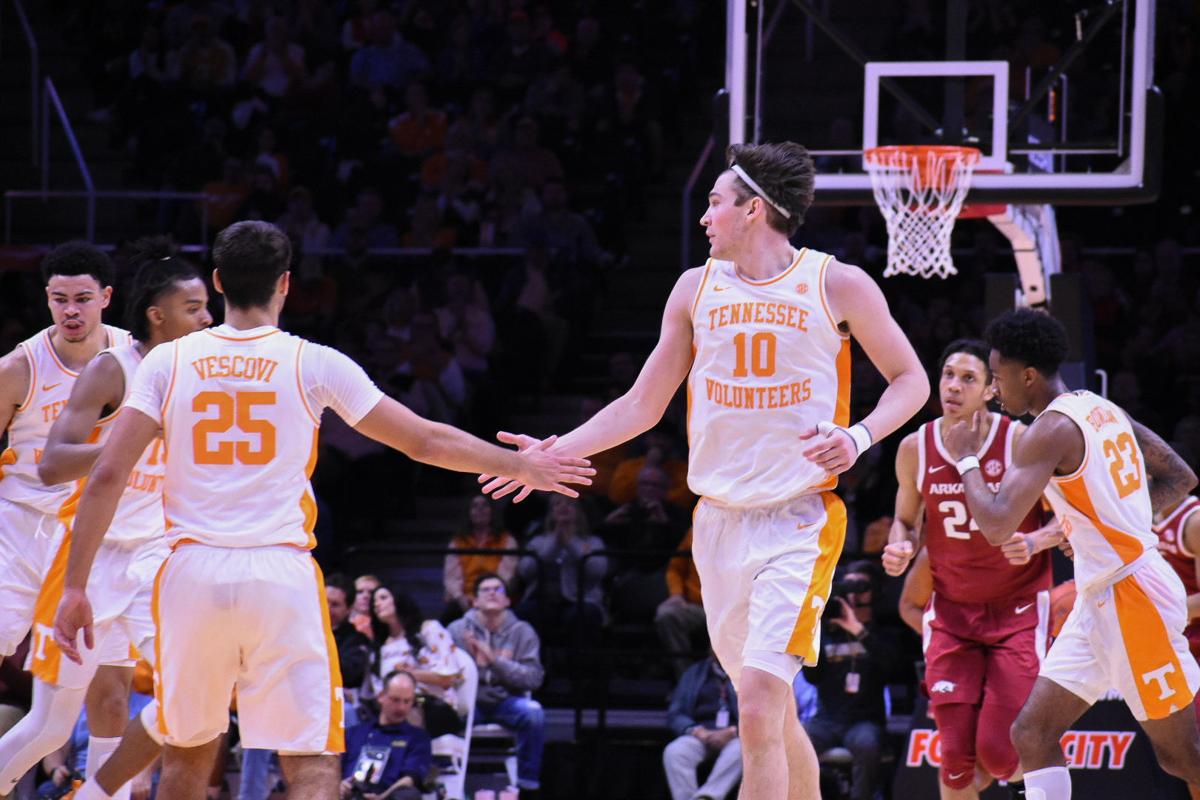 John Fulkerson (10) and Santiago Vescovi (25) share a high five during their game against Arkansas at Thompson-Boling Arena on Tuesday, February 11, 2020. 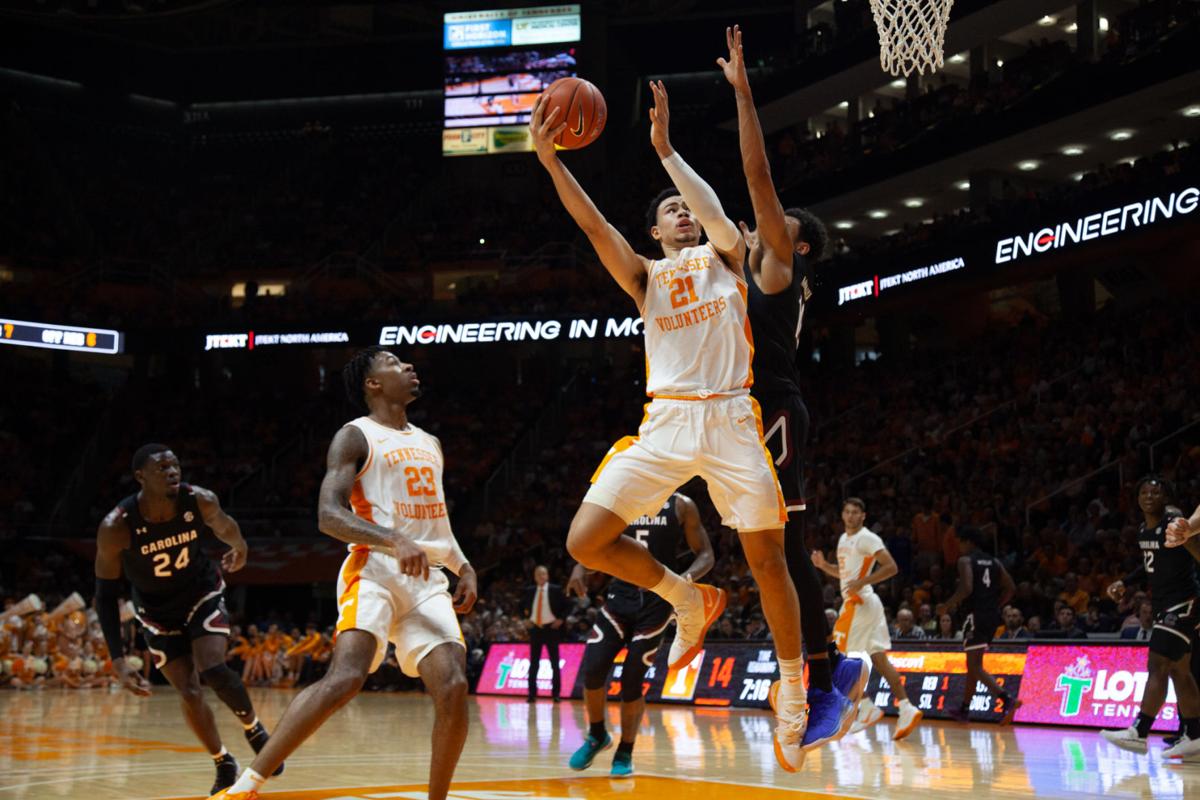 Olivier Nkamhoua, #21, brings the ball up towards the basket during the game against South Carolina on Saturday, January 11, 2020 at Thompson-Boling Arena.
1 of 2

John Fulkerson (10) and Santiago Vescovi (25) share a high five during their game against Arkansas at Thompson-Boling Arena on Tuesday, February 11, 2020.

Olivier Nkamhoua, #21, brings the ball up towards the basket during the game against South Carolina on Saturday, January 11, 2020 at Thompson-Boling Arena.

Tennessee entered the week needing a pair of wins against two other middle of the pack SEC opponents for its NCAA Tournament chances. The Vols picked up a big Quadrant II win over Arkansas in one of Tennessee’s best performances of the season before letting another Quadrant II win slip away late at South Carolina.

Tennessee’s backcourt shined in the Vols’ 82-62 win over Arkansas.

Santiago Vescovi was masterful in what was his best performance of his young career. The Uruguay native recorded a career high 20 points coupled with a career high nine assists. Vescovi was an efficient scorer for the Big Orange as well shooting 60% from the field and 3 of 4 from beyond the arc.

Jordan Bowden hit two 3-pointers for the first time since Jan. 7 scoring 16 points against the Razorbacks. Bowden was good all around against Arkansas grabbing six boards and dishing out three assists.

Tennessee’s backcourt received a nice boost against South Carolina when freshman Josiah-Jordan James returned from injury in his return to his home state. James did a little bit of everything for the Vols against South Carolina. The left hander knocked down a pair of triples on his way to scoring nine points.

The rest of Tennessee’s backcourt struggled in James’ debut as Vesocvi scored just seven points. Vescovi would dish out five assists but also turned it over four times, including a late turnover that led to South Carolina’s go-ahead free throws.

Bowden wasn’t much help for Vescovi either as the senior struggled in Columbia, shooting just 1 of 7 and scoring five points.

Tennessee’s backcourt as a whole struggled late against South Carolina as the Vols failed to get good shots, or shots at all, in the final minutes.

John Fulkerson turned in possibly the best week of his Tennessee career fighting through the flu to play against South Carolina before turning in a career high 25 points at South Carolina.

Fulkerson wasn’t on the court for the final 35 minutes of warmups or the national anthem Tuesday night, but as they began to announce starting lineups Fulkerson made his way from the locker room to the Vols’ bench.

Despite the illness, Fulkerson dominated Arkansas’ frontcourt scoring 14 points on six shots while grabbing eight rebounds. Rick Barnes praised Fulkerson’s toughness and the junior’s understanding of how important every game at this point of the season is.

The east Tennessee native gave the Vols a strong chance to win in Columbia scoring 25 points and grabbing nine rebounds. Fulkerson did have some simple, but big mistakes at South Carolina, turning it over six times and missing five free throws.

“I think turnovers for myself and missed free throws really kind of dictated the game,” Fulkerson said postgame. “I think if I don’t turn it over and I make my free throws we win the game easily. I really put this all on myself.”

Yves Pons was the model of consistency for Tennessee on the week, giving the Big Orange a pair of solid, complete performances.

Pons scored 12 points on 5 of 8 shooting against Arkansas while grabbing four rebounds and blocking a shot.

Pons followed it up scoring 13 points in the loss at South Carolina. The junior from France also recorded seven rebounds and three blocks.

Tennessee’s offense turned in its best performance of the season against Arkansas as the Vols scored a season high 82 points. The win marked just the second time this season Tennessee scored in the 80s.

The Vols diced up the Razorbacks defense shooting 49% from the field and 38% from 3-point range. Tennessee did a great job of attacking Arkansas’ smaller lineup getting to the free throw line 30 times, making 24.

Tennessee recorded 11 turnovers in the win, but a handful came late against a desperate Razorback’s defense.

Facing off against an always tough South Carolina defense, Tennessee’s offense came back down scoring 61 points in the loss.

The Vols shot a respectable 43% from the field, but Tennessee struggled to take care of the basketball. The Big Orange turned it over 20 times in the loss and left 11 points at the free throw line where they shot just 61%.

Tennessee’s defense was stifling against Arkansas holding the Razorbacks 14 points under their season average.

Arkansas shot just 31% from the field and from 3-point range against Tennessee while also turning it over 14 times.

Tennessee’s defense was strong in the tight loss in the Palmetto State holding South Carolina to 40% shooting from the field and 30% from beyond the arc.

The Gamecocks turned it over 14 times against Tennessee as Vescovi recorded three steals and Bowden recorded two of his own.

In two games with a high foul count, the Big Orange struggled to keep opponents away from the free throw line as Arkansas and South Carolina combined for 68 free throw attempts.

Tennessee finally found production from its bench in Tuesday’s win against South Carolina. Davonte Gaines is beginning to carve out a consistent spot in the Vols’ rotation as a high energy defender.

Olivier Nkamhoua played his best game of 2020 against the Razorbacks. The freshman scored 10 points while grabbing six rebounds in 19 minutes’ worth of action.

Jalen Johnson scored just four points on the week, but Barnes clearly trust the junior guard and Johnson gave the Vols 33 quality minutes on the week.

Gaines played his role well against South Carolina as the Buffalo native scored two points and recorded a steal in 15 minutes.

Uroš Plavšić continues to see his role diminish as Barnes looks for results. The transfer played just two minutes against South Carolina, turning it over twice and committing a lane violation.

The growth Rick Barnes’ team has made in the past six weeks was evident in Tennessee’s 1-1 week.

The Vols’ fifth year head coach has done a great job of meshing together Tennessee’s continually changing roster and lineup.

However, Saturday Barnes’ made some decisions he’d probably like to have back.

Leading by six with 3:40 left, Tennessee got way to conservative against South Carolina. The Vols held the ball late into the shot clock, not running action, too often down the stretch.

Tennessee also struggled to adjust when South Carolina switched to a zone defense. The Vols weren’t effective attacking the Gamecocks zone settling for a contested jumper and turning it over.

Tennessee isn’t offensively talented enough to waste the first 20 plus seconds of the shot clock and to expect to get good shots. The Vols’ overcame it two weeks ago at Alabama, but it caught up to them Saturday against South Carolina.

Tennessee was a slight favorite in its win against Arkansas and a slight underdog in the loss at South Carolina.

The Vols played well on the week showing how much they’ve grown through the conference slate, but Tennessee needed two wins this week and they didn’t get them.

Tennessee’s room for error is now razor thin if the Vols want to work their way back onto the NCAA Tournament bubble. A challenging final six games gives Tennessee opportunities to pick up big wins but it’s now or never for this year’s squad.

Students: did one or more of your professors grant you the option to have class online or in-person?