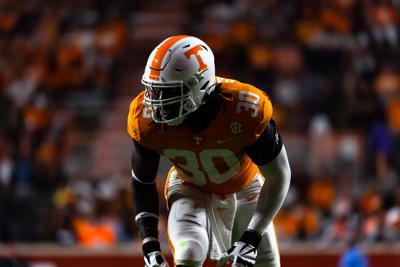 It wasn’t the prettiest 60 minutes of football ever played. The Vols were not perfect by any means, but in the end, the better team won.

The game marked the official introduction of Heupel and his fast-paced offense, which certainly lived up to its expectation of being fast. Its highs were high – the offense operated at breakneck speed and carved up a tired Falcon defense – but the lows were low – several quick drives of three-and-out.

“There are definitely some things that we can clean up and operate,” Heupel said on the issues within the up-tempo offense. “I think that’s part of the passing game at times. There is some decision making in our RPO game that can be a whole lot better. With the adjustment to what we prepare for to what we ultimately see, we have to be cleaner with that during the course of a ballgame.”

To that end, recently appointed starting quarterback Joe Milton opened the game with two impressive possessions. In just five minutes of total play, the Vols drove down the field and scored twice, a four-yard rush from Milton and a one-yard score from sophomore running back Jabari Small.

But on the other side, Tennessee’s offense stalled out after the two quick scoring drives, and the Vols totaled just eight yards of total offense in the second quarter. Their starting center Cooper Mays suffered an apparent leg injury early in the second, causing the offensive line to shift around to fill the hole. There was a noticeable difference in the amount of pressure Bowling Green’s defense got on Milton after this change, and he was unable to get anything going.

With Tennessee’s offense nonexistent, Bowling Green clawed back into it, thanks to a pair of field goals off the foot of Nate Needham. Tennessee went into halftime up by only a score and needing to make some significant adjustments.

Those adjustments did not come in its passing game, but from its running backs Small and Tiyon Evans. The pair of backs each totaled 116 rushing yards and a touchdown, the first time since 2016 that the Vols had multiple 100-yard rushers in the same game. Mays returned to the game after halftime as well, and Tennessee controlled the game on the ground, picking up the slack from Milton and the receivers.

“It’s really easy. Things open up more,” Milton said on the success of his running backs and its impact on the offense. “Those guys had a great game. They pounded for sure.”

Tennessee’s first four touchdowns of the night each came on the ground, before Milton found Cedric Tillman for a 40-yard score late in fourth quarter. Milton had previously looked to Tillman in the endzone twice, but twice overthrew him. The connection was Milton’s second and final completion outside of the first quarter, breaking a streak of 10-straight incompletions.

“I just stopped trying to overreact to things and play calm,” Milton said. “I just tried to react to everything that comes, but I trust my guys up front.”

Now the Vols have some thinking to do. When the offense worked, it excelled, but when it didn’t work, the Vols were one-dimensional. Against a team like Bowling Green they got away with a win, but against the Vols next opponent, Pitt, that might not cut it. They desperately need Milton to take some large strides in the right direction, particularly with his consistency.

“I thought the pass game was really hit and miss from us tonight,” Heupel said. “Some of that was quarterback decision making and being accurate with the football. Some of it was wide receivers being on the same page. (There were) a couple of opportunities to catch it that we didn’t.”

A win is a win, however, and the Vols will take one no matter what. Tennessee will celebrate the win tonight, but it plays a similar team to itself in Pitt next Saturday, and it could be a proving one. The Vols have some cleaning up to do beforehand, that much is certain.

“We came out and played a good game and we won the game, so (Heupel) was giving us props there,” senior defensive back Theo Jackson said. “But he told us we have things to work on and we have to get better for next week’s game.”