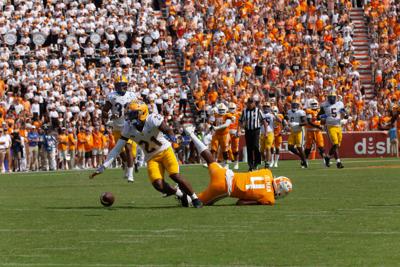 The Tennessee football team dropped its second game of the season, a 41-34 loss to Pitt Saturday afternoon at Neyland Stadium. The Panthers (2-0) came down to Knoxville for the Johnny Majors Classic and handed Tennessee (1-1) its first loss of the season in a sluggish, four-hour game.

Joe Milton III has yet to settle into a good rhythm as a Volunteer. He again showcased his pure natural abilities that makes him a dual-threat, great speed – he finished as the Vols’ top rusher – and an incredibly strong arm. But that same arm also got him into trouble.

Before leaving with an injury in the second quarter, Milton completed 7-of-12 passes for 50 yards. Of his five incompletions, four were overthrown passes, and they weren’t particularly close. One pass did hit Jalin Hyatt in the hands in the endzone, but the sophomore receiver dropped it when he was hit.

When Milton was sacked and came out with an injury, Virginia Tech transfer Hendon Hooker took over and the immediate results were encouraging. Hooker led the Vols on three touchdown drives, passing for two of them himself. He was more accurate than Milton was, and he was also able to extend plays on the ground.

For all the positives, Hooker did make a few mistakes too. Most notably was a fourth quarter interception that gave Pitt the ball back with under five minutes remaining. Pitt was able to run out the clock from there. On the play, Hooker lost sight of the Pitt safety Brandon Hill, who sprinted across midfield to make the catch.

Depending on Milton’s availability returning from injury, head coach Josh Heupel could have an interesting decision to make at quarterback going forward.

“Hendon did a great job coming off the bench, competing, giving us a chance, making some plays with his feet and being decisive with the ball in his hands,” Heupel said. “There are things he would want to do better and do differently . . . but I thought our football team rallied around him, believed in him, and he went out there and competed.”

This loss stings more to the Vols than any other loss would. Not because of the emotions of honoring the legendary head coach Johnny Majors, but because if Tennessee really had wanted to win this game, it could have by a wide margin.

Tennessee jumped out to a 10-0 lead but never could put Pitt away. From Milton’s overthrows to 13 penalties that cost the Vols 134 yards to failure executing in the redzone, the Vols seemed to waste any opportunity that Pitt handed to them.

Early in the second, the Vols had driven down to the Pitt three-yard line, but a false start, unnecessary roughness and offensive pass interference penalties pushed them to a third and goal at the 37-yard line. Tennessee had a prime chance to punch it in – a touchdown would have put Tennessee up 10 at the time – but it settled for a field goal. Pitt took the lead on the next possession.

But that was only the tip of the iceberg for Tennessee. In the third, Theo Jackson ran a missed 55-yard field goal 100 yards for a touchdown, but block in the back penalty on the return negated the result. Even Jackson’s decision to run the ball out hurt the Vols – if he had let the kick go, the Vols would have taken over at their 38, where Pitt kicked from. Instead, Pitt got to re-kick because of the penalties, chose to punt, and pinned UT at the three, a 35-yard loss for the Vols.

It was the small mistakes like these that piled up, and ultimately cost the Vols.

“It did surprise me. It’s not who we’ve been,” Heupel said. “You add up all those little things, there’s a lot of opportunities to change the scoreboard, both offensively and special teams too. I’m disappointed we didn’t take advantage of some of those opportunities.”

As if the mistakes and the quarterback inconsistencies didn’t present enough of a challenge for the Vols, a plethora of injuries did. By the time it was all said and done, Tiyon Evans, Hyatt, Milton, Jabari Small and Cooper Mays were unavailable due to injuries suffered before or during the game. And just on the offense alone.

All the injuries made the loss that much more infuriating for the Vols, who remained competitive until their last drive in a game played without that many starters.

The status of those players remains in the air as of now, but knowing they can survive without them gives the Vols confidence for their matchup with Tennessee Tech next week.