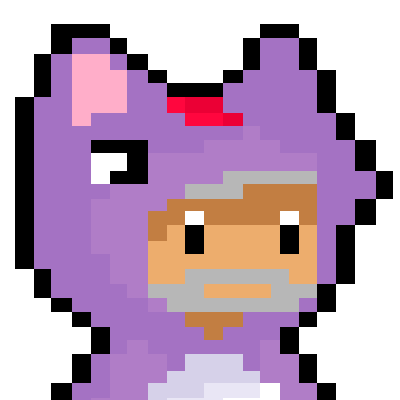 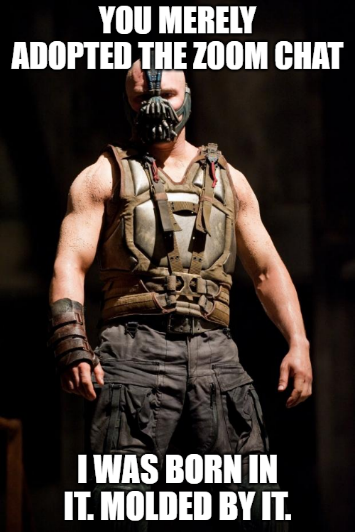 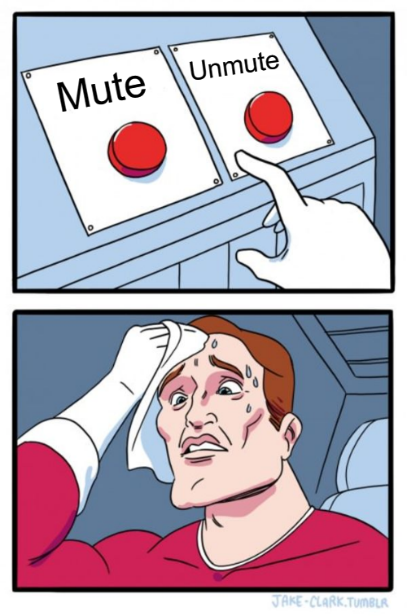 The Chancellor has spoken. Classes have gone online. Zoom will save our learning.

And now you’re a streamer. You’ve spent the break mastering Zoom and are ready to engage your students and complete their education for the semester.

I am sure there is plenty of trepidation as you learn how to navigate teaching with a webcam, sharing your slides via screenshare and the ever-present dread of being muted for the first 10 minutes of your presentation.

Fear not colleagues. The world of online video and online teaching is not all that scary. Many of your students have never known a world without such technologies.

To them, the world of watching other people do things on the internet is second nature. Armed with this nascent ability to quickly come to terms with learning in a digital environment, your students come well equipped for using the chat box feature during your course.

Nevertheless, congratulations. All of you getting ready to use Zoom every day are about to become professional streamers. With that knowledge, I thought it would be helpful to introduce you to some things that may sound strange, but many of your students see these behaviors as part of the norms of interacting in chat with a virtual presenter. I connected with a few of my students and asked what some of the chat norms are that they use all the time but may look a little strange to the rest of us.

Consider this your primer to “Zoom Chat” so that you won’t be too caught off guard when one of your students uses one of these “strange” sayings in chat.

Starting with an easy one that on first glance may seem strange but is really, quite simple. When a student types kek in chat, generally it is a replacement for the LOL acronym. “Why not just use, LOL?” Well, because kek is nerdier.

If your chat gets flooded with the single letter “F,” do not freak out. Your students are not cursing you out. This chat norm reportedly originating from a Call of Duty cut scene where the game asked you to “Press F to pay respects” during a funeral screen. It has since been adopted to represent anything bad happening and a streamer asking for an “F” in the chat.

No, not the little round cardboard disks that kids collected in the ’90s, though they are related to the meme. PogChamp refers to an emote commonly used on Twitch which uses the face of Ryan Gutierrez, better known as Gootecks, making an open-mouthed shocked face. It was later spread through internet forums when Gootecks was featured in an ad winning a Pog game using a video game controller. It is commonly used when something exciting or special happens.

Like kek from before, only this is kind of a perversion of the LOL phrase, and truly represents the silliest of disasters in streaming.

In relation to “owo what’s this,” it’s important to know what copy pasta is. This sounds like what you think: when something (usually lengthy) is written or said, and then the rest of chat continuously copies and pastes the exact text over and over again.

Note: Not to be confused with: creepypasta, which is fan made horror stories.

This is a reference to a Twitch emote using Josh DeSeno’s face. DeSeno was an early developer for Twitch chat, and as was the custom at Justin.tv (now Twitch), he added his face as an emote Easter egg. It caught on, and the rest is history. Usually dropped at the end of a phrase to represent sarcasm. But also … well … it’s Kappa. It is commonly just spammed a lot for no real reason at all.

Because Zoom doesn’t actually have emotes, many of these words are just strange. Monkas may be the strangest when not accompanied with the picture. But it represents the emote of Pepe the Frog sweating—which is used when you are feeling particularly anxious or nervous about something.

Pepe the frog is a wildly controversial image because of its more recent utilization by many alt-right nationalist communities. This article isn’t really the place to get into all the details other than to say context is key to understanding whether Pepe is being used inappropriately, so check the link above. The image of a cartoon frog dates all the way back to 2005 and the comic “Boys Club.” The frog iconography has been used in basically every reference imaginable, but the “feels bad man” reference is probably the most common phrase.

This one isn’t really a meme. I just wanted to point out the most common things to happen during a streaming session. When you start talking, watch your zoom chat closely. If your microphone is still muted your students will be very quick to point it out.

It is considered proper etiquette to mute yourself when you are not talking. This goes for your students, too. There is a setting in Zoom that allows all participants to enter the session with “mute turned on.” I highly advise you to use that setting. More settings options can be seen here.

Hopefully, this handy guide to chat norms will save you a small amount of embarrassment when your students start interacting in a way that may seem … well … different. I’m not saying all of you will experience this, nor am I suggesting all students should use these when in your Zoom classes this semester.

If anything, now when your cat knocks over your webcam and you fall out of your chair during your first Zoom session, you will know to ask for F’s in chat, and it will be the biggest sign of respect you can receive from your students.

Jason is a data analyst in the College of Arts and Sciences, and the advisor to the Esports Club at UT. In his free time, he pretends to be a streamer on Twitch and YouTube, while constantly getting schooled by college students who actually know how to play video games. He can be reached at jsmether@utk.edu.