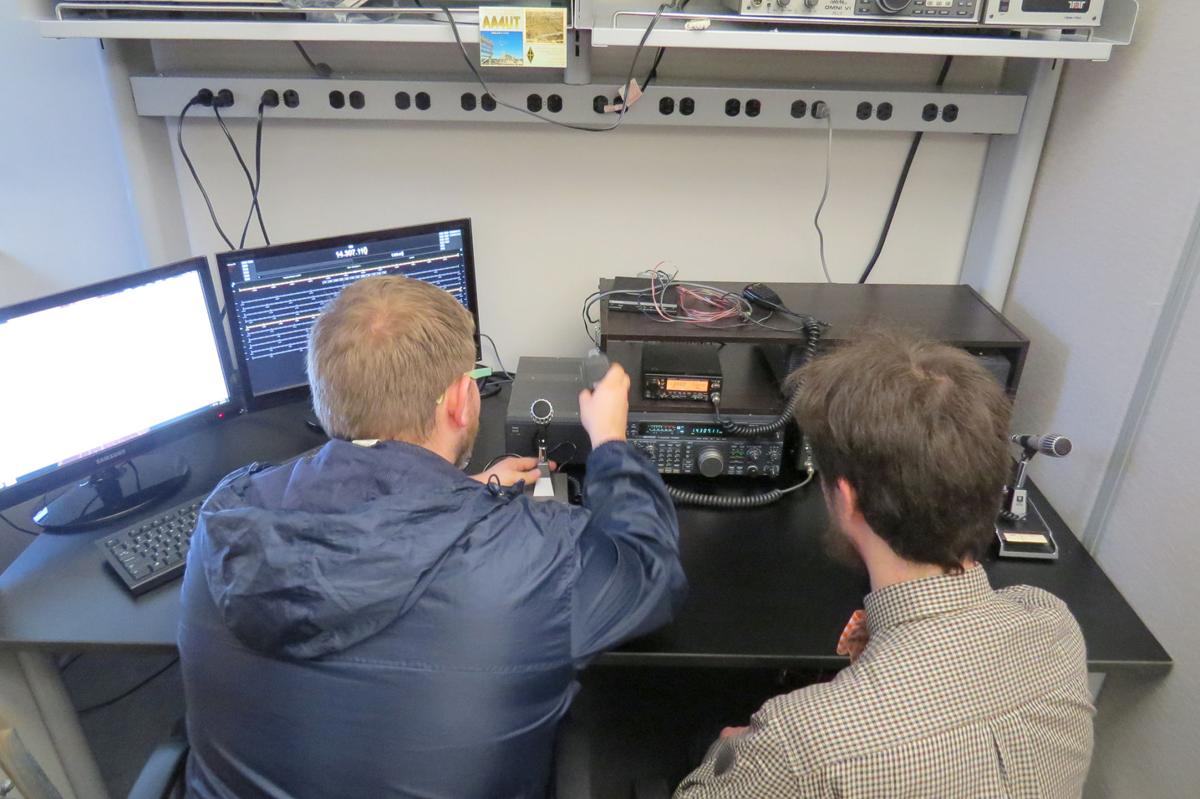 Students Ben Johnson and Mikhail Kravchenko demonstrate how a short-wave radio is operated. 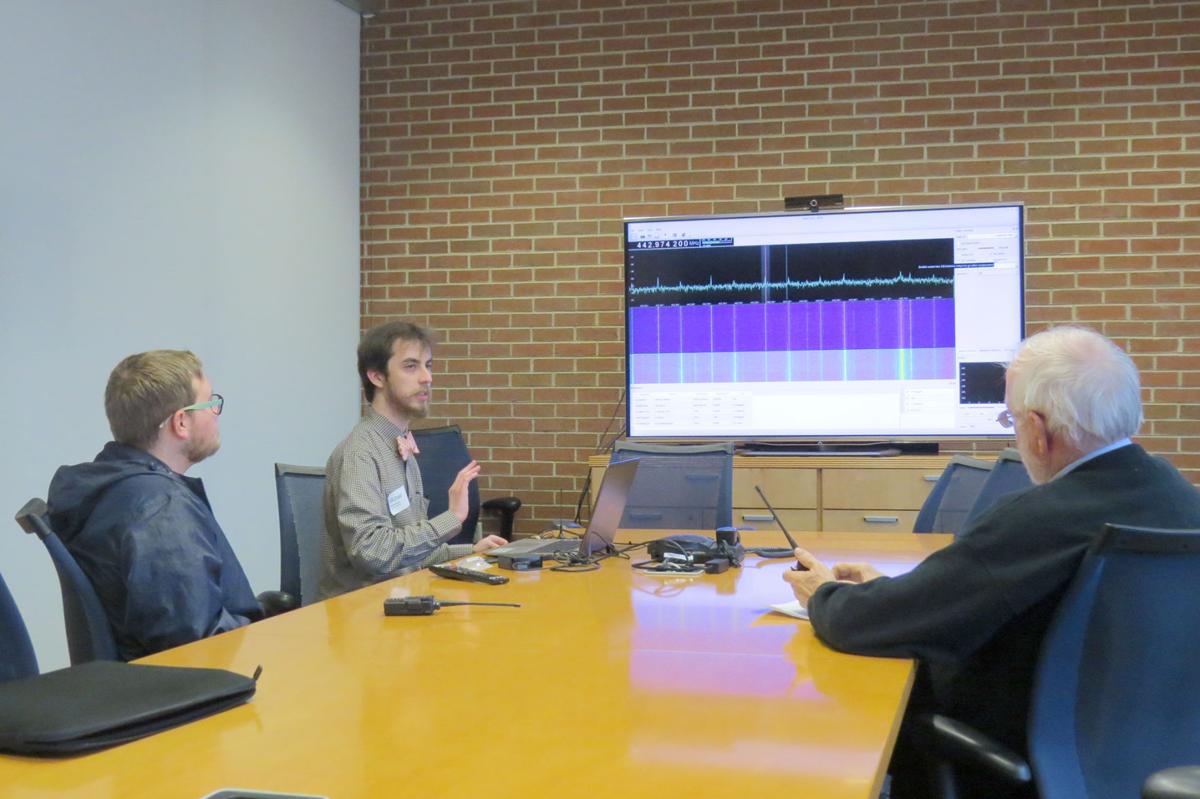 Students Ben Johnson and Mikhail Kravchenko demonstrate how a short-wave radio is operated.

At a meeting early in February, Mikhail Kravchenko, senior in electrical engineering, showed his dongle to the other members of the Amateur Radio Club.

For those who do not know, a dongle is defined as “a small device able to be connected to and used with a computer, especially to allow access to wireless broadband or use of protected software.” Technically, a flash drive is a dongle, but Kravchenko’s was a chip that contained all software and hardware to interface with a wide range of communication channels, broadcast and television.

Students involved in the Amateur Radio Club work with devices like this weekly at club meetings to explore the growing field of communications technologies.

David Icove, professor in electrical engineering and computer science and faculty advisor to the group, has seen the club’s participation fluctuate over the years, from over 20 members to the current six. As a result, the focus of the club varies widely with the students who populate it.

“I went to England last year and saw Bletchley Park, where all the (WWII) code-breaking was being done on the enigma machine. They spent a lot of time doing code breaking, and one of the things they spent a lot of time on was Morse code,” Icove said. “We thought to automate this and allow them (students) to use a software, computer-controlled radio that understood Morse code and transmitted and received it.”

Software-defined radio is meant to be a very portable, accessible means of communication. Icove said many devices come with a strap to carry the radio across your back, so amateurs can carry their device to the mountains as a self-contained unit.

However, the portability and small size of the technology does not diminish its power.

“With software-defined radio, you can take signals that you can hardly even hear, but you can see using some computer analysis, and you can code and decode it,” Icove said. “They’re on the cutting edge of technologies.”

Aside from tech hobbyists, many professionals may also find use for amateur radios, including many emergency services.

“A lot of interconnected fields are in this,” Icove said. “A lot of nurses are cross trained as amateur radio operators, because in cases of emergency, they need to be able to get in and interact with the communication centers.”

Icove and club trustee Bobbie Williams are certified by UT’s ELC office to provide emergency radio service for the university in case of a communications shutdown. Although no current students in the club are certified, a former graduate student in 2015 had undergone courses for ELC qualifications.

While amateur radio may seem like a solitary pastime, national events make sure to form an extensive community for clubs across the country.

Williams described the American Radio Relay League (ARRL) School Club Round Up, which took place on Feb. 8 this year, as one such event. He said that the contest requires participants from an elementary to university level to make as many “contacts” with other receivers as they can within a week.

The three categories of contacts are “individual, which is just regular hams (amateur radios), clubs with club call signs and schools.” For each category contact, participants earn a different amount of points, and at the end of the week, winners are announced.

The ability to make contacts depends on the device’s signal, weather conditions and the strength of the instrument in general.

For the past three years, Williams said UT’s Amateur Radio Club has excelled at the university level with over 100 contacts.

Outside of the contest, club members have the opportunity to connect with a worldwide audience via their satellite stationed on East Stadium Hall.

“From that room, we’ve probably talked to about every country and earned a DXCC award (an ARRL premier award for contact with over 100 countries),” Williams said.

As each member becomes a part of the amateur radio community, they earn a callsign. For example, over the air waves, Icove is known by the sequence WA8NQE.

Although Kravchenko and Adam Rosenbaum, senior in computer engineering, are relatively new to the club, they already have call signs of their own — KM40QG and KM4RBR, respectively.

Rosenbaum joined the club after he got his technician’s license and heard of what the members were working on.

“Before I got involved, I thought ‘Oh talking on the radio. Whatever, it’s not that big a deal,’ because I had done that before when I was in the military,” Rosenbaum said. “There’s a lot more things to do than meets the eye … It’s a lot more involved than just sitting around scanning bands.”

In addition to national contests and reaching out to find contact, Rosenbaum mentioned foxhunts — “guys going out with their radios and trying to find something in the woods.”

As a computer engineer, Rosenbaum is primarily interested in the different ways of sending digital information through radio, versus traditional analog waves.

Williams planned to discuss one of these methods of sending digitized information, JT65, in an upcoming meeting. JT65 was originally developed to bounce signals off of the moon, so as a result, it uses a low signal to noise ratio. This is just one of the examples of how radio communication means can be customized to fit the need.

For Icove, the relevance of amateur radio will only continue to grow with improvements in technology.

“The technology is such a moving target that if the students stayed in the group form their freshman year to their senior year, the technology being introduced would be completely changed,” Icove said. “There are a lot of things that we think we have the edge on, but we really don’t.”