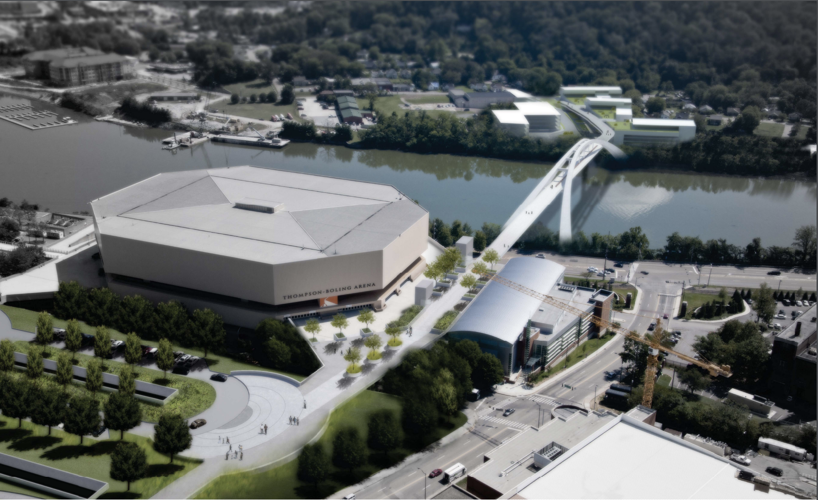 A new pedestrian-bicycle bridge, projected to cost between $50 million and $55 million, is proposed to be built across the Tennessee River to expand UT's campus to the south. 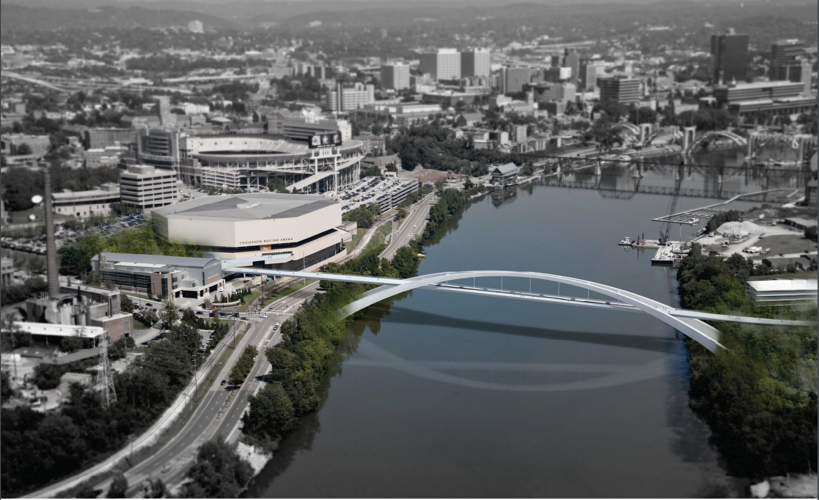 UT, the City of Knoxville and Knox County are partnering to begin funding a new pedestrian-bicycle bridge which will extend the boundary of campus south of the Tennessee River if constructed. 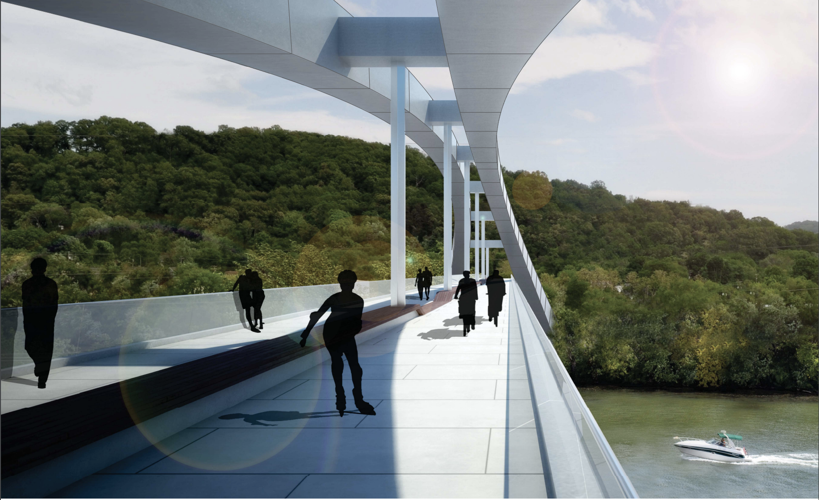 UT Knoxville, the City of Knoxville and Knox County are partnering in a proposal to build a pedestrian-bicycle bridge which will connect campus to the south shore of the Tennessee River.

A new pedestrian-bicycle bridge, projected to cost between $50 million and $55 million, is proposed to be built across the Tennessee River to expand UT's campus to the south.

UT, the City of Knoxville and Knox County are partnering to begin funding a new pedestrian-bicycle bridge which will extend the boundary of campus south of the Tennessee River if constructed.

UT Knoxville, the City of Knoxville and Knox County are partnering in a proposal to build a pedestrian-bicycle bridge which will connect campus to the south shore of the Tennessee River.

Knoxville is one step closer to building a pedestrian bridge over the Tennessee River after the Knoxville City Council approved the use of up to $150,000 for private grant writing services in a bid to secure federal funding for the expansive project.

The resolution, approved Jan. 10, authorizes Mayor Indya Kincannon to execute an agreement with CDM Smith, Inc., a private engineering and construction firm selected to help the city submit an application for a federal RAISE (Rebuilding American Infrastructure with Sustainability and Equity) grant by the Feb. 28 deadline.

In December, the U.S. Department of Transportation announced that the popular grant program would provide $1.5 billion in funding for “projects with significant local or regional impact” in 2023. The funds are an extension of the Biden administration’s massive investment in infrastructure, a core reason why plans for the bridge have been resurrected.

If constructed, the pedestrian-bicycle bridge would span from UT’s campus to the South Waterfront, connecting downtown Knoxville and campus to South Knoxville and the Knoxville Urban Wilderness.

The RAISE grant would provide a maximum of $25 million in funding, though the project is projected to cost $55 million. Additional funding is expected to come through partnerships between the UT system and state, county and city government.

As part of the grant writing process, the city will hold a public meeting at the Kerbela Temple at 315 Mimosa Ave. on Feb. 13 from 4-6:30 p.m. to hear feedback, especially from residents of South Knoxville.

Visions of a pedestrian bridge have loomed in the city’s imagination since the idea was first raised during “Nine Counties, One Vision,” a public planning process involving Knox County and its surrounding counties in 2000. In 2006, more formal plans for the bridge appeared in the city’s South Waterfront Vision Plan.

The bridge remained a distant goal for years as funding efforts failed, including an unsuccessful application for a TIGER (Transportation Investment Generating Economic Recovery) grant from the U.S. Department of Transportation in 2015 under Mayor Madeline Rogero.

Plans for the bridge gained fresh momentum last spring when the UT Board of Trustees voted to extend the official boundary of campus beyond the river to include a parcel of land along Scottish Pike and W. Blount Avenue. UT now sees the land on the South Waterfront as a vital means of building beyond the traditional campus boundary to accommodate a historically large student population.

The pedestrian bridge, with a projected landing near Thompson-Boling Arena, would allow UT to build additional dormitories and facilities across the river once the university acquires land on the South Waterfront.

Unlike other cities in Tennessee like Nashville and Chattanooga, Knoxville has no pedestrian bridge to connect the downtown area with other parts of the city. This absence has been cited as part of the city’s disconnect from the Tennessee River.

At the City Council meeting, Mayor Kincannon was optimistic that the grant writing process would make clear the need for the bridge. Kincannon said representatives of CDM Smith, Inc. would be present at the public meeting in February to hear community feedback.

“This pedestrian bridge is a vision that’s been part of this community for more than two decades. It just so happens that the stars may be aligned as far as the partnerships and collaboration between here and the city, county, UT, the private sector and the state,” Kincannon said. “The federal government has passed legislation that has invested … a lot of money in infrastructure and Knoxville deserves a slice of that pie.”

Councilwoman Lynn Fugate said she had hope that the bridge would “reconnect us to the water.” Fugate was one of eight council members who voted in favor of the resolution to fund the federal grant writing process.

Only one council member, Councilwoman Amelia Parker, dissented. She expressed concerns about the area of the South Waterfront which the bridge would land in, which is made up of residential streets and scrappy industrial plots.

“A pedestrian bridge to Scottish Pike is absolutely a bridge to nowhere, so I’m very confused about this project,” Parker said. “My apologies to the residents of Scottish Pike, I think you all would agree with me. I don’t think you would want a whole bunch of people just dumped into your neighborhood without a plan.”

Calling the $150,000 for private grant writing services a “horrible waste of money,” Parker said there were other infrastructure projects, such as updates to roads in low-income neighborhoods, that required more immediate attention.

“I don’t understand the public benefit to the city at all. I see the benefit to UT. It expands their housing options, but I don’t think it solves our problems as a city,” Parker said. “I think students will still drive from Scottish Pike to UT campus, even with a pedestrian bridge there.”

Mayor Kincannon shared in the concern about where the bridge would land on either side of the river, citing the John Seigenthaler Pedestrian Bridge in Nashville as an example of a bridge that is underused because it leads primarily to parking lots for Nissan Stadium.

“We can learn from the successes and less successful projects that have happened across the state and around the world,” Kincannon said.

Funding for CDM Smith, Inc.’s services is not part of a capital improvement project, and did not require a vote as part of the city’s official budget. The up to $150,000 in funds will be diverted from previous funding for the 20-year South Waterfront Redevelopment and Vision Plan, adopted in 2006.

As of February 2022, the South Waterfront had received $61 million in public investment and $400 million in private investment as part of the plan. Developments include the One Riverwalk apartment complex and Regal Cinemas national headquarters building.

Though the federal grant application process is the culmination of years of work and unprecedented stake from UT and the city, plans for the bridge remain in early stages and plans for developing the south landing area off Scottish Pike and W. Blount Ave. are still largely undefined.