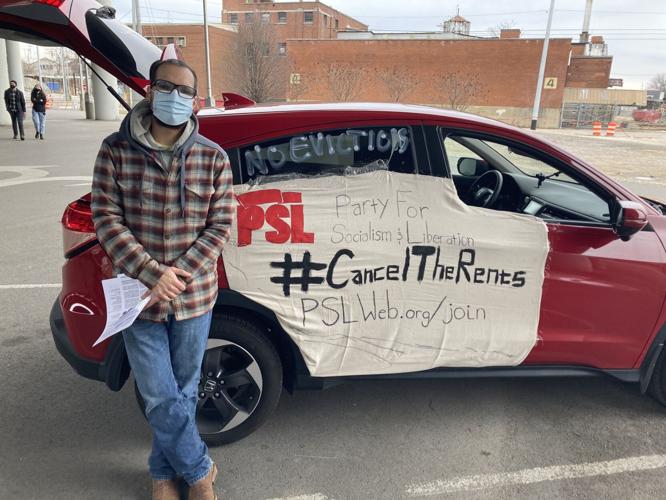 Organizer Dan Warren-Castillo stands near their car at Saturday's 'Cancel the Rent' protest. 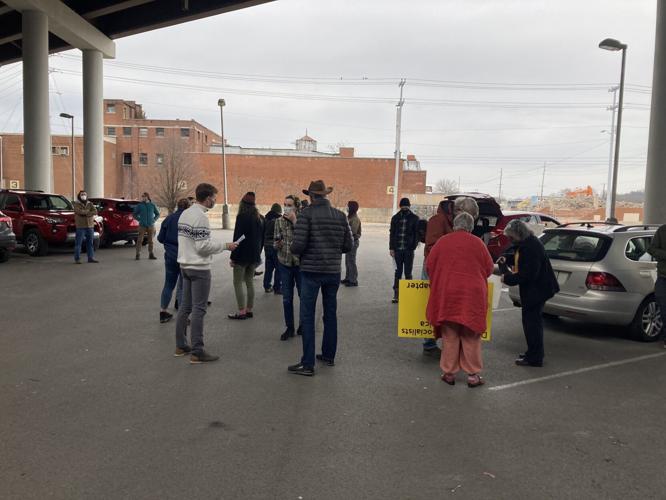 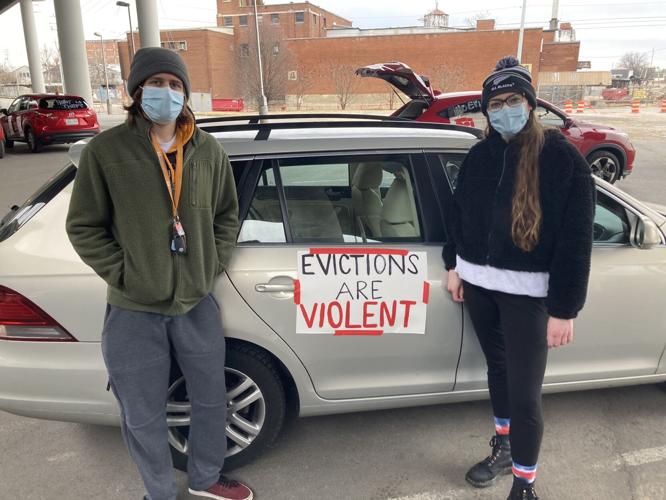 Protestors pose with their car at the caravan-style protest.

Organizer Dan Warren-Castillo stands near their car at Saturday's 'Cancel the Rent' protest.

Protestors pose with their car at the caravan-style protest.

On Saturday afternoon, in a parking lot under the James White Parkway, a coalition of Knoxville area left-wing activist groups met for a “cancel the rent” car caravan protest in support of the cancellation of rent and mortgage payments through the end of the COVID pandemic.

The coalition, composed of the Party for Socialism and Liberation, the Democratic Socialists of America and Statewide Organizing for Community eMpowerment, has been advocating for rent and mortgage cancellation since April 2020 by planning COVID-safe protests and by raising awareness of the options available to East Tennessee residents who are facing eviction.

After coalescing under the highway off of Jackson Avenue, protestors got into their cars and drove in a caravan along a pre-planned path which included many working-class neighborhoods where residents have struggled to make rent and have built up debt during the pandemic.

Many of the 15 or so cars in the caravan were painted with messages reading “Rent is theft” or taped with signs stating that “Evictions are violent.”

Adam Hughes, a member of SOCM, says that the coalition has been visiting eviction courts and informing residents of various resources, including the Center for Disease Control’s eviction moratorium, which was recently extended through the end of March.

“We’ve heard that Tennessee was having and will have in the future a rash of evictions around the pandemic, and we don’t think anyone should get thrown out of their house, especially during a pandemic,” Hughes said.

The CDC moratorium prevents residents from getting evicted, but it does not cancel out rent payments, which will come due when the moratorium ends.

Dan Warren-Castillo, who organizes with the PSL, says that the moratorium is insufficient, and is only a temporary fix.

“There are people who have not been able to pay rent since last March who are still not able to pay rent who thankfully are in their homes right now because of this moratorium, but as soon as that moratorium expires, now they’re going to be on the hook for tens of thousands of dollars that they don’t have,” Warren-Castillo said. “The bottom line is people are going to be evicted, it’s going to be a mass homelessness crisis and the only way to stop it is to cancel rent.”

The first question that Warren-Castillo says skeptics ask about rent cancellation is, what will happen to landlords who need to make payments? Warren-Castillo says that mortgage cancellation would relieve much of the payment burdens facing landlords. But they also say that when landlords are still unable to make payments, the federal government should step in to ensure that no one goes homeless.

“The government has shown that it’s able and willing to pump infinite money into big bankers and into Wall Street to save these rich people,” Warren-Castillo said. “So what we’re saying is that money needs to be pumped to us, the people, and that includes the small landlords who do need to pay their mortgages.”

Jupiter Brown, a senior at UT studying social work who organizes with the PSL, thinks that the question of affordability itself displays a bias in favor of wealthy Americans and corporations.

“Who in the mainstream media or the government ever asked how we could afford two corporate bailouts in a little over a decade, or trillions of dollars worth of imperialist wars for oil, or the estimated $2.2 trillion tax cut Donald Trump gave to the rich? Keep in mind that the federal reserve created $2 trillion out of thin air to support the stock market back in April. We can afford to provide a serious response to the pandemic — we choose not to afford it.”

Many attendees of Saturday’s protest see the issue of rent and mortgage cancelation not simply as a matter of fairness or economic responsibility, but as a matter of life and death. In temperatures below freezing, a spike in the homeless population could pose serious threats to the city’s public health.

Barbara Hickey, chair of the Knoxville chapter of the DSA, says that without rent and mortgage cancellation, the U.S. could see a financial crisis unlike any in recent history.

“I think we’ll see a huge multiplication of our homeless population, people just completely buried in debt, making the 2008 crisis look like a walk in the park, which it wasn’t,” Hickey said.

Despite the difficulties of organizing protests in a wintery pandemic, Hickey and her fellow democratic socialists, who have been fighting for bolder pandemic-related economic relief for almost a year, show no signs of losing momentum.

“We’re in the midst of a housing crisis which was bad before the pandemic started really but it has obviously mushroomed, and people are on the verge of more evictions, so we just think it’s time to get loud and militant about it,” Hickey said.

“Loud” and “militant” may not be the first words an onlooker would use to describe Saturday’s quiet and peaceful car caravan traveling through the working-class neighborhoods of Knoxville, but the limitations of a caravan-style protest are yet another adjustment to the pandemic.

Brown says that the anger activists feel toward state and federal governments is still potent, even if it is contained within the four walls of a painted car.

“We live in a system that’s organized to benefit the rich and powerful instead of the masses, and this is made more and more obvious by the negligent response to the pandemic,” Brown said. “The people who are struggling right now — these are our people, and we can’t just stand by and not come to their aid during this terrible crisis.”