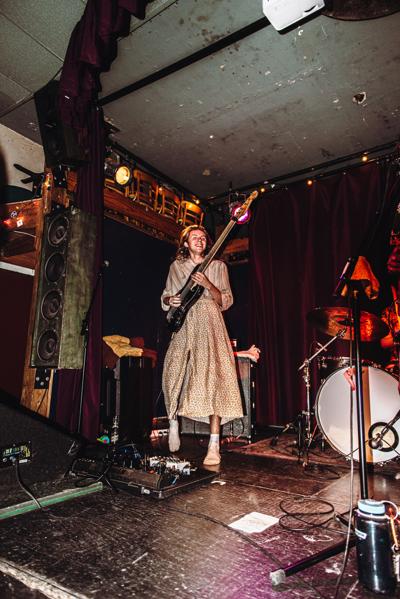 One of Knoxville’s most beloved alternative music venues, Pilot Light, hosted a sold-out show on Friday, Aug. 20, featuring Asheville-based artists Indigo de Souza and Usually, and Knoxville-based band Temp Job. Despite a reduced capacity due to the pandemic, the venue felt as full as ever because of the energetic performers and audience.

“I can never say enough about how important Pilot Light is to Knoxville’s music scene,” Rusk said. “For over 20 years, they have been the city’s most consistent source for experimental and independent music.”

Concertgoers started pouring in around 8 p.m., with proof of vaccination and a mask required at the door. The venue’s anomalous decorations, including a paper-mâché dragon head peering over the door, a David Bowie poster and an eagle wearing a medal, gave audiences something to observe as they excitedly awaited the performers.

After about a half hour of audiences socializing and acquainting themselves with the venue, Indigo de Souza — who was recently profiled in music publication Pitchfork — opened the show with an emotive performance. Dressed in an oversized Harley Davidson T-shirt, de Souza appeared comfortable and intimate on the stage, matched with her unique vocal stylings.

Some of the loveliest moments of her set occurred when she switched between her raw, raspy vocals and the softer, sweeter side of her voice — each one equally compelling. Perfectly matched with the intimacy of the venue, de Souza was unafraid to show the inner workings of a live performance, occasionally asking the sound engineer to adjust her microphone and sweetly interacting with her band.

By the time de Souza performed her latest singles, “Hold U” and “Kill Me,” the audience was clearly enamored with both her and the band. The chemistry between the band was evident throughout the set as they bantered with one another and allowed their instruments to harmoniously flow together.

Once her set came to a close, the audience was appropriately energized for the upcoming band. The next band, called Usually, delivered a high-energy punk rock set. Having just performed their first live show less than a month ago, they seemed extremely comfortable on the stage, like they had been performing for many years.

During their set, audience members could be seen jumping up and down and head-banging, clearly inspired by the rowdy expressiveness of the performance. Instruments and microphones seemed to be turned up to the highest volume during their set, which may feel slightly abrasive to more casual listeners but perfect for hardcore rock fans.

The songs they performed seamlessly blended into each other, like a punk rock DJ set turned up to the maximum volume. By the time their set ended, onlookers were sufficiently engulfed in the unique energy that both bands had brought to the stage, eagerly awaiting the final set of the night, from Knoxville’s very own Temp Job.

Hitting the stage a little after 10:30 p.m., Temp Job brought their unique blend of funk, rock n’ roll and punk rock to the stage in a highly energetic set that drew the most rambunctious crowd of the night. The group maintained its high level of energy throughout the 40 minute set, forming a symbiotic relationship with the audience as they fed off of each other’s energy.

Audience members were entranced by their groovy style of music, some standing on top of the benches as they danced along passionately. The true highlight from the performance was the chemistry that the band brought to the stage. Impassioned saxophonists and energetic vocal performances meshed perfectly with the hard rock of the guitar, bass and drums.

One of Temp Job’s singers, Mia Lucas, explained what it feels like performing at the Pilot Light.

“There is a unique sense of community since the venue is so small and intimate,” Lucas said. “The music there is unparalleled as far as its uniqueness. Even if not every band is my cup of tea, I still go there for the experience.”

Once their set had finished, audience members left the venue feeling liberated and enchanted by a night of dynamic, genre-bending music.