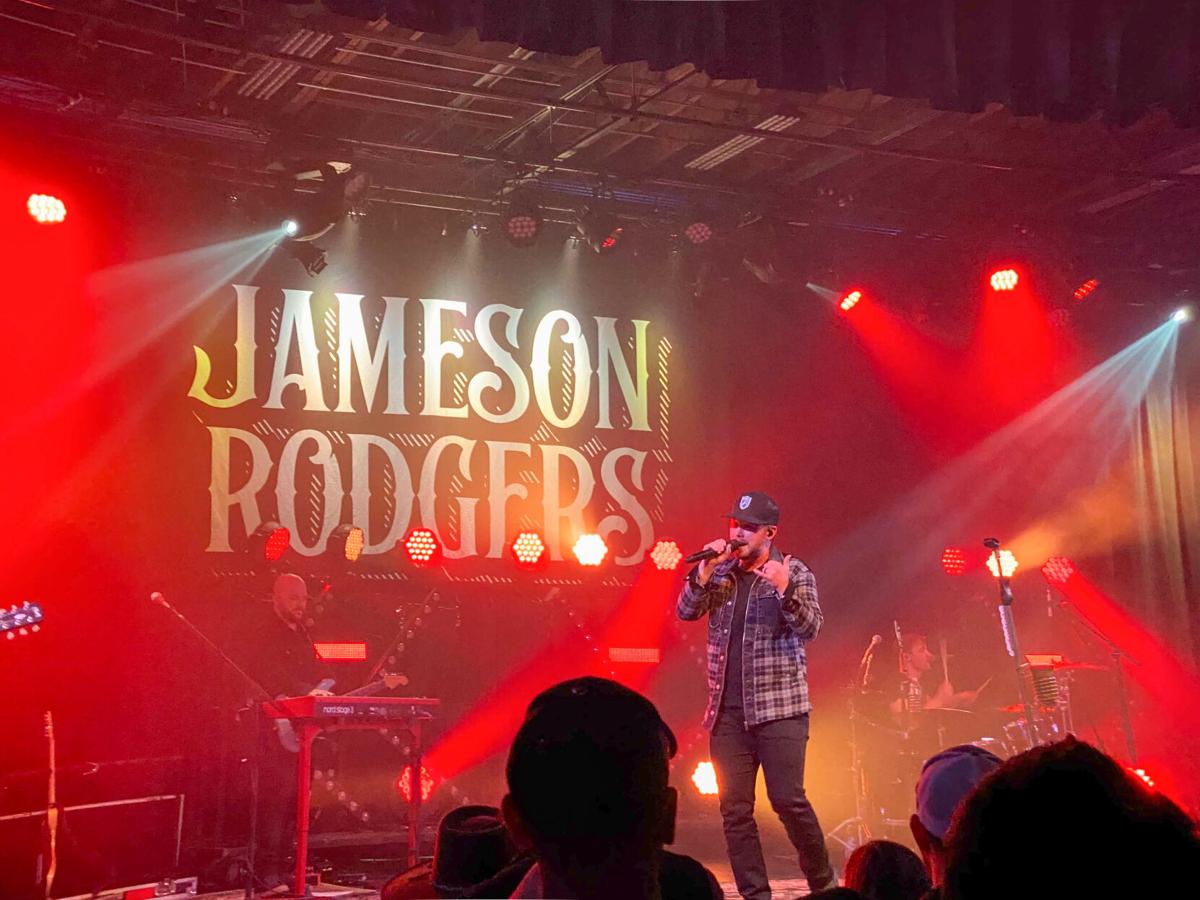 Jameson Rodgers, nominated for Best New Country Artist by iHeartRadio, performs in Knoxville at The Mill and Mine on Friday Nov. 19, 2021. 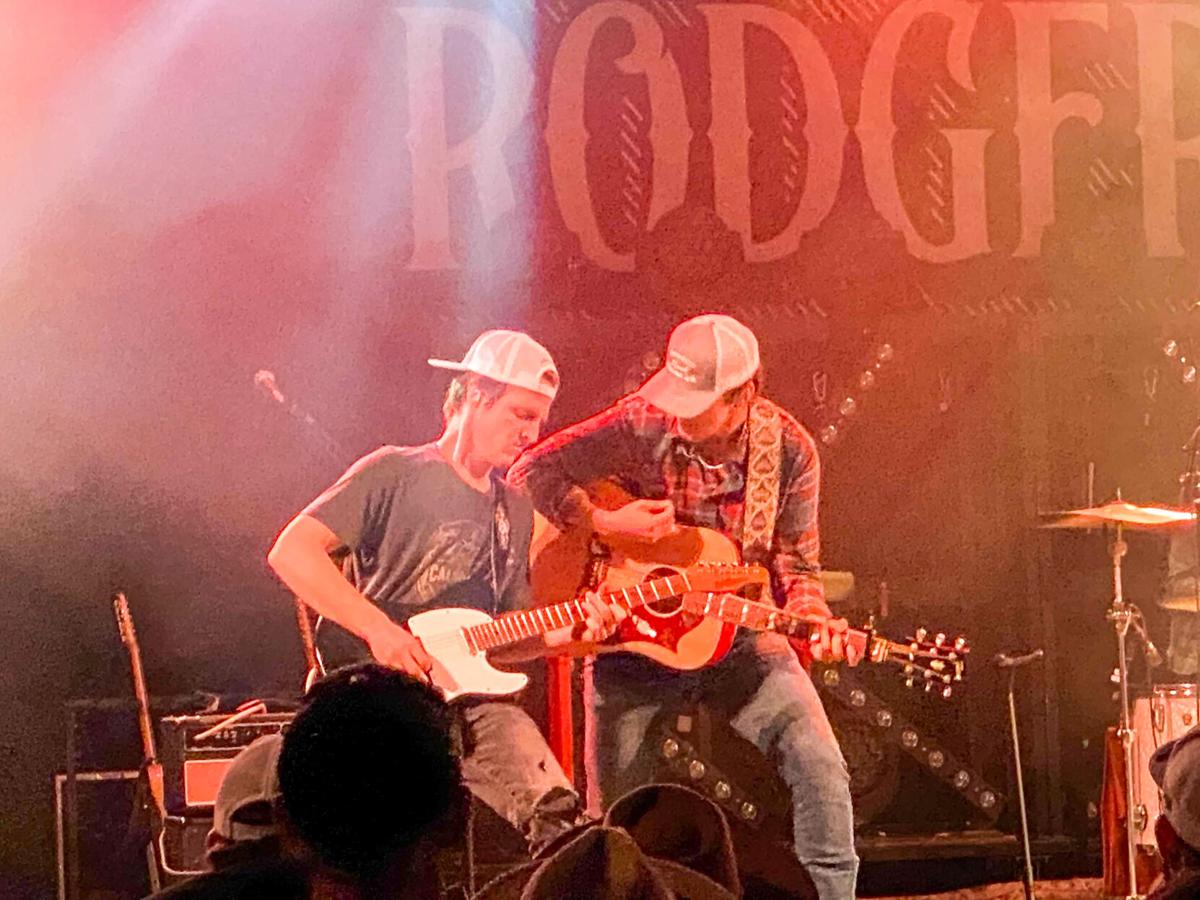 Jordan Rowe (right) and his band open for Jameson Rodgers at The Mill and Mine on Friday Nov. 19, 2021. 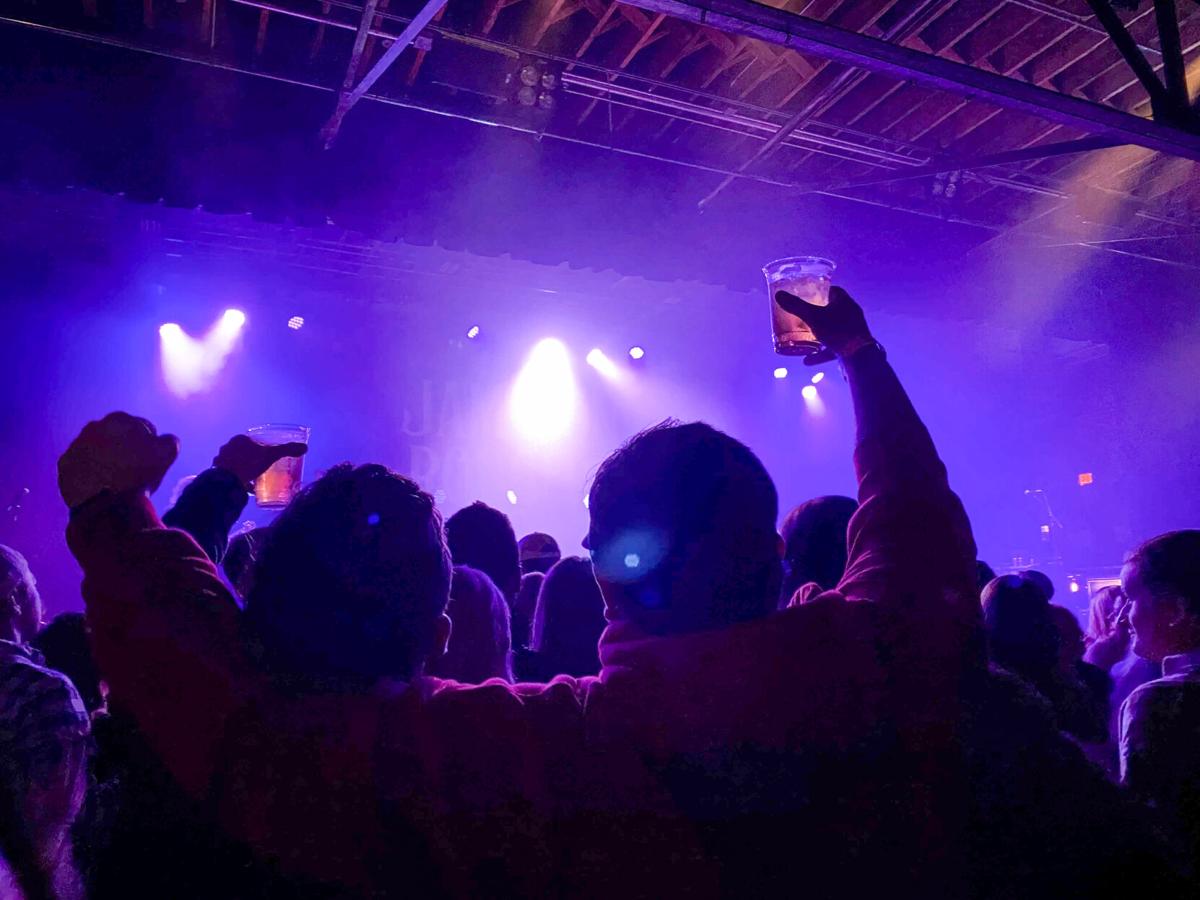 View from the crowd while Jameson Rodgers, nominated Best New Country Artist by iHeartRadio, performs at The Mill and Mine on Friday Nov. 19, 2021.

Jameson Rodgers played to a crowd of country fans at the Mill and Mine Friday, Nov. 19.

The concert took place at the Mill and Mine, located at 227 W. Depot Ave. The doors opened at 7 p.m. as the concert crowd trickled in over time. A little after 8 p.m., Jordan Rowe and his band opened the show. Jamerson Rodgers played afterward at 9:20 p.m. before ending the show before 10:40 p.m.

The venue welcomed the crowd inside the warm and hazy interior, away from the below 40 degrees night. With a coat check for the few people who needed it, the concert-goers mingled before the stage or sat against the wall.

Nearly everyone dressed in either flannel, cowboy hats, sports paraphernalia or like they just got off work. The demographics ranged from around college students to middle-aged groups, with several elder attendees seated around or at the front of the stage.

A functioning bar beckoned people towards it. With a variety of drinks, but mostly beer, it was more uncommon to find someone not holding a drink whatsoever. It helped that some of the songs mentioned or focused on drinking in some way, prompting the crowd to raise their drinks in unison.

People began to fill in the venue before 8 p.m. At around a third full, Jordan Rowe introduced the night’s music along with his band, which included a fiddle player. The lights dimmed as they took the stage at 8:10 p.m. He introduced the crowd with a joke about him being from Georgia, which prompted some jeers.

In total, he played 12 songs in the opening set. He and the band played a mixture of original work, some cover songs and a few unreleased songs. He filled the room with the twang of country as he got the crowd in the mood for the night while they moved their feet to the music.

He paused at different points to talk about being in Knoxville, as well as spend some time talking about farmers in America. He gave a round of applause to farmers and mentioned that some of the sales from the merchandise stand in the corner would go to local farmers. He resumed playing right afterward.

At the end of the set, Jordan Rowe thanked the crowd and left the stage. His band finished up the final song and gave it a big finish while the lights came back on. They concluded a little bit before 9 p.m.

People used this in-between time to talk, drink and greet each other. More people began to come in from the cold outdoors, resulting in a nearly half-full venue. Before the musicians came on stage, the venue played music over the speakers, which got different reactions from the crowd. At one point, they played “Rocky Top” and got most of the crowd to react at the times that they needed to.

At 9:20 p.m., the lights dimmed once more as “Rocky Top” played once more to introduce Mississippi native Jameson Rodgers. He took the stage along with his band. They jumped right into the first two songs of his set, only stopping to briefly greet the crowd.

He mixed some of his newest material along with his popular songs, as well as a few snippets from other bands, primarily The Eagles. For the fifth song he played, he brought out an acoustic guitar to play “Cold Beer Calling My Name.” The crowd raised their several cans of beer along with the song. Afterward, he played a few covers before putting the guitar back.

He brought the guitar back out periodically depending on the song, alternating between using it from song to song. Over the course of his set, he tossed guitar picks out into the crowd. After a ballad with the guitar, he took a break from performing to take a drink and properly introduce the crowd. He toasted the attendees and the venue before jumping right back into the music.

He played some slower songs as the night progressed, including “Good Dogs.” Afterward, he introduced the band members to the crowd, along with announcing that it was one of the guitarist’s birthdays, which prompted him to get on one knee and chug alcohol.

He initially concluded his set with “Bet You’re from a Small Town” and thanked the crowd for coming out and spending their Friday night with the band.

He exited the stage while the band finished the song. After they all left, the crowd chanted for an encore. Less than a minute later, they came back out to play a couple more songs. He began the songs talking about being a songwriter and what these songs have represented as part of his career.

The last song he played was his debut single “Some Girls” while he commented about wanting to play in Knoxville for a long time. He and the band finished the song and left the stage at 10:38 p.m.

With the concert over, attendees left the venue and reentered the cold night. Several people gathered around the outside of the Mill and Mine to talk about the show. One group of concertgoers included new fans Tess Spencer, Bradley Spencer, Mary Lyndal Harrison and Max Waibel.

They talked about the show and their experience with it.

“It was awesome,” Harrison said.

“It was so exciting,” Tess Spencer said. “He wrote songs that I’ve heard on the radio, but I didn’t know he wrote. It was really cool.”

“Plus, it was just a really fun concert experience. Definitely worth a ticket,” Waibel said.

The group had been to the Mill and Mine for concerts before, but it also acted as a venue tour for Harrison and Waibel as they plan on getting married there soon. But, this was the first time they’ve been back in a while.

“We’ve been to many concerts here before,” Bradley Spencer said.

“But this was our first one since COVID-19,” Tess Spencer said. “It was good to get back.”

The group weren’t fans of Rodgers before the concert but became aware of the event because of the Mill and Mine’s Instagram page, saying that it sold them on attending the concert. With only a brief awareness of Rodgers outside of that, they decided to come.

With the rest of the concert-goers moving past them, the group had a concluding remark about the concert and the state of concerts in Knoxville.

“Live music back in Knoxville,” Waibel said. “Bring it back and keep it back.”

Country music twanged in the ears of the concertgoers as they left the Mill and Mine before 11 p.m. on Friday, Nov. 19, with only a handful sticking around outside of the tour bus to catch one last glimpse of Jameson Rodgers.