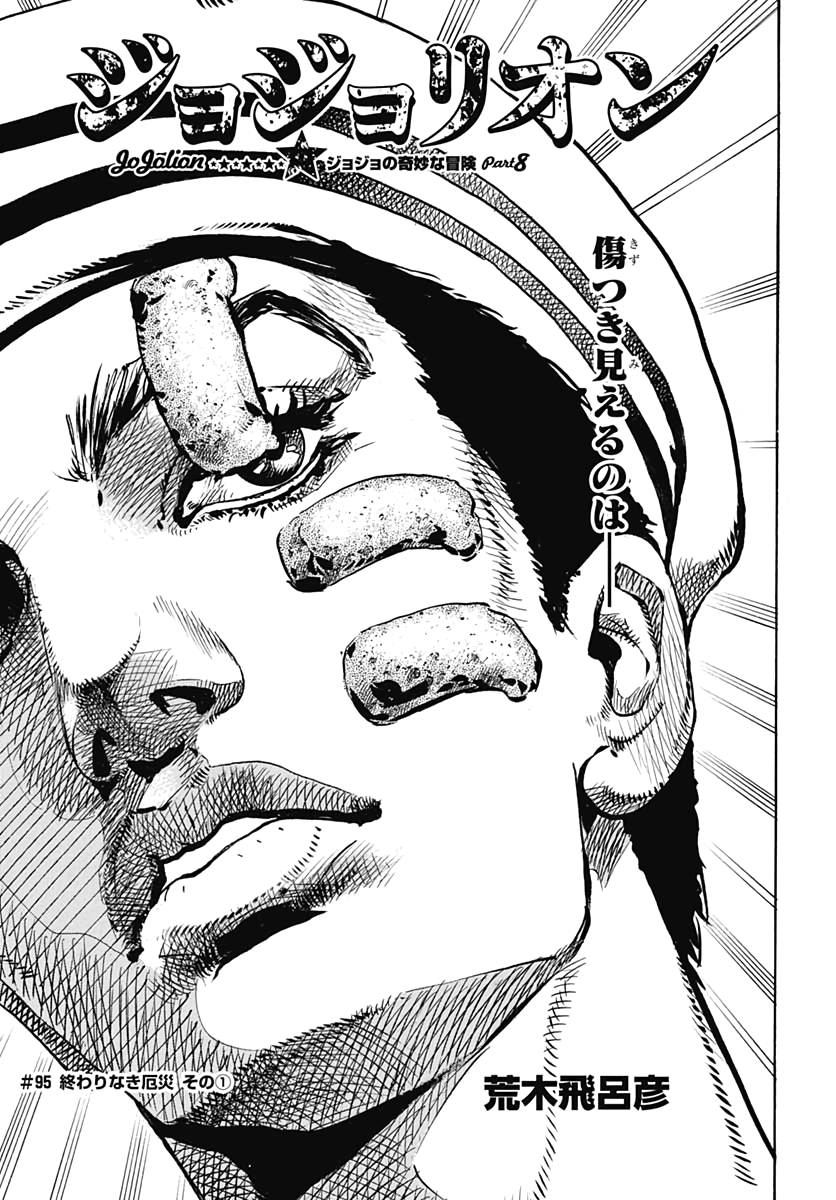 Following up after a one month hiatus, “JJBA: Jojolion” has returned with its ninety-fifth chapter titled “Endless Calamity Part 1,” wherein the drama entwining the Higashikata family and the mortal fate of Yasuo hangs in the balance.

This change in title scheme from “Dangerous Pursuit” to “Endless Calamity” shows that the final battle of “Jojolion” is nigh at hand, as the final villain is within our protagonists sights, but this chapter sure didn’t relate that very well.

The bulk of the chapter was dialogue between the members of the Higashikata family. While the story was pushed forward with the help of some nifty Stand abilities, not much was accomplished in terms of the protagonists resolving their situations. Primarily, this chapter was a win for characters with opposing interests.

Hopefully this results in amped up stakes later in the arc, but as it stands this chapter feels as if it’s a repeat of the events of the previous. After a one-month break you’d typically want to put out an eventful chapter to get people excited again. This chapter certainly wasn’t that.

Although, I was intrigued as I read the chapter; I didn’t feel bored. Simply put, it just didn’t end up panning out into anything mind-blowing like I would have expected.

Despite this, there were some interesting things to note about it, particularly the end of the chapter where we once again received some vague narration by Mitsuba explaining the nature of the final villain’s stand ability.

As the title suggested, his powers truly do revolve around something of an “Endless Calamity,” and it may be possible that the dramatics that have the Higashikata family wrapped up and out of the way, preventing the protagonists’ pursuit of the villain indirectly, may actually be an effect of his Stand.

Furthermore, that vague narration from Mitsuba acted as foreshadowing for the remainder of “Jojolion,” and if readers thought the last couple months have been an endless chaos in this manga, I think they’ll find that “Jojolion will continue to become more and more chaotic until this storyline ends.

One praise I definitely have to give Araki for this chapter is how he depicted the emotions and thoughts of his characters through body language, and through the facial expressions of an individual’s Stand. Even if we don’t know exactly what a character is thinking during these tense situations, it’s always been extremely clear how they feel because of this.

What this chapter made clear was that even if we think some characters are evil, we can’t assign such an absolute moral stamp on them. Even as they commit vile acts, their expressions and body language tell an entirely different story from the actions they perform.

At the end of the day, everyone involved in harvesting the alchemical Rokakaka fruit is acting on their own sense of justice to protect those they love, even if those methods are distasteful.