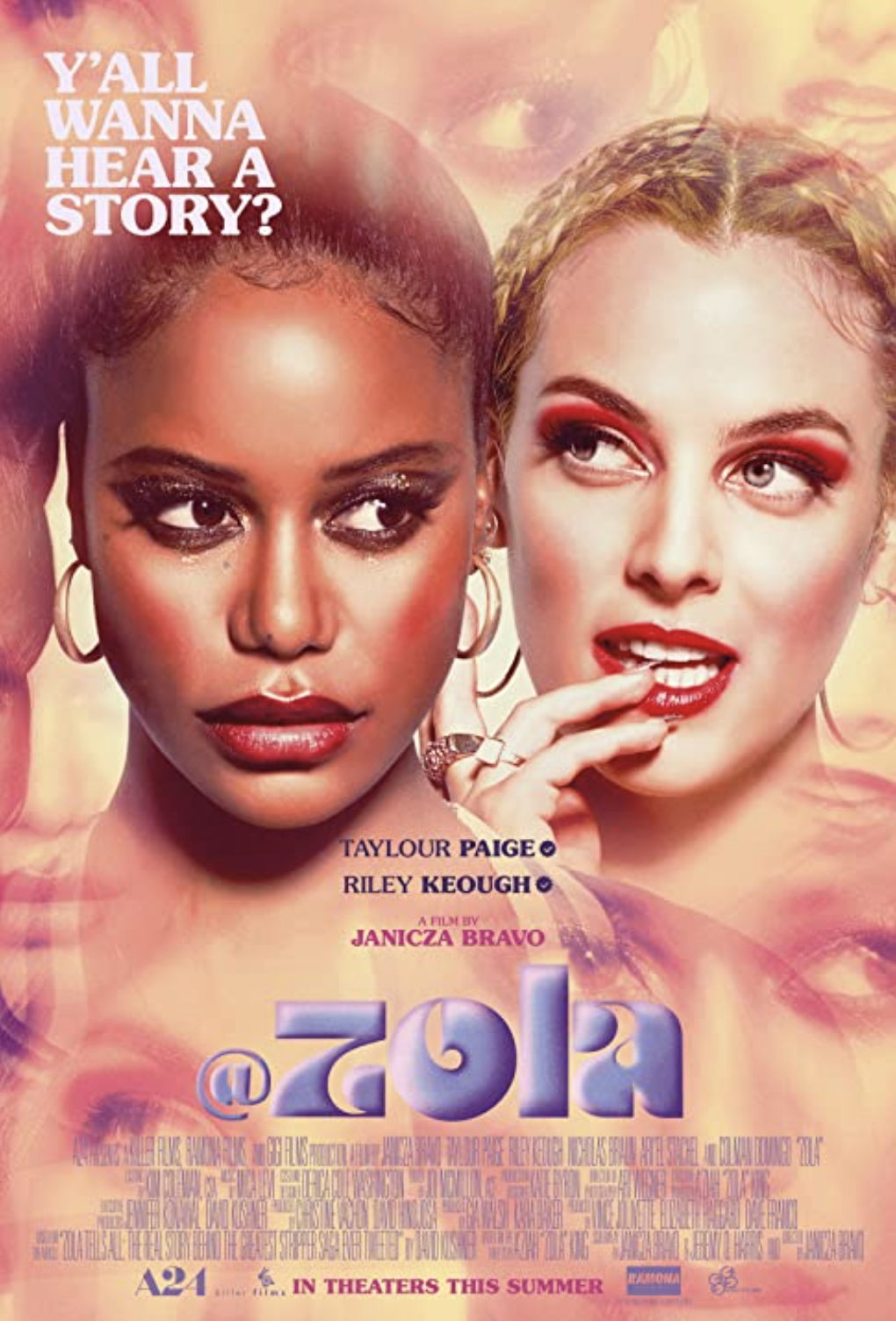 If there’s one thing that we can thank social media for, it’s for gifting us “#TheStory.”

“Zola” is an unconventional film based on a viral 148-tweet thread called “#TheStory” by @_zolarmoon on Twitter and a subsequent Rolling Stones article, both from 2015. It was directed by Janicza Bravo, who also directed the film “Lemon.” It was written by Bravo and Jeremy O. Harris, who is a playwright.

The film follows Aziah “Zola” King, a waitress and part-time dancer. After meeting another character named Stefani, she embarks on a road trip to strip dance with her friend of less than a day, along with Stefani’s boyfriend Derek and “roommate” X. But as #TheStory progresses, Zola realizes that nothing is right about what’s going on.

“Zola” immortalizes the popular internet story into the world of art. It has some slightly annoying editing tricks, but the wild plot and excellent acting more than make it worth watching.

The titular Zola is played by Taylour Paige, who performs excellently as the lead. She plays Zola as calm and collected, despite the terrifying circumstances. Opposite of her is Riley Keough as Stefani. She plays her somewhat aloof with a fine mixture of white trash, while staying subtly manipulative. They are both fantastic performances.

Nicholas Braun plays Derek. He works well as Stefani’s boyfriend, especially as a white trash companion. But he’s also self-conscious and insecure, constantly worrying and making empty threats against everyone. Finally, Colman Domingo as X plays the complete opposite of Derek, taking point and demanding everyone else to do what he says. He does an incredible job, specifically in what gets revealed throughout the movie.

All of the main performances are excellent, as they pull character and drama from the descriptions in the tweets and the article. An interesting note about the characters is that everyone’s name is slightly changed except for Zola’s.

The story is adapted from both the tweets and the article, with a few things altered between the two sources. It’s a fascinating story, as it doesn’t follow formal screenplay structures. It works by focusing on the characters and how they interact with the plot over time, with the audience learning about them and the situation as it develops with Zola. It acts almost like someone finally writing down an oral retelling of a story, except it was already written down.

It also works as a showcase of real horror within the world. As the story progresses, there are certain details that begin to unravel as it shows the seedy underbelly of the world of sex work, specifically in terms of sex trafficking. These are real and terrifying realities that the film presents, and it does a good job at keeping those elements pretty serious.

The cinematography helps paint the story. There are several interesting angles utilized, some of which are exclusively used during the pole dancing sequences. Generally, it’s well composed with some occasionally beautiful shots, while also detailing the grungy Florida setting.

The score is idyllic, with harps and dreamy string instruments. It carries a sense that the events in the film are in a dream state, like Zola can’t believe everything that is happening to her. Along with the score, there are some great song placements throughout the movie that fit specific scenes well.

For the most part, the editing and sound design is fine. This film utilizes different stylistic decisions to make it standout. Unfortunately, they mostly felt annoying, unnecessary and a little distracting. For example, the film uses Twitter sounds to indicate when the movie quotes one of the original tweets. There are also some screen overlays that replicate cell phone features that are so far between each other it feels disconnected. Overall, it doesn’t add much to the film, but it could be worse.

“Zola” is a unique film solely because of its origins. It does an excellent job at bringing a wild internet story to the big screen, especially with the incredible lead performances.

There are some annoyances, specifically in the editing and sound departments. But they don’t take away from the nature of the film. It works as a concise, funny and horrific portrayal of the dangers of sex work, with Zola as the level-headed lead.

If you haven’t read #TheStory or the article written about it, this movie works as a great adaptation of the original Twitter thread.