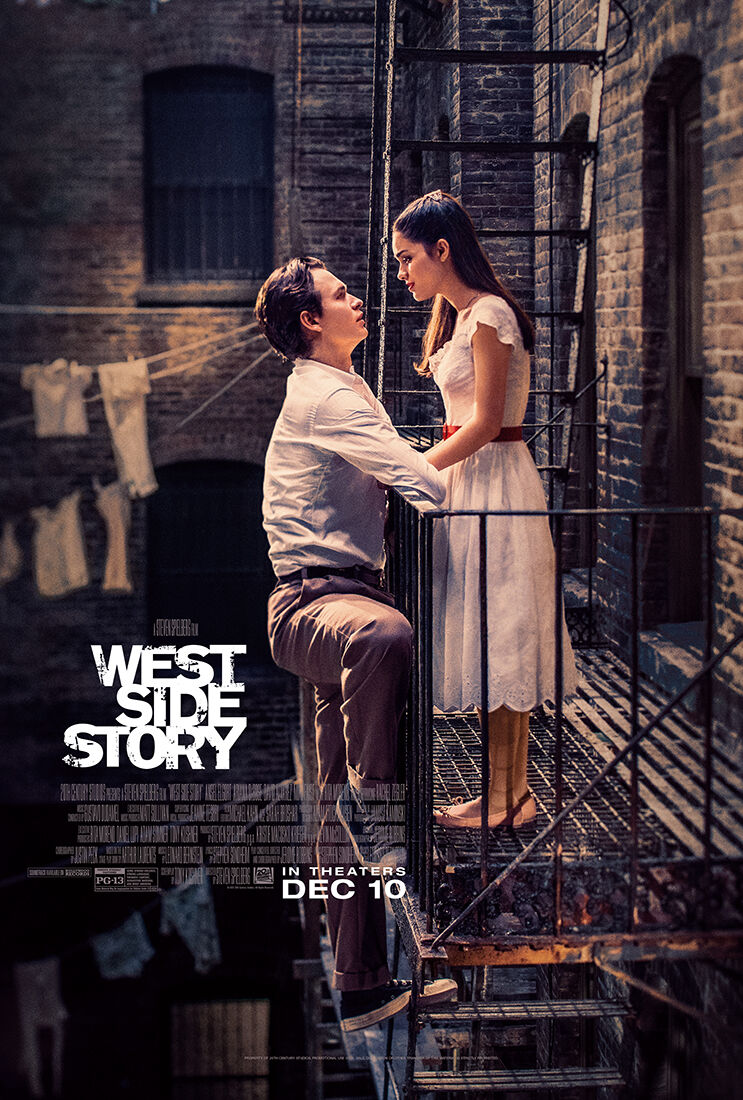 With his classic Spielberg charm, it’s a nice feeling to be whisked away for two and a half hours.

“West Side Story” is a remake of the original film based on the Broadway musical. It was directed by Steven Spielberg and written by Tony Kushner.

Set in 1957, the film follows Tony and Maria as they fall in love. However, Tony is part of the Jets, a white gang, while Maria is the sister of the Shark’s leader Bernardo, which is the Puerto Rican gang. Despite the rival gangs, Tony and Maria fight to find love and stop the fighting.

“West Side Story” is a wonderful modern update to the classic musical. Coupled with Spielberg’s direction, the film sweeps the audience off their feet to transport them into the “Romeo and Juliet” New York drama.

The film has a stacked list of actors, who all mostly perform well. The film’s leads include Ansel Elgort as Tony and Rachel Zegler as Maria. Zegler is the standout star of the film, as she captures the character and delivers a beautiful singing performance to go along with it. Elgort is fine for the most part, and there are times where they work well on screen together, but he is overshadowed by Zegler for most of the film. Despite the quality of his performance, it’s worth noting that after this film was shot in 2019, sexual assault allegations were made against Elgort.

As for the rest of the actors, they all do a phenomenal job even with their goofy New Yawk accents. A few key actors include Araina DeBose’s excellent Anita, David Alvarez as Bernardo, Mike Faist as Riff and the lovely return of Rita Moreno as Valentina in replacement of Doc. They have some over-the-top performances, but it works well given the context of the story. They’re melodramatic in just the right way.

The story of the musical and original film is matched pretty well, with a few differences between some of the context behind the musical numbers. Overall, it works extremely well, as it continues to capture the dramatic power that the original musical has.

Along with that, it’s poignant and pertinent themes of racial tension, immigration and the eviction of people to pave way for the incoming richer tenants. It weaves these themes using “Romeo and Juliet” as the backbone, but it’s interpretation of the story within the underlying civil unrest of the 1950s is still excellent.

It helps that the music, which has been oh so slightly rearranged based on Leonard Bernstein’s score, mixes the large emotions of the characters with the rough and tumble nature of the gangs. Clearly, Rachel Zegler steals the show in every song that she does, especially her rendition of “Tonight.” Everyone else has a great range of boyish and girlish pride with their gang ballads or songs about their current circumstances.

For example, this remake has a huge dance number for “America'' that bleeds out into the streets, filled with flittering dresses and stopped-up traffic. The choreography is intricate and purposeful, along with the other dance sequences in the film. It’s a boisterous number that captures everything that makes the musical special.

Speaking of dresses, the costume design is still spectacular, even to the color coordination between the gangs and their perfectly unkempt clothes. A lot of the dresses and looks are pretty much pulled from the original musical, but it still works due to their timelessness and brilliant fashion sense.

Although it is fairly classic in its portrayal, the film has some excellent and modern camera usages that really help this movie stand with its predecessor. There are some of the classic Spielberg Oners, which he effortlessly uses in several scenes to keep the camera movie without being distracting. There are several intense close-ups coupled with the harsh, stage-like lighting that casts large shadows along the actors’ faces. It works beautifully, especially when color becomes more prominent in several sequences.

Finally, the film is paced extremely well with the long runtime. It moves fluidly from set piece to dramatic scenes, and it’s over before you know it. It gives the film that final push to capture the audience’s attention and hold it there for the entire film, especially to its devastating conclusion.

“West Side Story” is a nice addition to the original film and Broadway musical. Its modern sensibilities enhance the film to bring it to new audiences without outright replacing the original.

This adaptation is sure to please fans while creating new ones in the process. It’s fun, melodramatic and heartbreaking all at once and in the best way possible. It continues to show the beauty and importance of this story over 60 years later.

The only truly good reason to replace the original film with this one is that it has actual Hispanic actors in the film instead of white actors playing Puerto Ricans. It’s unfortunate that Elgort is still attached to this film, but taking the film as it stands shows that it’s still an excellent musical.

This film has the chance to live on for a long time, hopefully without another remake. But in any case, this film is pretty magical. I almost guarantee that you’ll be fully engrossed into the film by the ending.