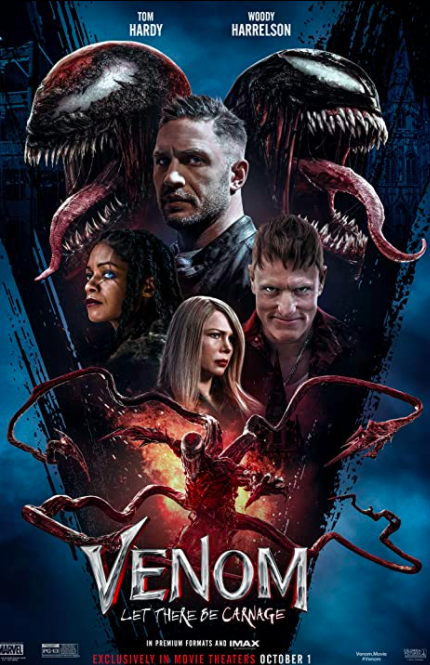 “Venom: Let there be Carnage” is like a roller coaster with no twists or turns.

The film hits all of the marks that a movie’s supposed to, but offers nothing particularly significant in terms of complexity. Though it has every excuse to be an unwatchable mess, the movie still delivers enough to warrant your time.

Sure, you shouldn’t expect a more cerebral narrative from a superhero film, but Venom brings so much to the narrative playground. There’s a plethora of possibilities for character development that were entirely neglected by the film’s plot. Instead, the film glosses over character development, demonstrates a subpar plot and embodies clichés present in many other cash-grab movies.

The most significant mistake this film makes is in regards to its pacing. The main characters are introduced very hastily in a whiplash-inducing introduction that implements a series of contrived flashback sequences. The introduction is weakened even more later in the film, as the events transpired are retold by other characters. This calls attention to the film’s dull storytelling. After we become familiar with the main cast, the entire movie feels like it’s suspended in a complete stasis until the climax.

There aren’t any particularly meaningful events that occur before the final showdown, and the movie really just feels like it's biding its time until then. Characters stall for no reason, action sequences with no consequences commence and there certainly isn’t any meaningful character development.

In fact, Venom and Eddie essentially repeat the lessons they learned in the previous installment, making this movie even more of a drag. They are the most entertaining aspect of this film, however.

The pair has some of the best dialogue in the movie, which isn’t saying much, but their chemistry is the strongest aspect of the narrative. Venom has great commentary for a majority of Eddie’s awkward conversations with other characters. The pair’s petty bickering made the slower parts much easier to sit through.

Strangely enough, for seemingly no reason, Venom and Eddie split only because the script needs them to. The reason for their split feels completely unwarranted and comes as a complete surprise.

This split spurs the beginning of even more contrived subplots that have no overarching purpose related to the film’s conclusion. This could have been an excellent opportunity to develop Kasady’s character even further, creating some suspenseful scenes where Eddie has to confront the super-powered maniac without the protection of his trusty symbiote.

Kasady suffers from a very similar issue. He’s meant to be a fairly one-dimensional bloodthirsty maniac that wants nothing more than to slaughter innocent people. And in its own way, that’s a compelling concept.

Making such a dangerous person an unstoppable alien creature is a chilling concept that can warrant some great conflict with other characters. This, however, misses the mark.

Instead, the film gives Kasady a discernible reason for his killing sprees, implementing another super-powered character as a love interest. Not only does this make little sense, the character’s presence also just piles on even more uninteresting and unnecessary plot lines.

Woody Harrelson’s performance as Cletus Kasady is hard to watch, delivering an obnoxious interpretation of a standard “crazy” person that makes the character more annoying than threatening. Carnage himself is a disappointment. The newborn symbiote immediately conveys his burning desire to kill Venom, without any emphasis as to why. This grudge is never really explained, making the final confrontation quite underwhelming.

“Venom: Let there be Carnage” is not a great film by any means, but it’s not entirely flawed either. It has decent effects, solid humor and enough charm to at least keep you entertained for its hour and a half runtime.

Though there is a fair amount of disappointment and many missed opportunities, anyone can experience this film and find something to appreciate. Beyond that, it’s certainly more entertaining than its predecessor.

Personally, I think Tom Hardy’s interpretation of the character, as dull as it is, has a bright future, and I almost wonder what the series might look like with a more experienced director.