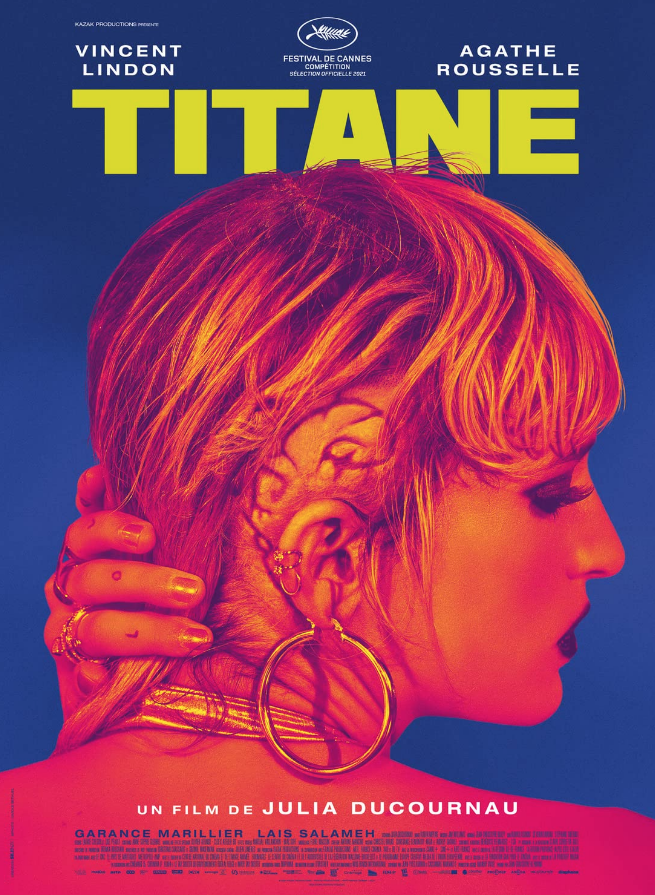 One of the year’s best films also happens to be the single hardest film to recommend this year. There will also never be another film that forces the audience to hold their breath during the “Macarena.”

“Titane” is the winner of the Palme d’Or at the 2021 Cannes Film Festival. Julia Ducournau wrote and directed the French body horror film, following her disturbing 2016 debut film “Raw.”

The film follows Alexia, a dancer, murderer and literal autophile with a titanium plate in her head, as she tries to outrun the police. To do so, she disguises herself as a firefighter’s missing son. But a sexual encounter with a car — yes, you read that right — threatens to reveal her secrets.

“Titane” is a deeply unsettling case of provocateur filmmaking. It’s one of the hardest to watch and most confusing films recently released. It also happens to be one of the best films of the year.

Agathe Rousselle plays Alexia, and she delivers a chilling and pained performance. She is constantly hurting throughout the film in ways that appear to be both physical and internal. But there’s also a hidden soft side to her portrayal of the character that only rears its head occasionally. It’s an incredible performance, especially in how she begins to express herself with other characters over the course of the film.

The other main lead is Vincent Lindon as the fire captain Vincent. He delivers a similarly anguished performance, constantly on the brink of losing it all. His moments of compassion and emotional turmoil are beautiful, especially paired alongside Rousselle’s tragic deception and their growing bond. The way both their characters develop through their performances is amazing.

Along with that, the story of the film is impossible to describe without either spoiling it or sounding like utter nonsense. However, the plot is unique and intriguing, constantly keeping the viewer engaged with whatever the next development might be. Even with the most mundane sounding ideas, the film crafts the story into something unlike anything I’ve seen put to screen in recent years.

With that in mind, this film is one of the strangest and most unnerving movies out right now. There were several moments that induced fear and discomfort, more so than any horror film made in the last five years or so. The opening act is specifically seat squirming, with moments that linger and weigh on the viewer.

That leads into two ideas presented within the film. The first is Alexia and her actions. It makes it expressly clear that her actions are terrible, with seemingly no reason or motive behind them. There’s a deep resentment sewn into her, something that is linked to the opening scene.

However, the film progresses and shows two sides to her character, mainly her soft side as she develops a connection with Vincent. This leads to the ultimate atonement for her actions, as well as an element of forgiveness. But that is directly tied to the viewer’s experience with the film, and it is impossible to try and break that down within a short paragraph.

That’s why I’m continuing it here for just a short while more. Without spoiling anything, the last act firmly establishes several themes built up throughout the story that could take an entire article to dissect.

For the sake of brevity, the film presents themes of atonement and repercussions for Alexia’s sins in a way, but it also offers up an idea of rebirth, emerging through the pain and suffering to start anew by accounting for changes in behavior and character. It’s strangely beautiful in a messed-up sort of way.

As to the second idea — you thought I forgot — the film does everything in its power to enforce a pressure onto the viewer. This is most prominent within the score by Jim Williams. It features a heavy and pulsating bass that drones over scenes, creating a dissociative and unbreathable atmosphere while you helplessly watch the events unfurl on-screen. It’s incredible, along with the layers of sound that are mixed and altered to invoke different feelings as scenes progress.

With the score, the songs chosen to play throughout the film are perfectly placed. They establish the mood, tone and setting of certain scenes in such a way that it is improbable to imagine that there could be a different song used in the movie. From the opening scene to Vincent dancing after dinner, every song has purpose, even if it is just to fit the mood of a particular scene.

Ruben Impens shot the film beautifully, with specific camera movements and angles that convey power, anguish and despair. Everything is placed in just the right way and at just the right spot to convey every single idea necessary for this film.

Because of the nature of the story, the cinematography is integral to the film, and it succeeds at crafting a wholly unique visual experience matched with the sparse dialogue. It doesn’t do the same claustrophobic closeups like “Uncut Gems,” but it doesn’t need to in order for the audience to wait with bated breath.

Finally, the editing by Jean-Christophe Bouzy is mostly unnoticeable, as it sets up a consistent rhythm that matches the action, sound and visuals of the film. It was neither distracting nor flashy, but it’s better because of that. The only times it was noticeable was out of admiration.

“Titane” is incredible, offering a cinematic experience unlike anything else this year. It will move you, mostly in a horrific fashion as you readjust within your seat to fight off the tingling feeling brought upon by great body horror. But it will place itself within the memory of audiences for a long time to come.

The impossible task with this film is recommending it to people. It is nearly a guarantee that people will hate this movie, for multiple reasons. At times, even though a film might win the most prestigious award that it could possibly win, this may not be enough to make people appreciate it.

But that’s also the nature of provocative filmmaking. It’s not for everyone, and that’s okay.

With that in mind, you might see this movie and come out of it with hatred deeply woven into the experience. You might regret the money you just spent to go out of your way to see it. You might not even understand why it’s receiving all the praise it is getting.

To that, I offer a singular point.

This film is something that could have only existed as such: a film. There is no conceivable way to make this story work in any other medium. Not in a novel, not in an album, not even in a podcast. Maybe as a TV show, but only if it was given the proper budget and time.

Julia Ducournau uses every single asset within film as a filmmaker to create this work of art. It crafts something that only the audio and visual format of storytelling could have birthed.

To that, I say that this is representative of the power of cinema.

Even if you hate it, this film will be unlike any other experience within a theater this year.