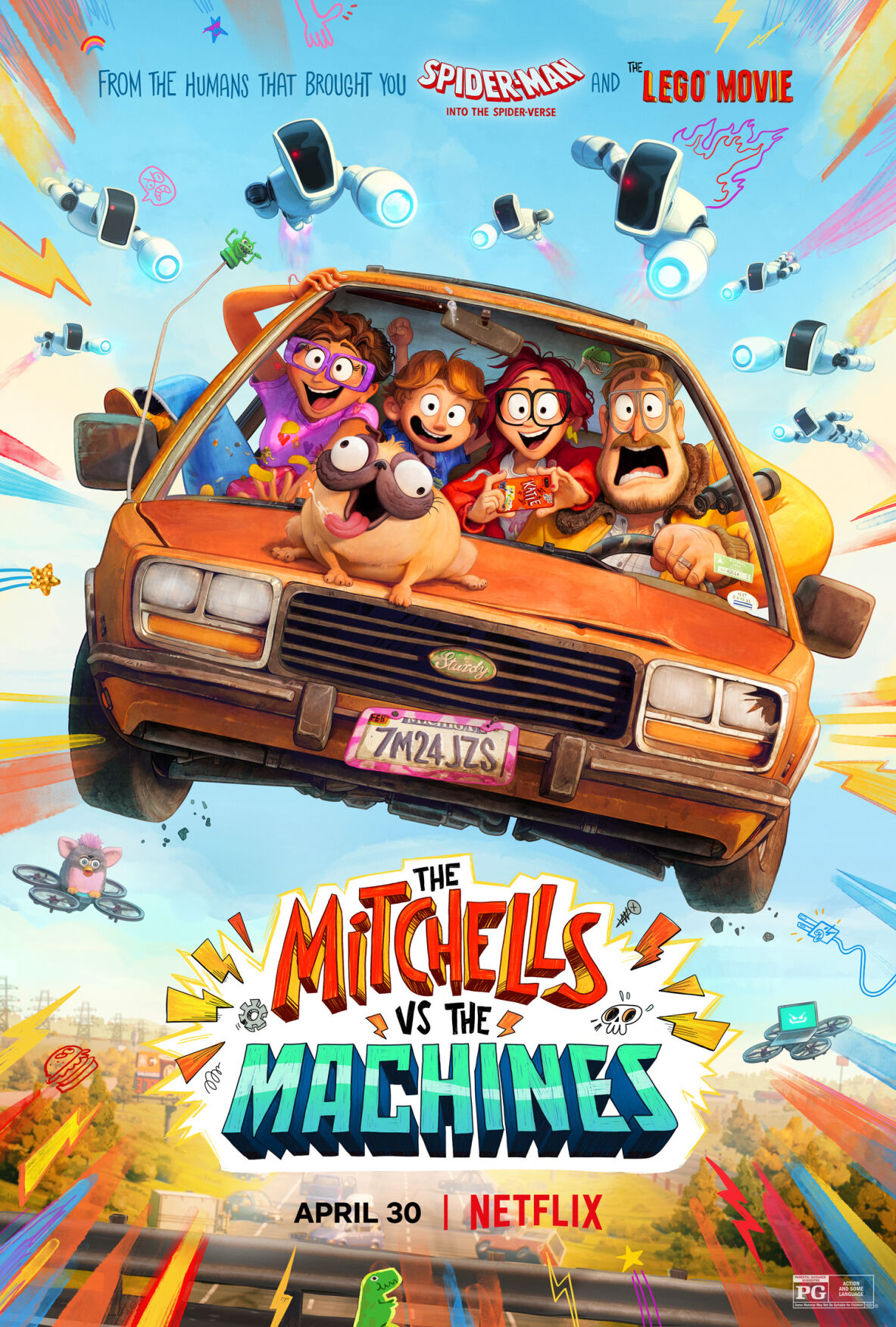 Family can be weird and difficult, but having to deal with an apocalypse probably doesn’t help.

This is the core of “The Mitchells vs. The Machines.” The animated road trip comes from writer and directors Michael Rianda and Jeff Rowe for Sony Pictures Animation. The film is also produced by Phil Lord and Christopher Miller, who have worked on several movies including “The Lego Movie,” “Cloudy with a Chance of Meatballs” and “Spider-Man: Into the Spider-Verse.”

The film was released on Netflix for free to subscribers.

The film follows Katie Mitchell, a quirky filmmaker that no one understands. After getting accepted into a California film school, Katie is set to leave everything behind. However, her outdoorsy dad decides that the best course of action is to go on one last road trip before sending her off to college. Oh, and robots from a tech company have gone rouge and caused a robot apocalypse by capturing every human on the planet.

“The Mitchells vs. The Machines” is an excellent animated film that utilizes its medium creatively to tell a charming story about family. It is an incredibly fun experience, and it would be hard not to find enjoyment in this film.

The main voice cast do a great job at making the Mitchells distinct while still being a family.

The film also features a slew of actors that compliment the movie excellently. These include Eric Andre, Olivia Colman and Fred Armisen to name a few.

The voice cast do a stellar job at giving this film life and character. From the dysfunctional family that cares for one another to malfunctioning robots dealing with emotional issues, the voice cast does a superb job.

Along with the cast, the animation is excellent, especially when it lets loose. The characters are all designed well, which helps in making everyone unique. The art style also has a blended cell-shaded and sketch look that works great, especially with the notebook paper drawings that pop-up throughout the film (which is called Katie Vision).

Everything flows fluidly and there are so many fun and creative choices taken in the presentation. It reminds me most of films like “Scott Pilgrim vs. The World” and Spider-Man: Into the Spider-Verse.” It utilizes animation to insert fun additions that it couldn’t do otherwise. It creates a unique, fun and creative film full of style.

Finally, the animation looks stunning at times. There are so many colors, landscapes and tones pushed into this film that creates a fantastic visual experience.

The film does a great job with its story. It has several elements that are basic on paper (road trip, apocalypse, evil technology), but it blends all of them together quite well. It also has some excellent story beats set up that payoff well. The characters are all well written with their own individual personalities that works in tandem with the other characters in the film.

On top of that, the film is surprisingly quite emotional. It focuses primarily on Katie and her dad Rick and how they don’t “get” each other. As the film progresses, it builds that relationship up in interesting and heart-warming ways. For a film filled with memes and creativity, they convey a fantastic emotional arc about family.

Speaking of memes, this film has quite a lot of humor. It’s a little all over the place, including slapstick, witty jokes and old memes. But it is very funny, producing several good laughs during its runtime. It also tells a lot of jokes visual, which the animation helps in making them land.

Unfortunately, the humor creates two issues in the film.

The first issue is that it uses old memes (like 2012 memes). These can be a little cringey, especially in how much the film leans into them at times. However, the film is also quite ironic, so it doesn’t feel outdated. Instead, the film feels like it is at least a little self-aware. It also helps that those memes have come back in a post-irony fashion.

The second issue is that the film sometimes undercuts some emotional scenes. It can be annoying, especially during the climax of the film.

The only other slight issue is that the editing can be a little choppy at times, but it is deliberately so. Most of the time, they will quickly cut to something completely different for a joke. However, it lands most of the time, so it isn’t really a problem.

But these are the only issues with the film. Albeit annoying, they don’t ruin the film or make it any less enjoyable.

“The Mitchells vs. The Machines” is another excellent film from Sony Pictures Animation. It is a fun joyride filled with lovable characters, a great story, fantastic animation and an ironic sense of humor that lands a majority of the time. The film oozes energy, style and heart.

This film has something for everyone to enjoy. It’s a film about identity, family and being a weirdo and owning it. It’s a genuinely charming and heartfelt film at its core.

Also, they got a dog to play a dog. How can you not love it?