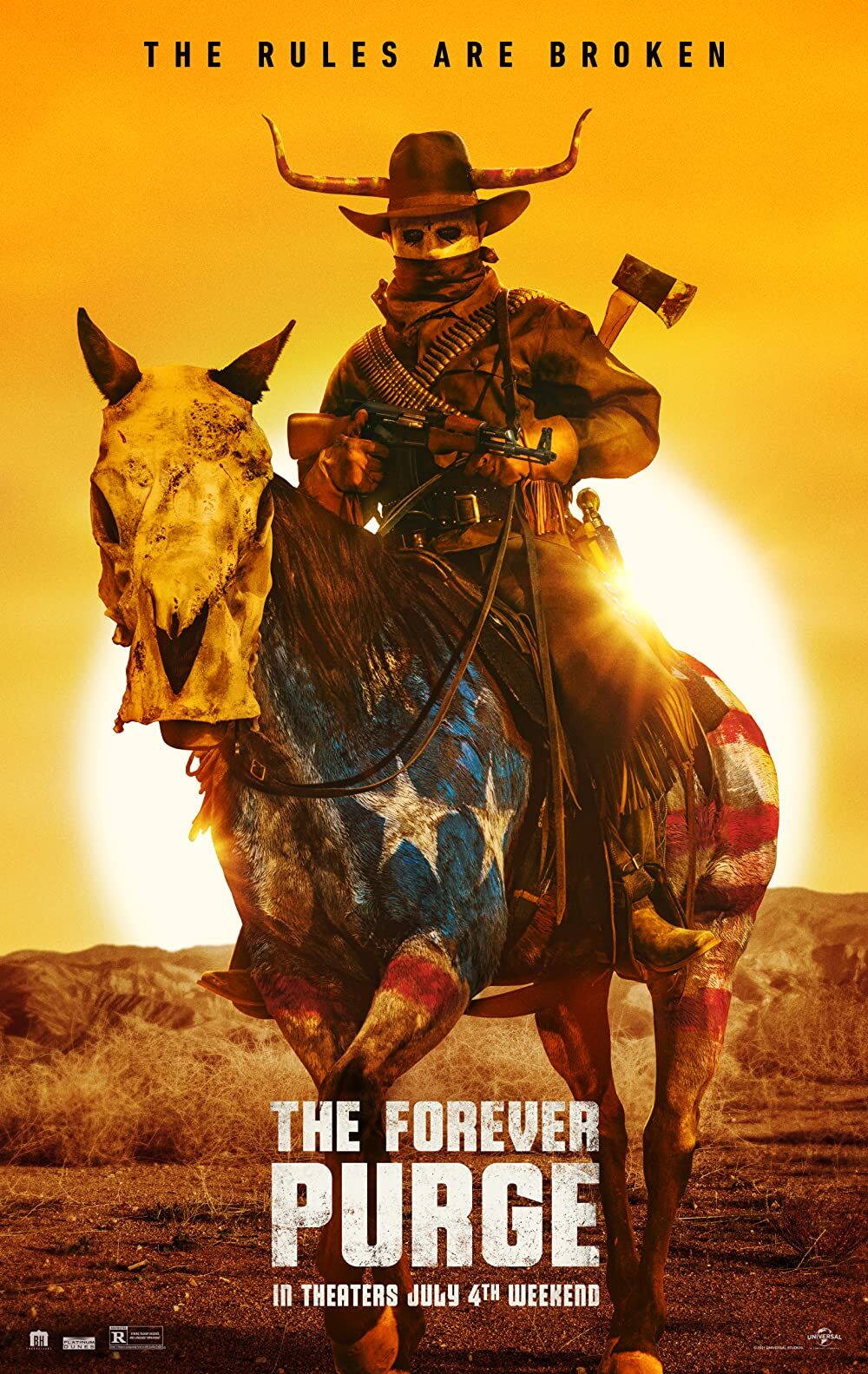 Finally, a film that asks the tough question that’s been on everyone’s mind: what if the Purge, but longer?

“The Forever Purge” is the most recent addition to “The Purge” franchise, with this being the fifth film in the series. It was directed by Everardo Valerio Gout, who worked on the “Snowpiercer” TV adaptation. It was written by James DeMonaco, the creator of the franchise.

The movie follows Juan and Adela, two immigrants from Mexico trying to live a new life in Texas. Juan works as a rancher for a rich white family, who show various degrees of respect towards him. But everything goes south when people continue to celebrate the Purge, an annual holiday where crime is legal that was previously dismantled. Juan and Adela must now team up with the ranchers to survive the Forever Purge and find safety.

“The Forever Purge” continues the franchises’ over the top premise with some surprisingly competent social commentary. It’s not the most well executed film, but it does what it sets out to do well enough to get by.

For the most part, the actors do a good job in the film. No one is particularly great, however no one delivers a terrible performance. The films stars Ana de la Reguera as Adela and Tenoch Huerta as Juan. As the primary leads, they both do a good job at carrying the movie. They are joined by Josh Lucas, Cassidy Freeman and Leven Rambin as the Tucker family of ranchers, as well as Alejandro Edda as T.T., Juan’s friend and coworker.

Reguera and Huerta both give the best performances in the movie, as they are able to lead the other characters well while letting pockets of character shine through. Everyone else is fine, but not memorable.

This boils down to a problem with the writing. The characters are given barely enough traits and growth to become fleshed out characters, but it isn’t enough for audiences to latch on to them. It works better when the main protagonist is more of a blank slate, like in the second movie, so he can act more of a placebo against all the crazy Purge antics. On the plus side, these are probably some of the better written characters in the series.

Speaking of writing, this film continues with the social commentary aspects of the franchise, which became more apparent from the third movie on. In this film, topics of immigration, white supremacy, insurrection and racism are discussed to various degrees of depth. For the most part, this film does a surprisingly decent job at bringing up these topics and dissecting them. It’s not the most in-depth and it’s extremely on the nose, but it’s at least trying to offer more insightful observations than most horror films.

For example, the immigration aspect of the commentary focuses on how Adela and Juan live their lives in America as well as how they are treated, specifically by their coworkers and Purgers. Out of all of the topics, the writing feels the most nuanced and understanding in relation to the topic of immigration.

However, the rest of the writing doesn’t reach a similar level of intrigue. Instead, it’s mostly surface level as the characters need to get from A to B while dodging the Purge. It’s serviceable at best.

The technical parts of the film are also just as serviceable as the story. The worst offender is the cinematography. The lighting is too dark, the camera is too shaky and the action is nonsensical. Along with that, the camera quality falls at different points, specifically when it cuts to a camera attached to a car. It seems like they used a GoPro for those scenes; it’s painfully noticeable when it cuts to one of them. There was one continuous shot midway through the movie that was pretty impressive, but that’s the only good part of the cinematography.

The editing is better, at least in terms of it being not as noticeably bad as the cinematography. For the most part, it works well. There were only a couple times that felt distracting, mostly during some of the action sequences; it cut too many times to follow.

Finally, the score and sound design are okay, but nothing spectacular. The score is passable, but soon forgotten whenever it wasn’t playing. The sound design is inconsistent, where it was sometimes punchy as it matched the gunfire on screen and other times weak as it didn’t leave any impact.

“The Forever Purge” is a movie that fits in line with the rest of the films in “The Purge” franchise. It contains a stupid plot, thin characters and inconsistent production. But it also continues to have decent social commentary and an inherent enjoyableness to it.

“The Purge” movies are an interesting bunch. They’ve never been great, but a few stick out as being fairly competent as they accomplish what they want to do. “The Forever Purge” has a few stand out aspects to it, but it doesn’t do enough to become the franchise’s best.

Unless the actual Purge was happening, you could have a worse time.