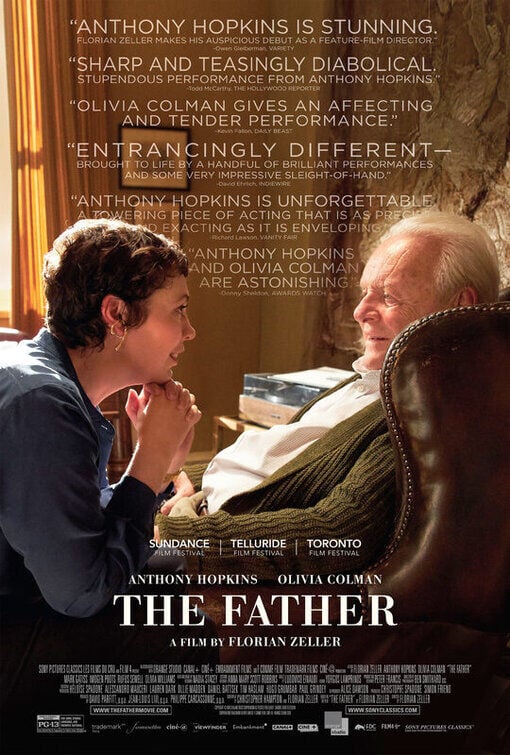 An unfortunate reality of growing old is the possibility of your brain functions declining. It can be scary for everyone involved.

This is the basis for the film “The Father.” It is directed by Florian Zeller and written by Christopher Hampton and Florian Zeller. It is based on a play of the same name by Zeller. It is playing in theaters and is available to rent on streaming platforms.

The film follows the aging and mentally declining Anthony as his daughter Anne tries to care for him. As the film progresses, Anthony suffers more and more from dementia and soon conflates people, locations and events into different realities.

“The Father” is an interesting and complex view of dementia and how it affects people. It does a great job at placing the audience into the shoes of someone with this mental disorder.

Anthony Hopkins leads the film as Anthony. He delivers an incredible performance, especially in how he declines throughout the film. It’s a heart wrenching performance as he shows how frightening dementia can be while becoming increasingly unaware of what is going on. Anthony Hopkins does a fantastic job, and it will most likely stand alongside some of his best roles.

Olivia Colman plays Anthony’s daughter Anne. She gives an equally great performance as the supportive Anne trying to care for Anthony. Specifically, there are several small moments where Colman shows how close Anne is to breaking down, yet still holds everything together. It’s a great supporting performance.

The structure of the film is quite incredible. The film is primarily told through Anthony’s perspective. Everything seems to be a jumbled mess, with characters having the wrong names and events playing out of order. But, it’s deliberately done so as to convey the effects of dementia to the audience.

This is reinforced by the editing. The film is edited so that scenes will play out and seamlessly cut into different scenes, acting as if it’s a continuation of the previous scene. There is also a good understanding of how long the film needs to stay on specific shots, so it’s not cutting too much or too fast.

The film mostly takes place in one location, which is Anthony and Anne’s apartment. The decision to set the story in one central location benefits the movie greatly. It drives home the ideas of recognizability and how everything can change without Anthony noticing. This central location blends with the editing and structure fluidly and brilliantly.

Along with this, the other aspects of the writing are great. There are several individual lines of dialogue that become significant as the film plays out, building up until the end. The film also smartly alludes to events and characters without having to spell it out to the audience. With the structure, the film is excellently written.

The cinematography of the film is simple and great. It doesn’t attempt to do anything flashy or over the top. It is shot with good lighting and good camera placement. It’s also shot mostly at eye level, which helps the audience get associated with the characters and their apartment.

Finally, the music in the film is used quite well. There are several classical pieces of music throughout the film, which help in fleshing out the characters. There is also a score by Ludovico Einaudi — who also scored “Nomadland” — that is excellent the few times it is used.

“The Father” is a disorienting film in a good way. It conveys to the audience the effects of mental decline through the perspective of someone with dementia. It accomplishes this through excellent writing, editing and performances.

It’s hard to describe, but the film almost acts like a psychological thriller, as it shows the confusion and fright that Anthony experiences as he loses his cognitive abilities. It becomes increasingly tense and ultimately saddening as you understand what is afflicting Anthony while he can’t comprehend it.

Overall, “The Father” is a great film that is presented in a unique fashion. It’s confusing, but that’s the entire point of the film.