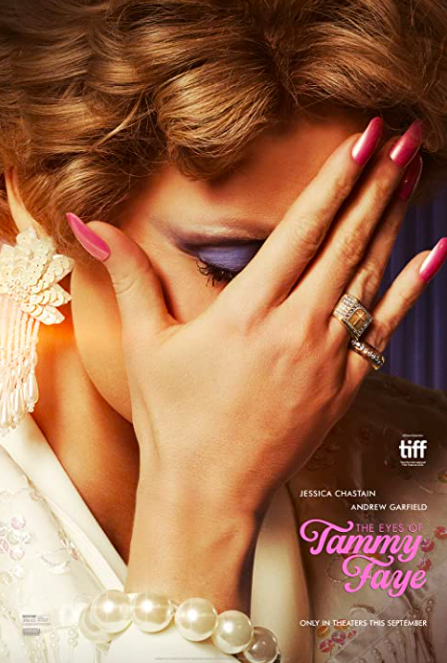 Hallelujah, glory be to Tammy Faye!

“The Eyes of Tammy Faye” is a biographical film based on the 2000 documentary of the same name. This film was directed by Michael Showalter, known for “The Big Sick” and “The Lovebirds,” and written by Abe Sylvia.

The film follows Tammy Faye Bakker, the wife of one of the biggest televangelists, Jim Bakker. It chronicles her upbringing until she meets Jim and then shows us how they built a megalithic, evangelical empire using their charisma and the power of television.

“The Eyes of Tammy Faye” doesn’t do enough to show the full extent of the Bakker couple's power, mostly because of the singular focus of the narrative. But the two powerhouse leads sell the movie by themselves.

The film stars Jessica Chastain as Tammy Faye and Andrew Garfield as Jim Bakker. Both of them deliver outstanding performances, completely overshadowing any problems that the movie has. They both nail the midwestern personalities, as well as the warm and welcoming preacher tones of these people. Best of all, their charisma and talent let them melt into their roles of master manipulators as the Bakkers. These were some of the best performances of the year.

The film also stars Cherry Jones, Vincent D’Onofrio, Fredric Lehne and Louis Cancelmi, as well as several more. They all give great performances, and the few times that they are on screen, they leave an impression. But they aren’t in the movie enough to leave a lasting impact, especially on the story.

Speaking of story, the plot of the film is great, showcasing the rise and fall of Tammy Faye. However, there are two main issues with the overall story and structure of the film.

The first is that the film focuses mostly on Tammy Faye, which works in showing the world through her perspective, as well as revealing information to her along with the audience. However, the film glosses over several details and doesn’t fully convey the extent of the Bakker’s influence and power — they built an entire waterpark, but the film barely touches on that. It’s not the worst thing in the world, but it was hard to grasp different aspects of their lives because of this singular focus.

The other major issue is pacing. The film speeds through certain areas of Tammy’s life without diving deeper into them. At the same time, the film slows down during different segments, allowing the audience to grasp the situations at hand. If the film had figured out a better way to balance some of these details, it might not feel as disjointed at times.

That being said, the film does a great job at portraying Tammy Faye and the kind of person she was. It consistently shows Tammy as someone who did care for people while also facing her own demons, through depictions of her singing, her addictions, her relationship with her mother and her advocacy of understanding towards the LGBTQ+ community.

At the same time, it also shows her complacency in her husband's actions and the decades upon decades of fraud and money laundering that they committed. She talks about God’s blessings and caring for others while lounging in her luxurious house on the waterfront. That being said, the film does a great job at showing the ramifications of her actions, both good and bad, after their fall from Heaven.

That’s one of the highlights of the film, Tammy’s descent from the heights of televangelism, which is strongly reinforced by Chastain’s performance. It details Tammy’s love for Christ and the good things that she did, even during periods of lying and manipulating. Perhaps the film is manipulating the audience into thinking Tammy was a good person. If that’s the case, it worked.

Another interesting aspect of the film is the way it was shot, specifically in certain sequences. There were moments where the film used older TV cameras — or at least their picture quality — to recreate moments from their programming. It was a nice addition because it showed what their shows were actually like. Additionally, there was some interesting usage of depth of field that helped put the audience in Tammy’s eyes, specifically when she nearly overdoses.

Outside of these moments, the rest of the cinematography isn’t much to write about. The film is statically presented, without many camera flourishes or techniques. It’s pretty standard shot-reverse shot for most of it, which is okay but doesn’t help the movie stand out amongst other biographical films.

However, one aspect of the film that does help it standout is its title cards, which are used to denote the year, location or designations of people. This is done in the stylings of TV eras, recreating the fonts and colors that would’ve been used during the time period of the film. It’s a nice touch that, along with the TV camera usage, nails the stylings of the film’s time.

Finally, the music used in the film is great, specifically the recreation of some of Tammy’s songs. They are used well in the film, mostly during montages. They make up for the lackluster score that can occasionally be heard throughout the film.

“The Eyes of Tammy Faye'' is a decent biographical film that is elevated by the show-stopping performances of its two leads. Even when the rest of the movie fumbles, Jessica Chastain and Andrew Garfield smooth talk their way to the finish line.

This film is weirdly enjoyable, as the insane magnitude of power and influence that the Bakker couple had is astounding. It’s just a shame that the movie never properly dives into those aspects.

Instead, the movie delivers on portraying Tammy Faye as a flawed individual who still wanted to help people. Chastain’s portrayal of Tammy alone is worth seeing, and she is an easy contender when awards season rolls around.

It speaks volumes that Jessica Chastain and Andrew Garfield are able to carry this film from start to finish. They truly captured the essence of being a televangelist.