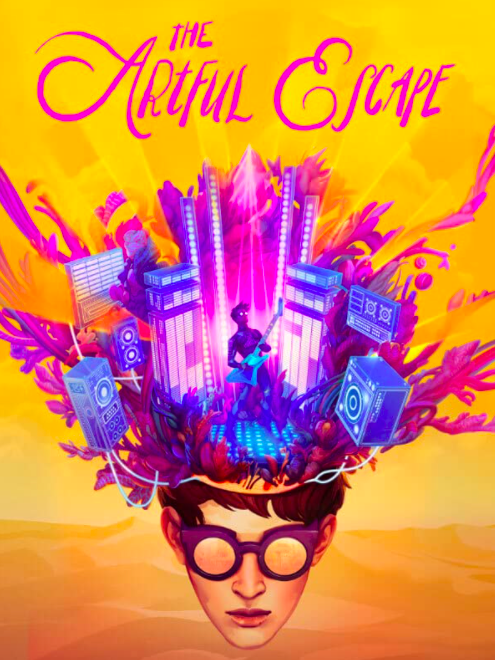 Sometimes a roaring trip through the infinite cosmos is all you need to realize that the life you’re leading isn’t what you want.

This is the central story of The Artful Escape, a new video game from publishers Annapurna Interactive. Available on PC and the Xbox series of consoles, it was directed by Johnny Galvatron from The Galvatrons and his development studio Beethoven & Dinosaur.

The game follows Francis Vendetti, a young talent living under the shadow of his uncle, Johnson Vendetti. Destined to be a folk legend, Francis has a crisis, realizing that the folk lifestyle might not be for him. After a strange encounter with the mysterious Violleta, Francis is transported to the stars to play alongside the legendary Lightman as he finds his sound: sci-fi rock and roll.

The Artful Escape is true to its name, creating a visually incredible tale about discovery. Albeit linear, the game does an excellent job in crafting a narrative with moments of brilliance, even if there’s not much reason to revisit the game later outside of the story and visuals.

The game’s story is told in a linear fashion, progressing one musical set piece at a time. It tells a complete story from beginning to end, detailing the journey that Francis goes on to find himself. It’s interspersed with moments of self-reflection and deep conversations with the alien characters he meets along the way.

The writing does an excellent job at building characters and giving them personalities. It’s obvious in its messages, but it helps make the game’s themes clear and concise. Generally, it does well by diving into Francis’ insecurities and how everyone else perceives him without feeling pretentious.

Along with him, Violetta is written in a sarcastic, yet almost equally insecure, manner. The game succeeds at giving her a full narrative arc that builds right alongside Francis. By the end of the game, both characters reach a satisfying conclusion, culminating into a completion for their respective arcs.

This is helped by the voice acting, which breathes variety and life into these characters. The main actors include Michael Johnston as Francis, Caroline Kinley as Violetta and Carl Weathers as Lightman, along with additional roles from Mark Strong, Lena Headey and Jason Schwartzman.

The main three fill the shoes of their characters incredibly well, with Johnston nailing the voice of the insecure teenage boy and Kinley as the sarcastic and angsty teenage girl. Weathers fits the crazy guitar mentor character trope, filling each line delivery with energy and stardom.

The background characters and supporting roles do an excellent job too, especially by making no two characters sound the same. It gives the game an otherworldly feel by providing distinct voices throughout the experience.

Coinciding with the narrative and acting, the visuals and graphics of the game are spectacular, providing a unique look that sets the game apart. The designs of the characters, aliens and worlds throughout the game consistently impressed, with ever-changing landscapes that don’t repeat. A favorite design comes from a floating head made up of hands, flora and facial features that sets Francis’ journey off after he’s thrown into the cosmos.

The game becomes a psychedelic experience, with art and designs that come straight off of an old vinyl record, with Francis even making those same comparisons. It seems transcendent, like something you’ve passed before in a record shop but could never imagine coming up with yourself. It’s a completely different thing to experience yourself, as the levels and story create a pretty far out playthrough.

It is worth noting that the animations of the characters do get a little distracting at times. During cutscenes, they will repeat the same motions over and over again. It’s not a big issue, but something that was noticed, especially after a long period of time.

Outside of that, the only part of the game that feels a little lackluster is the gameplay. For the most part, the game is split into two gameplay styles: 2D platforming and rhythm sections. The platforming is fine, mostly consisting of holding left or right and jumping at the right time. There isn’t much to do and they only last a few minutes.

The rhythm sections provide a nice break from the platforming, even if it’s fairly basic. Ultimately, it amounts to a Simon Says type of pattern recognition, but it helps that the performance and music accompanying it is great.

That being said, there are two aspects that make up for the competent, but basic, gameplay. The first is the interactivity with the environment. While running around, you can hold a button to wail on your guitar. Doing so lets the environment react to the music, which creates some stunning visuals and connects the game more to the player.

The other aspect is the music, which has a nice arrangement of spacey rock and roll along with some heartfelt folk tracks (mostly in the beginning of the game). It helps the rhythm sections out tremendously, as it feels more like the player is putting on a grand laser music show.

Overall, the music is what sells the game, as it coexists with the visuals, story and gameplay. The music changes the game, making the entire experience feel cinematic, grand and purposeful. It’s definitely worth listening to outside of the game, especially as it nails the ‘70s glam and space rock albums that it’s inspired by.

The Artful Escape is a science fiction rock and roll experience that weaves the player through an excellent story, galactic visuals and transcendent music. Even though the gameplay doesn’t offer much to draw the player back, everything else will have staying power within the player’s mind.

There were two thoughts running around when starting this game. The first was the fear that this game would be like a pretentious indie album, one that has all these “complex” lyrics that totally mean something, you just have to listen closer. The other was the worry that this game would just be a “hold right to win” kind of game with no further substance.

It’s with joy to report that neither of those thoughts took hold in this game. Although the messaging is crystal clear, it’s better than being cryptic before realizing that nothing of substance can be found within the music or writing. And the gameplay, as basic as it can be, at least has variety to it, not being afraid to change it up every now and then.

In one playthrough, you will experience everything that this game has to offer. The gameplay doesn’t have enough going on to warrant repeat playthroughs, but the story has potential to draw the player back again and again.

At the end of the day, The Artful Escape provides everything that the name implies. It’s an almost psychedelic journey into the vast infinite of space, allowing both Francis and the player to discover themselves through the power of music.

It’s a truly far out experience.

Game reviewed on an Xbox One. Review code provided by Annapurna Interactive.