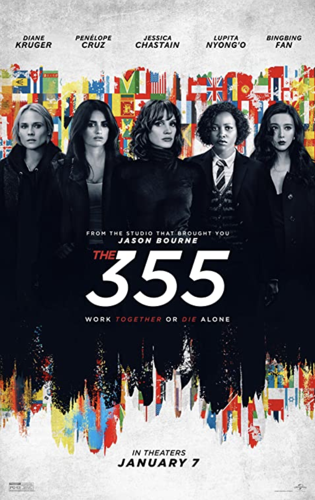 Unfortunately, this new spy film meant to pave its own path is one of the least exciting movies to be released in a while.

“The 355” is a female led spy thriller by director Simon Kinberg, who previously directed the X-Men film “Dark Phoenix.” It was written by Kinberg and Theresa Rebeck.

The film follows CIA agent Mason “Mace” Brown as she and her partner are tasked with obtaining a hard drive that has the ability to hack into any device. But after the operation goes wrong, Mace must go out on her own to complete the mission, all while placing her trust in a new team with her friend and MI6 agent Khadijah, psychologist for Columbia’s DNI Graciela and Germany’s BND agent Marie.

“The 355” is a failed attempt at creating a new and exciting spy thriller to compete with the male dominated franchises. It stumbles and bores its way to the finish line, all while trying to halfheartedly topple the patriarchy in the process.

The film has a great set of actresses for the lead roles. It stars Jessica Chastain, Lupita Nyong’o, Penélope Cruz, Diane Kruger and Fan Bingbing. Although all great actresses, the few shining moments that they’re given here are fleeting. They’re clearly trying to give good performances for this film, but their characters are so underdeveloped and one-note that there’s nothing to really grasp on to.

It’s also plain to see that they’re all trying to act well in this movie when placed next to Sebastian Stan, who delivers the worst performance in the movie. Every scene he’s in shows how phoned in his performance is, and he progressively appears to be losing interest in the film as it develops. It’s kind of funny how bad his acting is in this film.

Disregarding Stan’s performance, one of the main problems with these characters and the film as a whole is that it is severely underwritten. There is not enough character or story to fill out this film, which leaves it empty and lifeless. It just drags on and on as it tries to find new reasons to keep the movie going with characters who have little to no chemistry with each other.

It doesn’t help that the pacing, and subsequently the editing, is abysmal. Even during action sequences, the film comes to a halt so many times that it takes forever to get anywhere. It makes the movie seem longer than it is while the audience checks their phones for the umpteenth time just to see how long it’s been since they last checked it.

Speaking of the action, the “exciting” sequences strewn throughout the runtime are rough. The shaky camera mixed with the off tempo editing makes for dull gunfights and lame hand to hand combat. They aren’t incoherent, but there is nothing stimulating about their existence within the movie. It doesn’t help that the cinematography outside of the action is shaky, boring and basic as well with poor lighting just to give it the cherry on top.

If that wasn’t bad enough, the score is every basic globetrotting piece of music in these kinds of spy films. It barely fits into the background of the movie and the individual settings, and even then it’s hardly noticeable.

“The 355” doesn’t work. Even when the actresses are trying, the poor script, story and directing hold the entire production back. As a result, the film lacks soul let alone any excitement to keep audiences engaged for more than five minutes.

Even with some half present themes of friendship and trust, there just really isn’t anything to latch onto for this movie. It meanders its way from country to country and lame trope to lame trope.

It’s made even worse because this film had the potential to be a new franchise within the plethora of spy franchises. But even when they stumble, the “James Bond” and “Mission: Impossible” films (mostly) know how to make excellent spy thrillers that remain captivating for years later. This movie just isn’t on the same level as most of those films are and it’s kind of a shame.