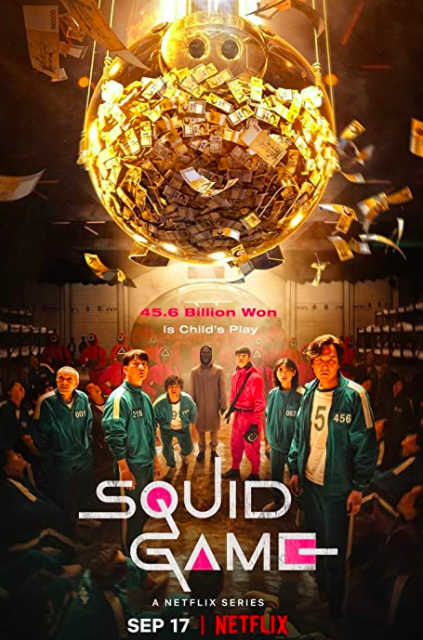 It is currently impossible to do any sort of web-surfing without running into South Korean horror-drama series “Squid Game.”

From videos on how to make dalgona (honeycomb toffee) to Tik-Toks featuring the show’s haunting score, the show has wholly consumed the world’s attention. In less than a month since its Sept. 17 release, it has become the #1 show in at least ninety countries and is on track to become the biggest Netflix series of all time.

“Squid Game” centers around a familiar premise: a death game. 456 individuals from all walks of life, all suffering from desperate financial straits, compete for the chance to win a life-changing 45.6 billion Korean won (~$38 million) in a series of deadly challenges inspired by Korean children’s games. Orchestrating these games are a mysterious army of pink-suited, masked workers, headed by an equally-shadowy leader known only as the “Front Man.”

Although the concept is not unique, “Squid Game” pulls it off and avoids coming off as stale or cliche. One spin on the trope that director Hwang Dong-hyuk uses is the concept of choice. The players are choosing to play the deadly games and can, at any time, form a majority vote to stop the games and return to their normal lives. However, most players choose to keep playing as their lives outside are not much better.

Unlike similar media like “The Hunger Games” and “Alice in Borderland,” which usually features teenagers, “Squid Game” has a diversity in the ages and backgrounds of the players. This creates a broad appeal. There is a character to identify with for everyone.

The characters are undoubtedly the biggest strengths of “Squid Game.” The show does a stellar job getting you to really feel for and with the players, even the ones outside of the core group the show chooses to focus on. When someone cries on-screen, prepare to grab for the tissues. When the characters are celebrating, prepare to rejoice with them.

This is due - in no small part - to the talented and well-rounded cast, which features some prominent powerhouses from Korean cinema, such as veteran drama actor Lee Jung-jae (who plays main protagonist Seong Gi-hun) and renowned actor-singer Lee Byung-hun (who plays the Front Man).

As for blood and guts, the show is not for the squeamish. Players get gunned down, smashed into a bloody pulp and sliced into ribbons at a near-constant pace. There is a side plot involving harvesting organs from deceased players, and the dissections are shown in all of their bloody glory.

If you are planning to watch the show, opt for the subbed version over the dub. The English dub is almost comically terrible and will definitely ruin your experience. The subtitles do gloss over some of the intricacies of the Korean language, but it is a vastly superior experience over the dubbed version.

You do not need to have any prior knowledge of Korean and East Asian culture to fully enjoy the show, and you will not feel alienated. Besides, there is a blossoming online fandom, especially on Reddit, that is happy to explain any culture beats you may have missed (beware of spoilers!).

In conclusion, “Squid Game” is well-deserving of all the hype it is generating. It is a refreshing take on a tired genre, and it dishes up drama, blood and feels without bogging you down. And you will find yourself humming the “Red Light, Green Light” jingle to yourself when you least expect it.

Steel yourselves for the infamous sixth episode, and, again, skip that awful dub.

“Squid Game” is available for streaming exclusively on Netflix.