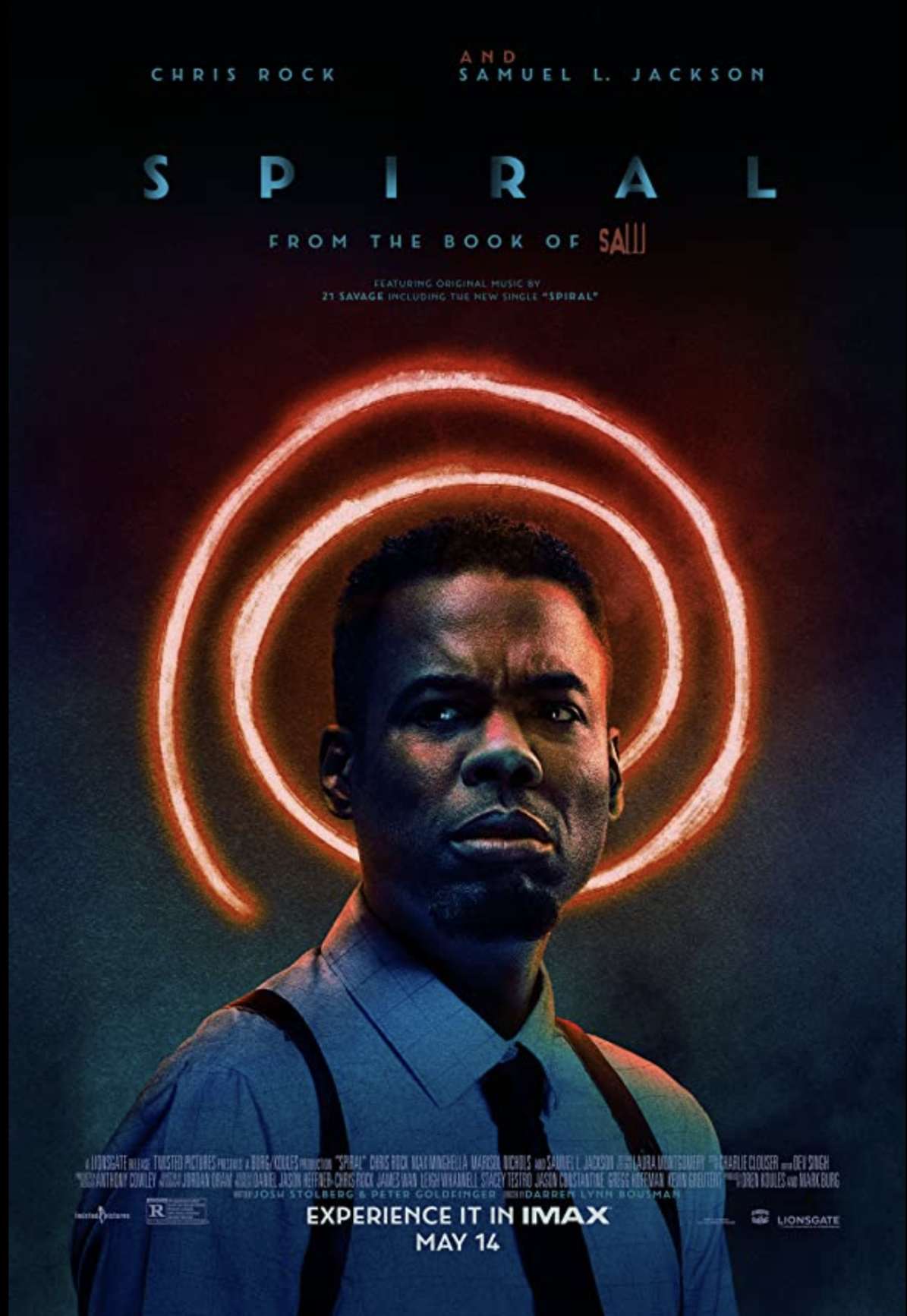 Usually, “Saw” movies are torturous. But this movie is sort of an exception.

“Spiral” is the latest film in the “Saw” franchise, acting as a spin-off within the same world. It is directed by Darren Lynn Bousman, who also directed the second, third and fourth “Saw” films. It is written by Josh Stolberg and Peter Goldfinger, both of whom wrote the 2017 “Jigsaw” film.

The film follows Detective Ezekiel “Zeke” Banks, a cop despised by others on the force for turning in a bad cop. He is joined by rookie Detective William Schenk as they must track down a pig masked serial killer targeting cops, imitating the infamous Jigsaw.

“Spiral” is a film at odds with itself. It struggles in finding an identity of its own while being connected to a larger franchise. It’s a bad and messy film that is watchable and somewhat entertaining.

The cast of this film is fun to watch, but feel out of place at times.

Chris Rock leads as Detective Zeke Banks. His performance is interesting in that it doesn’t work sometimes and works well other times. When he’s playing the detective solving the mystery, he actually gives a decent performance. But at the same time, he switches over to cracking jokes, changing the tone and air of the film on a dime. With that being said, his jokes landed okay, although it was hard to tell if the laughs were because of the joke or because it felt out of place.

The rest of the cast does a decent job as well, but they’re all pretty one note. Max Minghella plays Detective William Schenk and he does well as the secondary lead. Along with them are Marisol Nichols as police Captain Angie Garza and Samuel L. Jackson as Zeke’s dad Marcus Banks. Altogether, they do a good job.

However, they aren’t really given enough time to develop. Other than Zeke, most of the characters don’t have a ton of screen time. Even when they do, they end up feeling like they only have one or two character traits at best. It’s fine, but it feels like there could have been more.

This leads into the main storyline of the film, which also happens to be the film’s biggest issue. For the most part, it’s a pretty standard detective film with the same tropes and formulas being followed. It does an okay albeit fairly generic job.

But what sets the film apart is the “Saw” elements, which ultimately clash with the rest of the movie. Throughout the film, different torture contraptions are shown off, detailing how they work, why they were designed and how they relate to the victims. They do a good job at being brutal and skin crawling, while tying into the film on a thematic level. The issue with these sequences is that they completely change direction from the rest of the movie.

The editing is the biggest offender in this case. For the most part, the editing is pretty standard in the movie. In other words, it’s good. But during the torture sequences, it changes tempo, effects and techniques, making these sections feel separate from the rest of the film. For example, the film will cut between three or four different shots of the victim in agony in quick succession, which happens only a couple times later on outside of these sections.

This ultimately hurts the movie, as it mostly feels like its own film within the “Saw” universe. But it can’t help itself from trying to be a “Saw” film.

Outside of that, the rest of the film’s elements are pretty good. Generally, the cinematography is pretty good, with some interesting shots and some good usage of color in different parts. The soundtrack and score is good too, but it’s not very memorable. Finally, the runtime is quick, which means that it doesn’t take long to watch but it leaves the movie feeling underdeveloped.

Ultimately, “Spiral” is an entertaining film where the parts don’t come together to make a full product. It’s certainly watchable, with some fun yet brutal horror elements and an active detective story.

The film falls flat in connecting those two aspects together. It’s trying to be a “Saw” film and a detective movie at the same time, but it doesn’t work. It feels like it’s wrestling with itself over what type of film it wants to be, only to end up creating a baffling mixture of the two. It should have either changed the “Saw” sections to fit the tone of the rest of the movie or made it a full blown “Saw” film.

“Spiral” is part “Saw” film, part “Seven” wannabe and part Chris Rock stand up routine. It works sometimes and feels confusing other times. At the very least, it works as a standalone film.