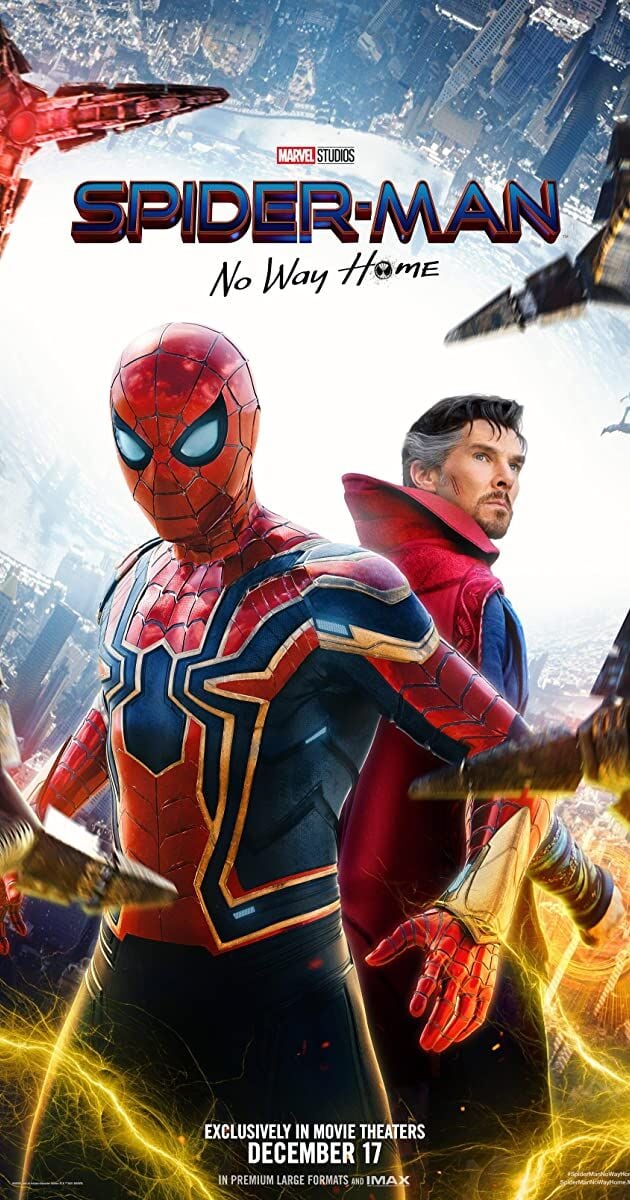 Spider-Man does whatever a multiverse spider can.

“Spider-Man: No Way Home” marks the third solo outing for the Marvel Cinematic Universe’s (MCU) Spider-Man character as well as the 27th film in the MCU. It’s directed by the previous entries’ director Jon Watts, and it is written by Chris McKenna and Erik Sommers.

The film starts at the immediate conclusion of the previous film, with Spider-Man’s secret identity of Peter Parker being revealed to the world. As a result, everybody is vying for Peter Parker’s attention while harassing those who know him personally. Peter seeks the help of Doctor Strange to create a spell for everyone to forget him, but the spell goes wrong and unleashes multiverse havoc that brings back villains from Spider-Man films of yore.

“Spider-Man: No Way Home” combines some of the better qualities of the MCU Spider-Man while pitting him against some of the previous franchises’ best villains. It’s a fun time that really picks up past the halfway point, and it is sure to please Marvel and Spider-Man fans alike.

The film brings back all of the key players from the previous MCU films, including Tom Holland, Zendaya, Jacob Batalon, Jon Favreau and Marisa Tomei. Along with Benedict Cumberbatch, they all do well in the film playing the characters that they have become over the course of the last five years. Although he is not my favorite iteration of Spider-Man, Holland plays the part with energy and fun while building off of those around him and coming into his own more fully than he ever has before.

In terms of returning villains, this film sees a whole cast of old faces coming back to fill the villain seats. From the old Sam Rami “Spider-Man” franchise, Willem Dafoe returns as Green Goblin next to Alfred Molina’s Dr. Octavius and Thomas Haden Church’s Sandman. For the villain representation from “The Amazing Spider-Man” duology, Rhys Ifans’ Lizard and Jamie Foxx’s Electro come back as well.

All of these returning villains are great, and it’s fun to see them on screen again. It helps that their characters have been well established within their own films, so they come onto the screen fully formed and ready to rumble. It’s especially great to see Dafoe and Molina’s excellent portrayals of their characters return.

The good part about these returning characters — outside of some franchise fun — is that it helps set up the multiverse as a tangible construct within the MCU, specifically for the next Doctor Strange film. They are able to use and explain it well for the purpose of this film.

However, the first half of this film drags for a short while as it has to not only reintroduce these villains but also navigate through the consequences of the previous film. It works for the most part, as it does spend an adequate amount of time trying to solve the current situation, before the villains appear, but it does take a minute to truly pick up. That being said, the second half of the film really shines, with several fun, creative and pretty exciting set pieces. Along with that, it builds Holland’s Spider-Man up to a better understanding and representation of the character.

There won’t be any spoils here, so don’t worry about any of that. But there was a slight voice in the back of my head that felt persistent throughout the film.

Despite the enjoyment and fun that the movie brings, it’s mostly towards elements that the MCU Spider-Man didn’t create. Seeing the villains come back is wonderful, but that’s because of decades worth of nostalgia and time spent with those characters. This probably won’t affect anyone else’s viewpoint of the film and it is sure to please fans, but the film ultimately relies on its predecessors to land its final punches. It does help that those moments land and enhance the film as a result.

The only other aspect of this production worth mentioning is its similarity to “Spider-Man: Into the Spider-Verse.” It definitely seems like the filmmakers and producers watched the animated masterpiece and realized that they had to do something similar, too. At the very least, they did it well, but at times I’d almost rather re-watch that film.

Everything else including the camera work, editing and music serve the film — it helps that these “Spider-Man” films have a good theme to back it up while incorporating old scores as well. At this point, this is all typical Marvel fanfare as it gets pushed down the production line, creating a serviceable product for everyone to enjoy. It’s only ever noteworthy when it becomes exceptional, which everything in the story department mostly is. There is one great technical element, and that’s the kaleidoscopic visuals that are brought in from “Doctor Strange” during one set piece, but that’s about it. For the rest of the technical work, it’s fine.

“Spider-Man: No Way Home” is another good entry into the MCU, with some creative and fun elements that help it to stand out a little bit more. These elements are those pulled from other versions of Spider-Man, but it all blends together well to create a fun and memorable experience.

This new Marvel film is almost guaranteed to excite MCU fans along with Spider-Man fans from all over. It’s a crowd pleaser to say the least, but it was an enjoyable time despite my fondness for other versions of this character.

It was nice to see some familiar faces added into this film and it did enhance the overall experience. It is something that this specific film and character haven’t fully brought upon due to their own merits, but it was still done well for the most part.

If there’s any word of advice for seeing it, go in without spoilers if you can, but definitely enjoy yourself and the film. It at least works when you can sit back and watch the film with gleeful delight.

It helps that I could watch Willem Dafoe and Alfred Molina all day.