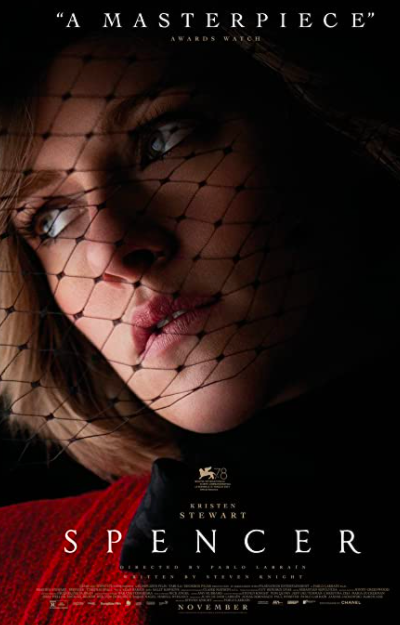 In March of this year, Meghan Markle and Prince Harry revealed some disturbing issues taking place in the royal family that caused them to officially remove themselves from royal life. There were conversations in the palace about the color of their baby’s skin and Markle was denied mental health care while having suicidal thoughts.

Their interview with Oprah garnered public attention and many people have compared Markle’s experience with that of Princess Diana who faced unending attention from the press and had trouble receiving help for her mental health struggles.

In the wake of attention the inner workings of Buckingham Palace have received, “Spencer” chronicles a Christmas weekend Princess Diana spends with the royal family as she grapples with the news of Prince Charles’ affair.

“Spencer,” directed by Pablo Larraín offers a thrilling look into Princess Diana’s tortuous experience as she struggles with bulimia, hallucinations, gaslighting and suicidal thoughts. Although not based entirely in fact, the film will make anyone scared of the toxic traditions of the royal family.

In the same movie where Princess Diana is continually face-to-face with the ghost of Anne Boleyne, she is giving her kids presents in a palace decked with Christmas lights and a gargantuan tree surrounded by gifts. Despite the intermingling of horror, thriller, bio-pic and Christmas genres, “Spencer” paints an elaborate portrait of Princess Diana through a stellar score, phenomenal cast and a harrowing story.

“Spencer” showcases an isolated Princess Diana spiraling into unhealthy behaviors like binging and purging, acting out and cutting herself. Accompanied by a suspenseful score by Johnny Greenwood, we see Diana constantly overwhelmed by the noises around her and the people looking at her. She is filled with warranted paranoia that everyone in the palace is watching and judging her constantly, and the music escalates as her panic intensifies.

The first truly disturbing scene that catches the audience’s attention is when the princess shows up to Christmas Eve dinner wearing a pearl necklace Charles gave her which she claims is identical to the one he gave his mistress. As the sounds of the dinner table overwhelm her and she feels the pressure to be perfect, she begins to tug at the pearls, what she believes is causing her immense distress. The pearls break and fling all over the table and into her soup. She proceeds to eat the soup and crushes a pearl with her teeth and the audience realizes how emotionally scarred Diana is. Larraín quickly reveals that this incident was made up in her imagination and she sprints away in pain.

Contributing to her paranoia is a biography of Anne Boleyne that was left on her bed. She finds herself relating to Boleyne, thinking it is a warning from the royal family that she too may end up being decapitated so that her husband can marry his mistress instead.

She sees what she thinks is the ghost of Boleyne around the palace and when she is on the brink of suicide, she credits Boleyne with saving her life as she tells Diana to break the pearl necklace Charles gave her.

Her time in the palace is so disturbing that it’s hard to watch as Kristen Stewart portrays her almost perpetually in tears. She can’t be on time for dinner, she refuses to wear the outfits picked out for her and she just wants to go home to the house she grew up in. Her childhood home is located on the estate and it is clear she wants to return to her childhood, to being a Spencer, rather than a royal.

The screenplay verges on too overtly symbolic at times. We hear lines about Diana being currency, rather than a human being one too many times. You can get the message that she is treated as an object without many of the lines that screenwriter Steven Knight throws in there.

On the other hand, many parts of the screenplay assist in creating the deep, emotional cuts. Prince Charles is malicious in his words toward Diana, rebuking her for her looks, eating disorder and her behavior that is gaining attention from the press.

The main part of the movie to credit with the haunting portrayal of Diana is Stewart’s performance. Stewart looks unrecognizable as Princess Diana, walking elegantly with a short, blonde bob that almost no one would associate with the “Twilight” star.

In the first scene where she’s shown alone with Prince Charles, she can barely contain her anger as he calls her crazy and acts as if he’s done nothing to damage their marriage. Her hands are shaking while she decides her next move in their argument, a pool table separating them.

There isn’t a great way to describe Stewart’s performance except that every time she was on the verge of a panic attack, I felt like I was too. She leaves the audience desperately wanting the royal family to help her, to believe her, to give her a break.

One of the most effective directorial choices in the film was to exclude Charles completely for about the first 20 minutes. We get to know Diana outside of the context of him, and we truly see how hurt she is before she even comes face to face with the man who refuses to love her anymore. The movie is in no way about him.

Toward the end, there is a montage of Stewart running in all of Diana’s most iconic outfits, including her wedding dress, just before she finally leaves the palace with her sons. Although Larraín probably did this to showcase her breaking free from years of captivity, I found it to be more of just a fashion show. But I’m not complaining about that.

“Spencer” benefits from a suspenseful soundtrack and some impressive directing on Larraín’s part, but Stewart is honestly to credit for the greatness of the film. Without her acting, the story would not have been nearly as captivating. With a fine screenplay and few developed characters besides Diana, the movie would be lackluster without her. But with her, it’s competing for my favorite movie of 2021 so far.