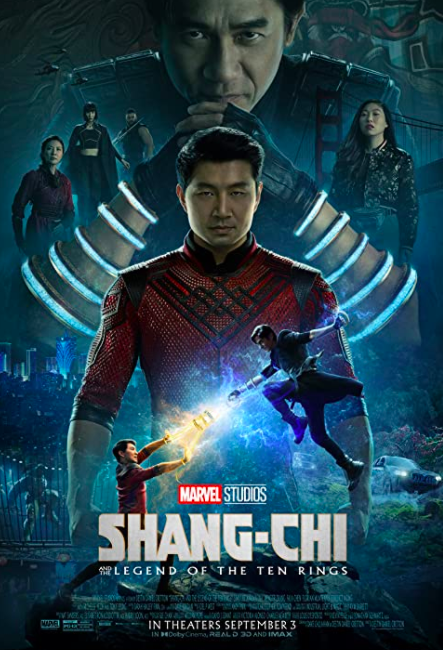 After this movie, Simu Liu could lead the rest of the Marvel films and there wouldn’t be a complaint.

“Shang-Chi and the Legend of the Ten Rings” is the newest film in the Marvel Cinematic Universe, introducing Shang-Chi to the roster of heroes. The film was directed by Destin Daniel Cretton, who directed “Just Mercy” and “Short Term 12.” It was written by Cretton along with Dave Callaham and Andrew Lanham.

The film follows Shang-Chi, a seemingly average valet driver living in San Francisco. But after his immortal father and leader of the Ten Rings, Wenwu, takes the pendant his mother gave him, Shang-Chi and his best friend Katy must travel to Macau, China, to find his sister and stop his father from whatever nefarious plans he has in store.

“Shang-Chi and the Legend of the Ten Rings” is an entertaining, yet surprisingly meditative, Marvel film filled with martial arts, fantasy and good comedic moments. It’s one of Marvel’s slower films but in a great way.

The film stars Simu Liu as Shang-Chi — or Shaun for part of the film. Liu plays the lead extremely well, especially as he hasn’t had much big screen experience up until now.

He taps into the charisma of his character, containing an underlying confidence that carries him through the film. At the same time, he expresses a surprising amount of melancholy, becoming the highlight in one of the film’s more somber scenes. He will make an excellent addition to rest of the franchise as he continues to grow within the role.

Right alongside him is Awkwafina as his friend Katy. She does a great job playing opposite of Liu, providing most of the comedic jabs in the film that landed more often than not. She and Liu have great chemistry, playing off of each other quite naturally. If anything, it’s fun to see Awkwafina in another large role.

Zhang acts cold, showcasing the character’s repressed side before taking command at different parts throughout the film. Leung is powerful as the lead villain, switching from sinister to somber naturally as he explains his human motives.

Along with them, the rest of the cast does well but worked as either minor or spoiler-filled roles. However, it was a breath of fresh air to see a cast that was 95% Asian or Asian American. It’s an excellent piece of representation, especially in the realm of superhero films. If anything, it begs the question: Why hasn’t Marvel done anything like this before?

In terms of story, this film acts by itself, staying mostly self-contained through its runtime. It informs the audience about the characters and their backstories without making it seem as if it is part of a larger narrative.

Essentially, it has a beginning, middle and end, with only a few aspects that might be confusing to viewers who haven’t seen a Marvel movie prior.

The film is also not afraid to get weird, showcasing a variety of fantastical elements that work within the nature of the film and its storytelling. It doesn’t explain everything, but it doesn’t need to because it dives so heavily into the film’s world. It’s kind of refreshing in a way, seeing a big blockbuster movie that isn’t afraid to show off mythical worlds.

Because of the mythical nature of the film, there’s a lot of special effects. Fortunately, it’s all well done, blending pretty well with the human actors and elements of the film. Even when the film became a large CGI battle, it stayed comprehensible and entertaining.

Speaking of battles, the fight scenes in this film are excellent. Pretty much every fight contains a level of martial arts, which fits within the larger Marvel universe. The choreography is great, making the one-on-one combat feel kinetic and grounded.

Along with that, the cinematography serves the action scenes, as it keeps the fights in frame and in focus. For example, there’s a one-shot sequence during the scaffolding fight that is impressive to say the least.

Interestingly, there aren’t many fights in the film. They are sparsely placed, with three standing out in particular. The first fight scene on the bus has a great sense of space, the scaffolding fight has interesting stakes and the final climax has an excellent sense of scale, building from strong emotional combat towards a grand and satisfying finale.

In lieu of the fights, there are a lot of smaller moments interspersed with a few thrilling scenes. These longer and more dragged-out exposition, plot progression and character scenes make up the majority of the film, especially towards the middle.

However, they were incredibly well handled, as the movie showed that it could be interesting without throwing a billion fight scenes at the audience to hold their attention. It wasn’t afraid to sit with these characters as they come to an understanding about themselves and their roles.

Respect is given to the filmmakers for taking their time to build up these characters and the story.

With those scenes, a common theme is presented, which revolves around using your skills to grow up. The theme is set up early, if a little obviously, and pays off by the end with the characters experiencing growth.

Unfortunately, it gets a little muddled in the middle of the film, showing up occasionally but getting thrown to the side at different points. But it’s nice to have a central thematic element in a Marvel film.

The only other disappointing aspect of the film is the music. The soundtrack is fun and filled with songs that fit the tone of the film. Score wise, there is a moment in the bus fight scene that is electric, fueling the undercurrents of the action. But the rest of the score is so fundamentally forgettable that it was a shock to hear something playing underneath different scenes. It honestly felt like they made the “Raya and the Last Dragon” score but worse.

Everything else in the film was great. Outside of the action, the cinematography was sweeping and well composed. The editing did its job perfectly by bringing the movie to a cohesive whole with zero distractions, while having some excellent comedic cuts. Finally, the sound design is great at crafting unique sounds for different elements within the film, especially towards the end.

“Shang-Chi and the Legend of the Ten Rings” works because it’s unabashedly itself. It delivers a fairly self-contained story with interesting characters, kinetic action and great lead performances.

In a way, this film feels like they let the director do whatever they wanted, which resulted in a more grounded film with action that reflects that. Even when it becomes larger than life, it flows into that almost naturally.

It will be exciting to see how future films weave Shang-Chi into the larger narrative. I’m just glad that Simu Liu and Awkwafina are getting bigger and better roles.