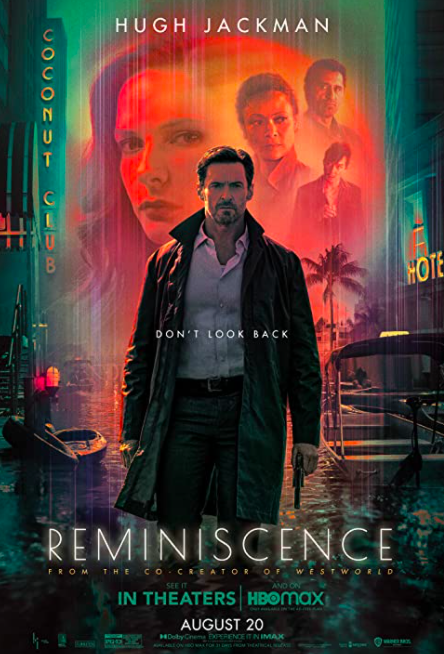 Memories can be painful, especially when thinking back on this movie.

“Reminiscence” is the film debut of writer and director Lisa Joy, who worked on the “Westworld” TV show. It debuted in theaters and on HBO Max for subscribers of the streaming service.

After climate change has altered society, war veteran Nick and his partner Watts operate a business in Miami known as Reminiscence that lets people re-experience their memories. After a new client, Mae, comes in, Nick develops feelings for her and unravels a larger mystery after she disappears.

“Reminiscence” is a film that has all of the pieces necessary to create a suave and interesting neo-noir. But, it never quite puts those pieces in the right order — leaving the film a jumbled mess of ideas with unfulfilled potential.

The film stars Hugh Jackman as Nicolas “Nick” Bannister. He gives a decent performance that never fully commits. He delivers most of his lines in a monotone fashion but with enough intrigue to latch onto, most of the time. The best aspect of his performance is his fashion and overall look, nailing the grizzled and weary veteran trying to grasp onto his one joy.

However, he has an awful narration that runs throughout the movie. It adds nothing to the film besides overly explaining what is happening. On top of that, Jackman sounds bored out of his mind reading the script for it. It’s almost on the same level as Harrison Ford’s phoned in narration from the original cut of “Blade Runner.”

The rest of the cast does better than this narration, but they honestly don’t leave much of an impression. The cast includes Rebecca Ferguson as Mae, Thandiwe Newton as Emily “Watts” Sanders and Cliff Curtis as dirty cop Cyrus Boothe. Everyone does well within their roles, but it feels like they did all that they could for it.

This leads into the writing, which isn’t the worst that I’ve seen. It mostly gets stuck within its conventions, leaving characters with their genre roles as their only definition. Nick is the weary, morally-gray protagonist who will do what it takes to get what he wants. Mae is the femme fatale, always on par with and one step ahead of the protagonist. Watts is the straight woman, keeping Nick in check. And so on and so forth.

In terms of writing, this film is a great example of generalizing character roles to the minimum. Again, it’s not the worst piece of writing in the world — except for the narration. However, it definitely feels like more could have been added to make these characters more dynamic and interesting.

The other aspect of the writing that is close to being good is the structure. There are a few times where the movie makes an interesting decision regarding the order of events. However, there were several moments and pieces of information thrown at the audience with barely any introduction. It’s jarring to say the least, especially when a character in a single scene becomes a major plot point nearly an hour later into the movie.

Along with that, there are various levels of detail and consistency regarding the world and technology in the film. Surprisingly, there is a great amount of detail given to how the Reminiscence works, with an impressive section in which older technology is used by showing how it differs from previous examples in the movie.

But an area that is sorely lacking is world building. There isn’t much given about the world and Miami that makes it feel whole. There are vague mentions of climate change and a war that changed society, but it seems more like an additional thought instead of something that had real consequences. Along with that, the city of Miami never felt lived in. It always felt empty and desolate. It never felt like its own character, breathing and bustling with energy despite the circumstances. It’s hollow.

There were a few moments that shone through the film, showcasing the potential of the premise. But, they were so few and far between that they remain some of the only highlights. The best scene in the film happens near the very end, when Nick is interrogating someone using his Reminiscence machine. It contains moments where the film plays around with the notion of memory, interaction and the lengths characters will go. It was a great scene lost in a stream of mediocrity.

Most of the technical aspects of the movie were done well. The cinematography has a warm glow to it, aiding in the nostalgic aspects of the film. There wasn’t anything interesting or inventive with the camera work, but it got the job done. The editing was mostly good, with a few sections containing a slight offbeat tempo to the cuts. Finally, the sound design was good with a fun score filled with moody guitars.

“Reminiscence” is a film that tries to do several things at once without doing many of them well. It tries to be a smokey, seductive and suave neo-noir film without enough smoke, seductiveness or suaveness.

There were a few moments of brilliance that came through but not enough to keep the movie engaging. The technical aspects were fine, but the writing is where the movie really suffers. It introduces too many plot elements and one-note characters without diving into any of it particularly well.

It’s a movie that tries to hang out with the likes of “Chinatown” and “Blade Runner” without understanding what makes those movies work. It’s not the worst example of the genre, but it’s definitely one of the more forgettable examples.