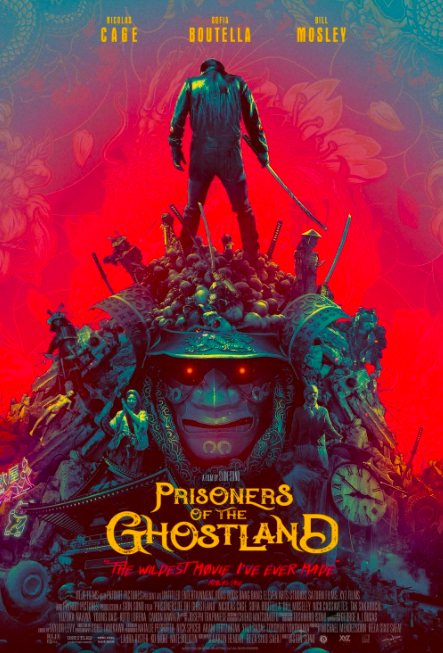 How do you make Nicolas Cage seem like the most normal part of a film? Place him within a Sion Sono movie.

“Prisoners of the Ghostland” is the debut American film from auteur Japanese director Sion Sono, who also directed “Tokyo Tribe,” “Why Don’t You Play in Hell?” and “Love Exposure.” It was written by Aaron Hendry and Reza Sixo Safai.

The film follows the

Hero, a burglar imprisoned for a bank robbery gone wrong. Hero is tasked by The Governor of Samurai Town to rescue his daughter Bernice from the Ghostland, a land dilapidated from nuclear devastation. Laced with an explosive jumpsuit, Hero sets out on his journey.

“Prisoners of the Ghostland” is a wild ride. It’s equal parts campy, perplexing and enjoyable. It works as both a goofy action-adventure film and a great entry point to the wild visions of Sion Sono.

The film stars Nicolas Cage as the Hero. It is an understatement to say that he is perfectly casted in this film, as Cage fits incredibly well within Sono’s filmography. He is utilized effectively as a crazy individual as well as a stoic action star. It’s one of his better performances in a while, except for “Mandy,” which he is phenomenal in.

Alongside Cage, Sofia Boutella plays Bernice, and Bill Moseley plays The Governor. They work well within the context of the film, playing into the campy nature. They both deliver bombastic and over-the-top performances at times, which work together to sell the overall themes of the movie.

Finally, Nick Cassavetes plays the Hero’s former partner, Psycho, and Tak Sakaguchi plays The Governor’s swordsman, Yasujiro. Cassavetes also plays into the ridiculousness, while Sakaguchi anchors the film in his seriousness. They both work in contrast within the film.

The story is rather simple, with relatively clear goals and unclear events that eventually become resolved. This simplicity within the plot allows the craziness to breathe. It also makes sure that the story is easy to follow, with many of the unexplained events throughout the film eventually being explained to different degrees of clarity.

For example, the atomic prisoners just kind of exist within the film. They do receive a reason for being there, but it depends on the audience to decide if it’s a good enough reason or not. For the most part, it's treated with a level of brevity that makes it work.

With that being said, this film is ridiculous. The acting is campy, the world is weird and wackiness exudes from every pore. It creates a memorable experience, for better or for worse. But the film works in crafting a delightfully wild ride.

It accomplishes this in part by blending genres and ideas together to create its world. Samurai Town is a neon-western town filled with cowboys, samurais and The Governor’s “granddaughters,” which is exactly what it sounds (and The Governor is portrayed as the villain for this). In contrast, the Ghostland is desolated, showcasing an apocalyptic wasteland populated by terrified individuals.

It truly feels like Sono watched “Mad Max: Fury Road,” “Seven Samurai,” “The Good, The Bad and The Ugly,” “Tetsuo: The Iron Man” and “Mandy” all at the same time before proceeding to pull various aspects from each one into this film. It’s not of the same quality as those films, but the influences seem clear.

Similarly, the film discusses themes of time and prison, mixing the two throughout the course of the film. The atomic prisoners are stuck in a torturous moment, the Ghostlanders are trapped by the stoppage of time and Hero is bound by a time limit to complete his mission. These themes exist within the subtext of the film, but they aren’t overly present.

As for the text, the film is well made overall, with some stunning cinematography. There are moments of artistry thrown around next to the action sequences and the quaint portrayal of Samurai Town, all accomplished through the camera and lighting work.

The other bits of text are also great, with the editing setting a tempo as well as intercutting between important pieces of information that slowly get revealed over time. The score compliments the film, with sections that replicate westerns as well as give the film an even more cinematic quality than it already has.

One final note, there was a moment near the end that nearly ruined the entire experience. The film builds up for a long time before reaching what is presumably the climax, only to stop everything short for a minute. However, the movie proceeds into the true climax, which was 10 times better than what it initially seemed to be.

“Prisoners of the Ghostland” is a wild ride from start to finish. It’s the vision of an auteur filled with a mixture of aesthetics, a goofy plot and a fitting performance from Nicolas Cage, who is the least insane part of this film.

It works as a collection of influences thrown into a visual smoothie. It’s an enjoyable experience that will be memorable, even if you come out of the film disliking it.

It’s hard to explain, but this isn’t even Sion Sono’s best work. Hopefully, this film will act as a gateway for people to enjoy the rest of Sono’s filmography. You won’t regret watching it and stepping into the world of Sion Sono.