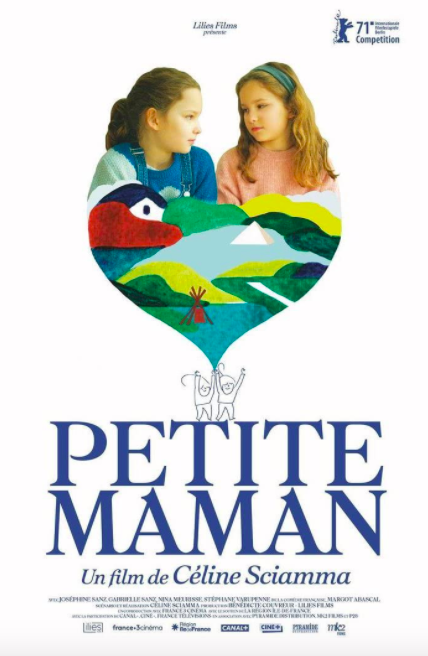 The transportive power of childhood and the woods can help us get through anything, especially with a parental figure by our side.

“Petite Maman” is a French drama written and directed by Céline Sciamma, known for her masterpiece “Portrait of a Lady on Fire.” It was shown as part of the AFI Film Festival with a release date set for Feb. 4, 2022, on MUBI in the U.S.

The film follows an 8-year-old girl named Nelly and her family dealing with the death of her grandmother. While cleaning out her house, Nelly explores the outdoors and stumbles upon her mother’s old hut, which is being built by another girl. The children form a bond while they play and grow to understand each other.

“Petite Maman” showcases the intimacy that marks Sciamma’s work regarding grief. It blends the wonders of childhood with the coping of loss into a beautifully poignant film.

The film’s main actresses are Joséphine Sanz as Nelly and Gabrielle Sanz as Marion. As real-life twins, they build a believable childhood friendship within seconds of meeting each other. Their performances represent the heart of the film as they navigate through tough situations, like losing a grandmother or undergoing surgery.

Joséphine Sanz does this incredibly well as she expresses herself throughout the film. It’s especially impressive as she and her sister are child actors, so seeing this kind of depth and range is unbelievable. It helps that they are paired with several adult actors like Stéphane Varupenne, Nina Meurisse and Margo Abascal who help them grieve, feel and play organically without dismissing their emotions because they’re children.

In 72 minutes, the film tells a straightforward, yet emotionally complex story. It puts emphasis on the unrelenting force of time and how there simply isn’t enough of it to do and say everything that we need to. This is especially pertinent in relation to the loss of a loved one, with the weight and regret of not doing enough for them being pressed upon the characters. It’s a quiet, introspective and universal understanding that the film portrays beautifully.

The film accomplishes this through its small moments, like when characters explore the woods or examine an old pantry filled with insignificant trinkets. These small scenes build towards a larger whole, even if it’s a final goodbye or one last hug. It portrays the moments and actions that you only think about after the fact when it’s too late to do anything else.

That’s one of the key aspects of this film. As the characters realize that there isn’t enough time to do everything that they want to do, they make each moment count, treating the smallest actions as if that’s the last thing that they’ll ever do together. Perfectly in line with that theme, these stuck out to me later, which speaks to the power of the film to me more than it would otherwise.

An example of this can be found within the music or lack thereof. Like in “Portrait of a Lady on Fire,” music is used sparingly as the film waits for the perfect moment to introduce it. In this case, there are only a few instances where music was implemented in “Petite Maman,” but they elevated the moments they were featured in because of the film’s restraint, specifically in a scene near the conclusion.

Going hand in hand with the simplicity, the cinematography and editing are silent, but effective. The film is gorgeously shot in the outdoor sections as well as segments in the main house. It’s elegant in its close-ups and the camera’s stillness, capturing the small moments without taking away from them. In the same way, the editing is thoughtful and connects the film seamlessly while not taking any attention away from the story or characters. Everything works in service to the film.

“Petite Maman” is the kind of reflective film that grows on the viewer later on. Looking back on the film over time rewards the viewer as they subconsciously practice the film’s message and take action over the potential loss that time begets.

Sciamma continues to show her power as a filmmaker to craft intimate, personal and moving films. She is a true artist in that sense, and this film builds on that reputation.

This film speaks to those larger cultural and universal truths that only a few have been able to capture, and she made it harder for herself by focusing on that through the perspective of a child. But she makes it look effortless.

When this film gets a larger release, it’s worth seeking out. My only regret at the moment is that I wasn’t able to watch it again.