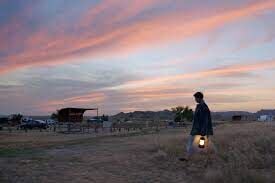 To live like a nomad is to experience the true beauty of the world.

“Nomadland” is a film written and directed by Chloé Zhao, who also made 2017’s “The Rider.” The movie is based on the book of the same name by Jessica Bruder. It is available to watch on Hulu.

The film is about Fern, a woman who lost everything in the Great Recession of 2008. It chronicles her experiences living as a nomad in a van in the Midwest of America as she meets other nomads, works odd jobs and takes in the country.

“Nomadland” is a meditative film filled with small moments and distinct characters that build onto each other. It tells a very human story through the struggles of Fern and the complicated world around her.

Frances McDormand plays Fern, and she continues to prove that she is one of the best actresses still working today. She gives a performance based on small details and real connections. She’s often stubborn but doing so to keep going as she lives her own life and builds relationships. It creates a surprising emotional through line in the film.

She delivers an incredible performance that feels authentic, like she really does live in a van in the desert.

Besides her and David Strathairn, who plays a nomad named Dave, just about every other character is played by a real nomad. They can be a little awkward at times as they aren’t trained actors, but their performances give the film some authenticity and a real sense of place.

The overall story is fairly simple, as it follows Fern’s life over the course of about a year. She experiences different trials and obstacles, but nothing she can’t overcome. The film likes to dwell in different moments, letting the audience soak in the place, people and purpose of each scene.

Ultimately, places and homes are what the film is about. It questions what it means to have a home and how that is defined. For example, Fern feels at home in her van travelling across the country, escaping to anywhere she wants to be. On the other hand, someone’s idea of home might be a house in a suburb or wherever. This theme is developed quite well over the course of the film.

A sense of place is also defined by the cinematography. This film is easily one of the best looking films released in quite a long time. It captures the Midwest in all of its beauty and complexity, with many loving shots of the deserts, mountains and plant life. It does this while showcasing how nomads occupy the land without being disrespectful towards it.

Along with that, the film loves to show people. Several times in the film, the camera will be focused on someone in a close-up profile shot as they tell their story. It really emphasizes the individuality of these nomads and why they live the way they do. It’s an excellent nod to the human experience and how that’s different for everyone.

Chloé Zhao and cinematographer Joshua James Richards do an excellent job at capturing this in the film. Zhao’s direction in particular is well defined and there is a clear vision being brought to the screen by her.

The film is well edited. It knows how long to stay on certain shots and when to cut to gain the most impact within certain scenes. It’s not noticeable often, but it’s very effective.

Finally, the score of the film is quite beautiful. The film features sparse piano pieces (with some additional strings) spread throughout the film. When they are used, these pieces are effective in cementing the weight and emotion of the scene and it helps in making them stand out more.

“Nomadland” explores humanity’s ability to work, adapt and survive to new circumstances. It showcases how we can pick ourselves up and live despite how dire our situation might be. It shows how we can find the beauty within any landscape or problem if we look hard enough.

With a great lead performance and beautiful cinematography, “Nomadland” is worth watching. It delivers its message well and invites the audience to experience an alternative lifestyle than what they might normally know.

You don’t have to actually live like a nomad, but you can still get an idea of how they live life.