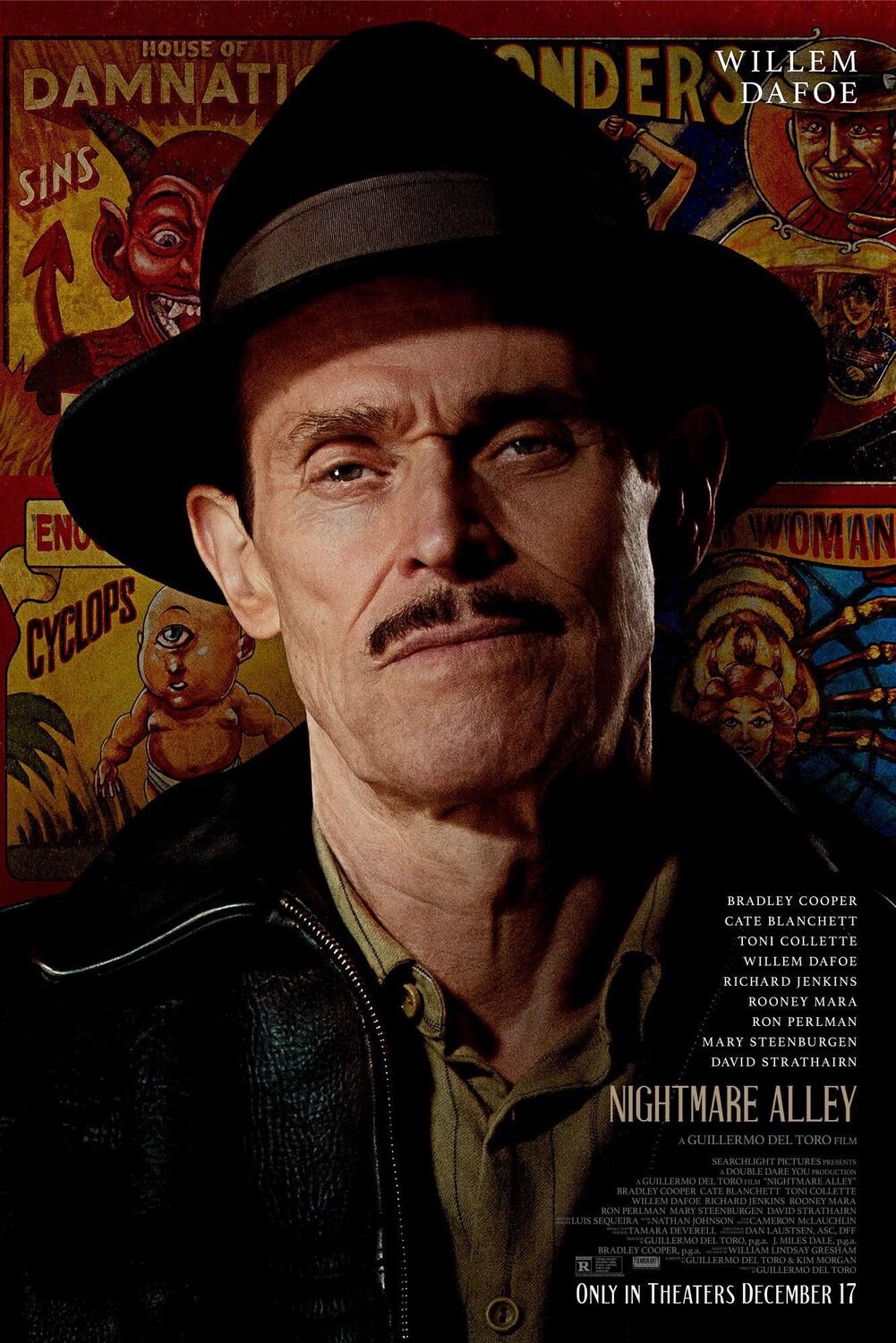 The inevitability of time can wear anyone down to what they were always destined to become.

This is one of the main theses of the illusionary thriller “Nightmare Alley.” This is the latest film from award winning director Guillermo del Toro since his last film “The Shape of Water.” It was written by del Toro and Kim Morgan, and it’s an adaptation of a novel by the same name by William Lindsay Gresham as well as the second film version following Edmund Goulding’s 1947 film.

Set in the late 1930s, the film follows Stanton “Stan” Carlisle, a drifter floating from town to town. He comes across a travelling carnival run by a cast of performers each with a different skill that they use to grift the audience. Stan joins the carnies as he begins to make a name for himself as a psychic.

“Nightmare Alley” is another excellent addition to Guillermo del Toro’s filmography. It’s lovingly shot with a focus on the illusions of the mind and the depravity of those who take advantage of others for their own gain.

The film features a prominent set of actors. It stars Bradley Cooper as Stan, who delivers an excellent leading performance. He uses his southern drawl of an accent to lead the viewers into believing his lies, all while destroying the reality that he’s established around him. His charisma carries the film even when the audience begins to pick up on his deceptions and greed.

Alongside Cooper, the film’s carnies include Toni Collette as Zeena, Willem Dafoe as Clement, Rooney Mara as Molly, Ron Perlman as Bruno and Linden Porco as Brofo. They all create a great atmosphere that sells the carnival as a realistic and often scummy place. But, they provide a sense of camaraderie within their characters and their relationships to one another.

Finally, the film later introduces Cate Blanchett as psychologist Lilith and Richard Jenkins as Ezra. These final performances continue to showcase the depravity that the other characters sell, taking everything in at their word and sometimes twisting it themselves for their own goals. Blanchett especially delivers an excellent performance opposite to Cooper.

As to the story, it’s a long drama that takes its time, which helps to fully establish the world and characters that the film showcases. It feels alive and well — as well as dirty and grimy — as it moves from gorgeous set to gorgeous set. Each scene further establishes the gross elements of the characters’ actions along with the world that they have built upon those actions.

To that notion, the film focuses on the illusions of the mind and how the supposed psychics that run amok even begin to believe their own false realities. It plays towards the preying of lost and sorrowful individuals who only want a moment of escapism, which never results in anything good for anyone involved. Guillermo del Toro does this using the medium of cinema, a slight nod of intentional irony as cinema mimics the realities of the world for the display of the public.

Along with that, the film discusses elements of time, as the continued sinking into the world of illusions crumbles because of time. Coupled with a nice addition of ticking to the sound mixing, time becomes an ever present and overbearing element as the film progresses. It’s a background theme embedded into the underlying aspects of the film, but it plays a key role in understanding the film.

With time as a concept, the film echoes the time period that it’s placed in with the performances and the set design. Working alongside that, the cinematography is absolutely gorgeous, with a brilliant mix of golds and aquamarine woven throughout the film. The classical lighting and subtle framing produce a mesmerizing film that plays into the (false) trance-like nature of the character’s performances.

Finally, the score reinforces the 20th century feeling of the film with its classical and orchestral production. It’s a different style than del Toro’s last film, which was more whimsical, but it still serves the movie perfectly. It’s a beautiful score for a beautiful film.

“Nightmare Alley” is another masterwork from Guillermo del Toro. The craft put on display can only be produced by a director of his talents as he works to create a film reminiscent of a bygone era while showing a depraved side of that same era.

Guillermo del Toro really can do no wrong. He can create a two-and-a-half-hour slow drama about a false psychic and make it one of the most compelling films of the year. If anything, this film is just another example of his talent as a filmmaker who is continuing to build his immensely impressive filmography.

Releasing on the same day as “Spider-Man: No Way Home,” this film is bound to fly under the radar away from most general audience members. But it’s worth seeking out and falling into the world that del Toro brings to light within the movie theater.

Hopefully, you too won’t fall into the well of illusive mind tricks.