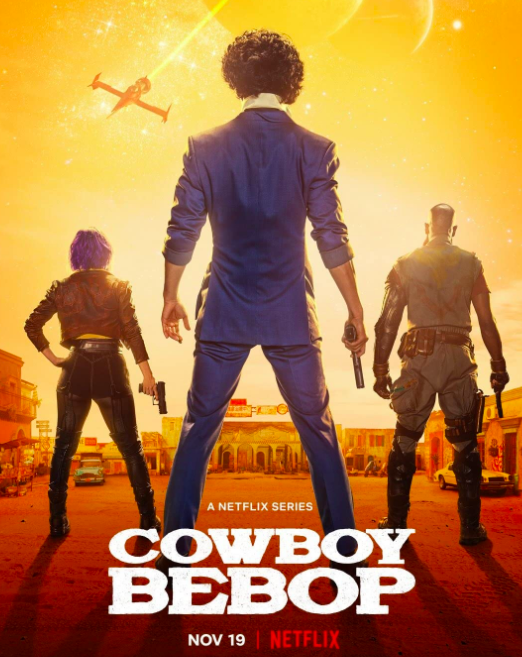 Although not bad, this series has solidified the fact that nothing can compare to the original “Cowboy Bebop,” even when a live action show with the same name rolls into town.

Netflix’s “Cowboy Bebop” is a new live action take on the classic anime “Cowboy Bebop.” It was developed by Christopher Yost and co-directed by Alex Garcia Lopez and Michael Katleman. It runs 10 sessions long with most averaging 45 minutes or longer in length.

Set in 2171, the series follows the crew of the Bebop, a band of bounty hunters struggling to make their next score. The Bebop is composed of Spike Spiegel, Jet Black and Faye Valentine as they hop from bounty to bounty and meal to meal, all while their individual pasts catch up with them.

Netflix’s “Cowboy Bebop” is surprisingly alright, but more so shockingly not a travesty. Although the cast is strong and the show can be fun, some of the individual elements hold it back from being better.

The series has three main leads, with John Cho as Spike, Mustafa Shakir as Jet and Daniella Pineda as Faye. All three do an excellent job in this show. They embody the characters well, even when they differ from the original, and bring some life into the reimagining. They are easily the best part of the whole project.

Cho and Pineda both grasp their roles really well, with Cho nailing Spike’s cool composure even when he adds some more cheeriness in the role at times. Pineda works as the sometimes sultry, but short fused, Faye trying to figure out who she is. However, Shakir is perfect in the role. He 100% looks and sounds like Jet, capturing his gruff and caring nature.

Altogether, they work pretty well. At the start of the series, it’s a little rough. But, by the end of the series, they all play off of each other well and really begin to feel like a team. That’s a little different from the original show, but it works well for what this series is going for.

For the most part, the other actors do well too, even if they’re a little off at times. By far the worst performance and character is Alex Hassell as the main villain Vicious. Although he looks close to the original, he comes across as tempered, emotional and kind of bratty, which really doesn’t work in the show at all.

Even when Vicious takes out a room of people all by himself, he never becomes convincing as a threat. It’s a real shame, as he was one of the stronger villains from the original show. To see him like this is really disappointing. It doesn’t help that his sub-plot that runs concurrent with the show is the weakest part of the show. It grinds the show to a halt at times and throws it off, especially when it could have worked better either in the background or in specific episodes.

That being said, some of the more consistent plot elements work decently. That’s one of the big departures from the original show, which is the live action show’s heavier emphasis on story and developing characteristics. For the most part, it’s not bad. However, it replaces the mystique of character from the original with a surface level and obvious exploration, resulting in a somewhat watered down version of the show.

At times, it feels a little underdeveloped. But it’s not too bad. More or less, it’s the result of a show trying to justify its newfound longer runtime, so it starts to fill that time in with anything. As to the newer plot elements, like Jet’s daughter, it starts out a little weird but begins to have importance later on. It works well at times and is only a little awkward at other points.

One of the more interesting parts of this new show is that it functions more as a reimagining than a straight up remake. For example, most of the individual episode bounties are pulled from the original show, but they place them into new situations and scenarios. The show actually does a good job at keeping it interesting and making it work. It captures some of the better elements of those bounties and their stories and puts them into something that works for the show.

There are a few times where they messed with what was already perfect and it doesn’t work, like with the corgi datadog, Ein and his specific origins. However, these are minor details that can work outside of a comparison to the original, you just have to not think about it. But it’s at least appreciated that the show didn’t go for just a boring shot for shot remake.

Outside of the story, different technical elements work and others are sorely lacking. With a return from Yoko Kanno, the music is still an excellent infusion of jazz. A lot of the songs are from the anime with some new arrangements for them, but there are some new songs made for the show. It works well and they blend well with the old soundtrack. However, they sometimes play songs in weird parts of the show, which works if you don’t know the context of the original track. At times, it feels like they played some songs at random and went with it.

As to the camera work, it’s extremely hit or miss. There are some good shots here and there, but the over usage of Dutch angles makes the whole show look off. The lighting is sometimes fine and other times cheap looking. It also seems like they shot most of it in a wide angle, giving it a goofy look — and not in a good way. Finally, the color saturation and grading is either muddy or colorful, which works at different points and not at all in others. I will say, I dig the '70s and earlier decade aesthetics for the most part.

The editing is sometimes fun and kitschy, with some stylistic choices that make it a little interesting. But the structure of the plot lines and the cutting between them feels off at times, with a strange tempo that either spends too much time on a plot and not enough time on another sub-plot.

Another hit or miss section is the fight scenes and choreography. Actually, it’s pretty good most of the time, with a good understanding of the fighting space and the objects around them. It can feel a little empty at times and it cuts to a few too many close ups which can be confusing. But it’s far from unwatchable, and they’re pretty fun most of the time.

The final major technical element is the special effects, which look great for the most part. It’s at least clear that they spent a lot of time on them. There’s a few weird green screens at times, but the space scenes and landscapes look really good.

Along with that, the ships all look great as well as the technology that is used throughout the series, like the holograms.

Netflix’s “Cowboy Bebop” is far from terrible, but it’s issues keep it from being a good adaptation of one of the best shows of all time. At least the performances are excellent, so it’s got that going for it.

In one word, this show is awkward. It really takes a minute to find its footing while it tries to sell you on the fact that it’s a reimagining of “Cowboy Bebop.” That being said, it does begin to feel a little more natural as the series progresses, and it becomes more enjoyable over time.

This show is sure to be divisive among audiences. It’s not a faithful adaptation, but it’s a little more interesting because of that. But the original is so beloved that it’s hard not to watch this and feel its inferiority. That’s especially made clear through its surface level interpretations of the characters and story.

The performances are clearly the best part of this, and the CGI, aesthetics and plot differences are mostly good, or at least interesting. But some of the other parts of the show range from okay to just plain bad. The camera angles were the most glaring flaw by far.

As a fan, the morbid curiosity of how this show would turnout kept me going. I was surprised at points, and found myself enjoying it in parts. But it’s just not fully “Cowboy Bebop,” and that’s fine. It doesn’t have to replace the original show, and that’s because nothing ever will. It’s fascinating as an experiment and it’s changes are interesting. But I’ll keep going back to the original time and time again, whereas this might get a passing glance years from now.

I’m a little intrigued about what they’ll do next. But for now, it’s just okay. To that, see you space cowboy ...