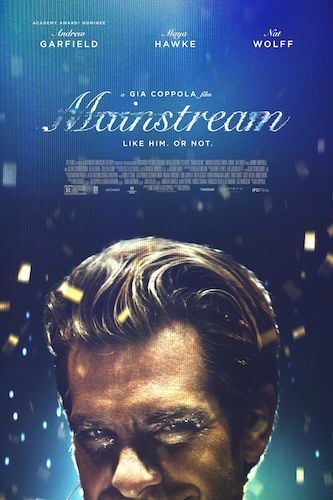 People always lose their way on their path to stardom. It’s inevitable.

That’s one of the core messages in “Mainstream.” The film was written by Gia Coppola and Tom Stuart. It was directed by Gia Coppola, whose previous work includes the film “Palo Alto.” It was released by IFC Films.

The film follows Frankie, a wannabe YouTuber working as a bartender. Frankie happens to meet Link, an eccentric performer who works odd jobs around Los Angeles. Together with Frankie’s friend Jake, the trio make YouTube videos starring Link, which become bigger and bigger as they get more popular.

“Mainstream” is not a great film. There are several flaws, primarily in the storytelling and messaging aspects. But it ends up being an enjoyable film because of its energy and confidence.

The primary stars of the film are Maya Hawke as Frankie, Andrew Garfield as Link and Nat Wolff as Jake. They are also joined by Jason Schwartzman as the producer Mark Schwartz. Everyone in the main cast does a great job in this film.

Maya Hawke does well as a wannabe filmmaker who gets caught up in everything around her. She showcases a lot of range throughout the film, at times being disinterested, upbeat or sorrowful. She does well as the main lead.

Nat Wolff also does well starring opposite of Maya Hawke, especially as her friend and admirer. There are several scenes where he conveys a lot of emotion and information, usually without saying anything. He’s really good in the film.

However, Andrew Garfield completely takes over the movie whenever he’s on screen. His performance as the energetic, dumb but smart and eccentric Link is incredible. He transforms over the course of the movie, taking the audience along with him in his dissent into YouTube stardom. He’s one of the main reasons to watch this movie as he elevates the overall product.

Where the film begins to falter is in the story. It’s a pretty basic story with humble beginnings, the initial success, the growth of the brand and ending with the eventual downfall. The only difference in this film is that it directs its focus to YouTube and its creators. It’s not bad, but it’s a little generic.

On top of that, the film has several messages that it conveys about YouTube, the people (primarily children) who watch it and how the internet corrupts people. It’s heavy handed at best, as it really drives into the audience what it’s trying to say. Although the messages themselves aren’t bad, they are delivered rather forcefully and end up surface level.

However, the film’s depiction of YouTube and its culture is done quite well. It’s obnoxious, but that’s because YouTube can be obnoxious. The film replicates the kind of content that can be found on the platform, even going as far as implementing some of that into the editing of the film.

It feels both out of touch and completely current with the times. Gia Coppola completely understands and misunderstands YouTube, which inadvertently works in the movie’s favor. At times, it felt reminiscent of YouTube channels like jacksfilms and sadworld (which is run by Noah Munck, otherwise known as Gibby from “iCarly”).

Part of this is conveyed through the editing of the film. There are several times where the film uses different imagery and editing tricks that are similar to YouTube videos. For example, there is one section filled with quick cuts, random imagery thrown on screen and flashing colors with title screens. Some people might find it annoying, but it works well for what it’s trying to be.

Finally, the cinematography of this film is fine. There were some interesting choices with a few camera angles (like cutting between film and phone cameras in one scene). However, there were a few times where the lighting was blown out. But overall, there’s nothing particularly good or bad about the way that this film was shot.

Although it isn’t perfect, there’s an air of confidence protruding from this film. Gia Coppola’s directing is pretty precise, especially in her depiction of YouTube. You can tell that she knew exactly what she was doing with just about every aspect of the movie. That confidence is what makes the movie work despite its flaws.

“Mainstream” is a film with a lot to say and nothing to say. Even with great performances, confident directing and an understanding of the culture being depicted, the film comes up short, especially with its story.

That being said, it was still a great experience. Where some people might find it annoying or too on the nose, the film was everything that it needed to be. It isn’t perfect, but it’s enjoyable. That might have just been because of Andrew Garfield, but that’s not a complaint.

At the very least, “Mainstream” is definitely the best YouTube movie ever made. Granted, that’s not a high bar to cross.