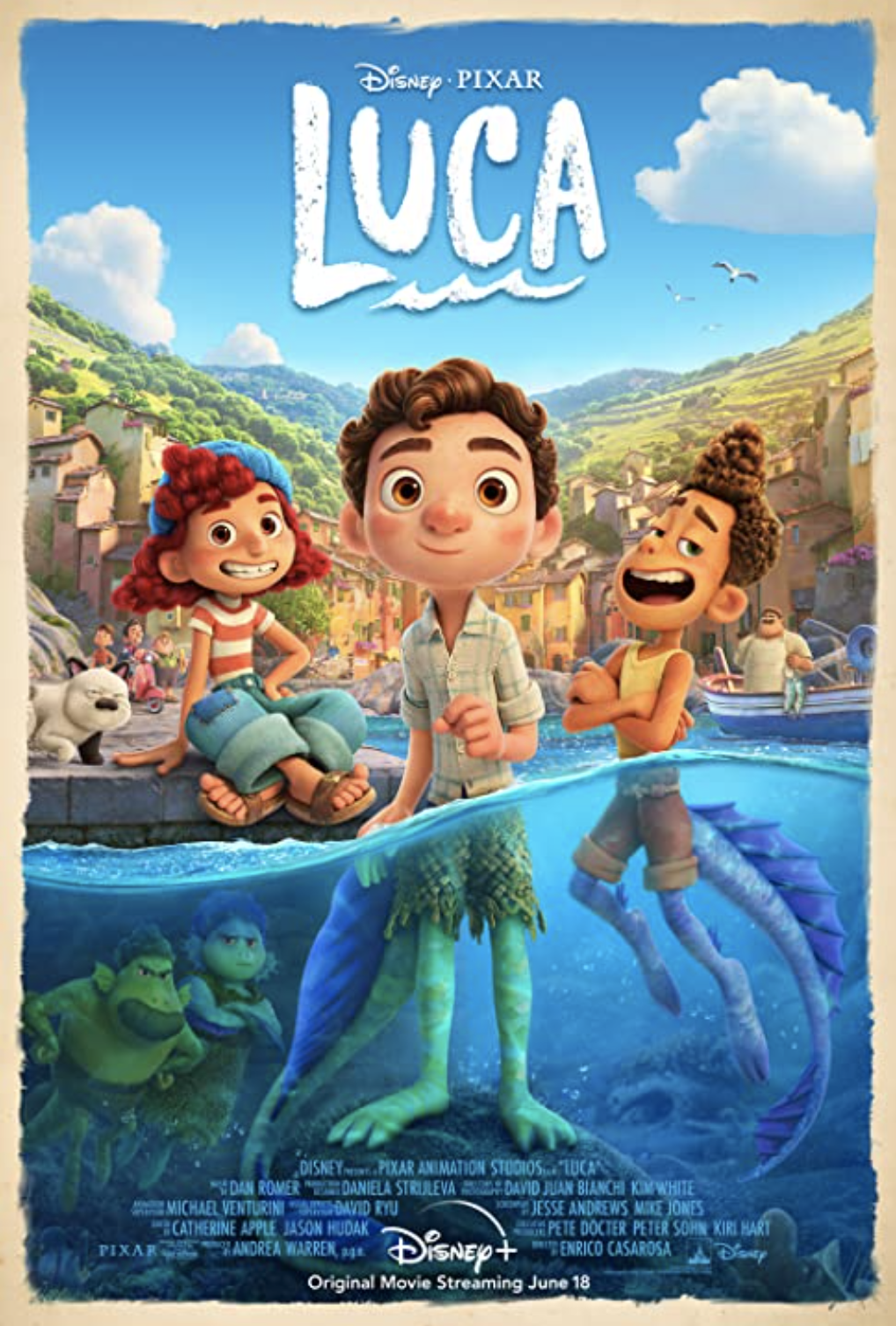 There’s nothing like a holiday off the Italian coast filled with boating, racing and swimming with the sea monsters.

“Luca” is the most recent film from Pixar Animation Studios. It was directed by Enrico Casarosa and was his directorial debut. It was written by Jesse Andrews, who wrote “Me and Earl and the Dying Girl,” and Mike Jones, who co-wrote Pixar’s previous film “Soul.” It was released on Disney+ for free to subscribers.

The film follows Luca Paguro, a cautious boy restricted from leaving his family. Luca becomes fast friends with Alberto Scorfano, an adventurous and “knowledgeable” boy. They run away to Portorosso on the Italian coast, where they meet Giulia Marcovaldo and join her in competing in a triathlon so that they can buy a Vespa and travel the world.

But, there’s just one small catch: Luca and Alberto are sea monsters in a town that despises sea monsters.

“Luca” is a wonderful and vibrant film filled with adventure, friendship and laughs. It has a smaller scale story compared to other Pixar films, but it doesn’t need to be grand to be great.

The cast of this film does an excellent job bringing these characters to life. Luca is played by Jacob Tremblay and Alberto is played by Jack Dylan Grazer. They both perform their characters well, bringing each of their traits forward through their voice acting. Their acting is an impressive achievement.

Along with them is Emma Berman as Giulia, Marco Barricelli as her father Massimo, Saverio Raimondo as bully Ercole and Maya Rudolph and Jim Gaffigan as Luca’s parents. They do a fantastic job at creating distinct and interesting characters. Their performances are fun as they fill their roles with care, love and jealousy.

As for the story, the main plot of “Luca” is fairly simple, especially for Pixar standards. But the movie works beautifully because of the smaller scale and straightforward story. On the surface, it’s a basic plot about two friends with a secret who want to win a race. But it takes its time to develop the character’s relationships, their motivations and their dreams.

Ultimately, it’s a film about the freedom to explore without feeling confined. It’s about the ins and outs of our bonds with others and how they grow over time. It’s about our individual selves and how we not only fit in with others, but also how we can comfortably be ourselves. Finally, it’s about growing out of your comfort zone and trying new things, even if it might be a little scary.

As well as conveying a simple and beautiful story, the animation is stunning. The water, landscapes and dream segments are a wonder to look at; they are filled with such warmth and vibrancy that make the film look like a vacation destination that you wish were real. There is some excellent usage of colors and lighting, especially with different characters (like the sea monsters) and the dream sections.

Pixar already are masters of their craft. Recently, “Luca” and “Soul” have showcased their ability to create incredibly realistic landscapes while blending them well with cartoony character designs that don’t feel out of place. Every character is given depth and traits that are conveyed through their designs, like Massimo’s large demeanor and Luca’s curious eyes.

Another small animation detail in this movie is its homage to Italian cinema. There are many fun references to several famous Italian actors and films, including those from director Federico Fellini. It was something that was mostly in the background but helped ground the film within its setting.

Using animation and writing, this film has some excellent comedy. Surprisingly, there were many hearty and large laughs throughout the movie that were executed well with great timing and expressions. There were also moments of genuine emotion that peaked through because of the time spent building the relationships in the movie. These weren’t just typical Pixar emotions; there is a real emotional connection made in this movie that is presented to the audience perfectly.

Finally, the score by Dan Romer, along with the soundtrack of the film, do an incredible job at capturing the tone and setting of the film. They mostly play within the background, but it felt more like a melody drifting through someone’s window than just background noise.

“Luca” is an absolutely wonderful film with a joyful and simple story about friendship. It does everything that it needs to and more, so much so that the story elements on display would be lost if it was any larger or more dramatic.

In essence, this film captures the best feelings of summer through its setting, friendship and humor. It genuinely felt like a pleasant vacation where the only thing to worry about is who wins the big race.

Personally, “Luca” has breached into my top five Pixar movies. That might be a hot take, but I genuinely enjoyed this movie to the fullest. I could not stop smiling and laughing throughout its runtime and I cannot wait to watch it again.

The only thing that could have made this film better is if it were playing in theaters.