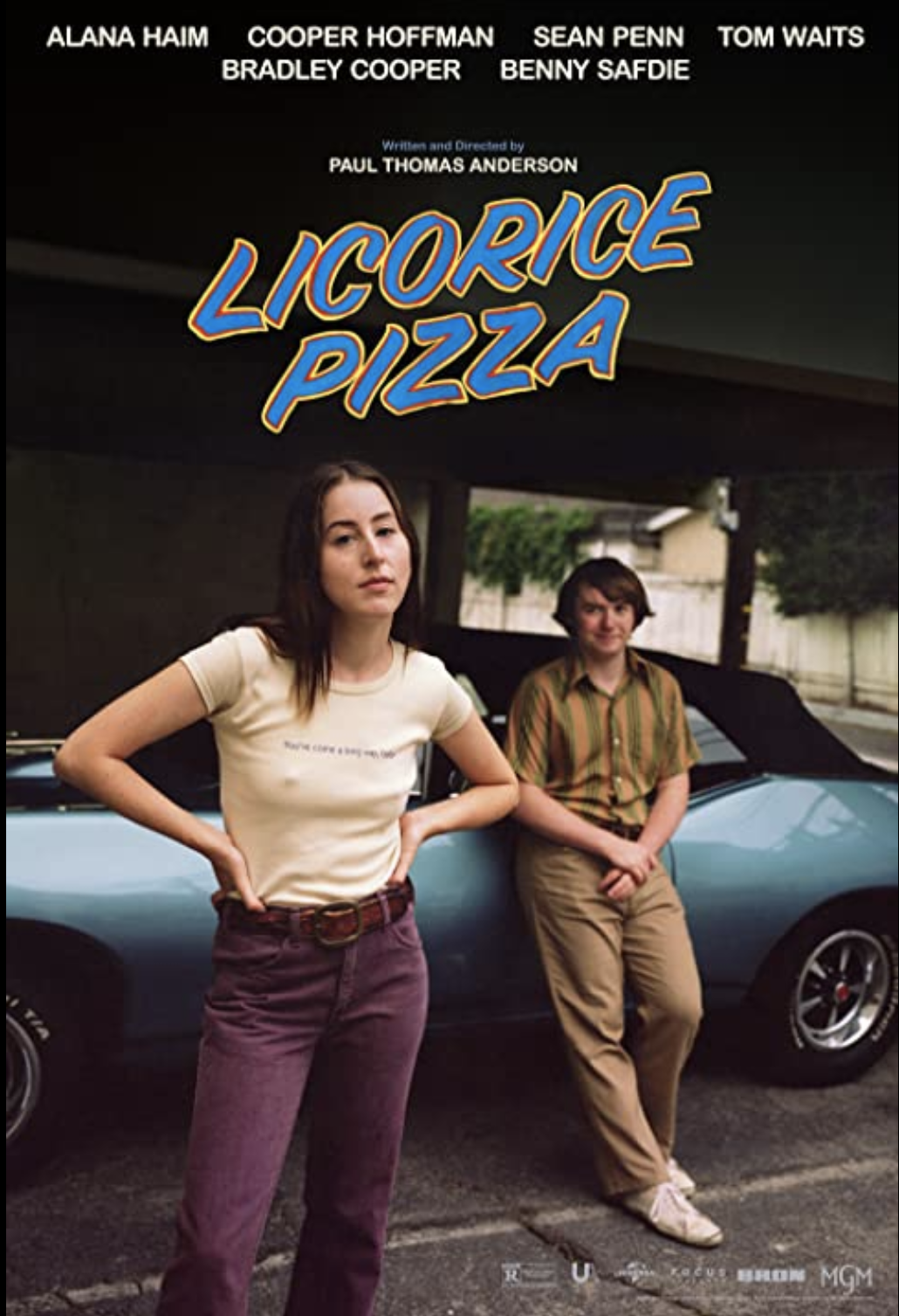 To love and quarrel in the San Fernando Valley.

Released on Christmas Day, “Licorice Pizza” is the newest film from writer and director Paul Thomas Anderson. The coming-of-age drama arrives four years after his last film “Phantom Thread,” and he is known for his impressive filmography including “There Will Be Blood” and “Boogie Nights.”

Set in 1973, the film follows high schooler and entrepreneur Gary Valentine as he meets the 25-year-old Alana Kane. They form a companionship as they navigate through several acting gigs, business ventures and summertime flings.

“Licorice Pizza” comfortably stands alongside Paul Thomas Anderson’s best work, as well as some of the best films of the year. It’s a dreamy California feeling the whole way through and it’s sure to carry anyone along for the ride.

The film stars Alana Haim as Alana and Cooper Hoffman as Gary. This is the first film for both actors and they completely nailed it. They both give incredible and down to earth performances, all while playing with and against each other the entire film. There’s a sense of understanding between the two of them as they know just the right buttons to push in order to aggravate each other. Their performances are the heart and soul of the film.

There are several other actors that appear in various parts, including Sean Penn, Tom Waits, Benny Safdie, Mary Elizabeth Ellis and Harriet Sansom Harris. But the true scene stealer is Bradley Cooper’s take on Jon Peters. He gives a hilarious performance as he chews on every line and shot that he’s given in the film. Cooper, and everyone else, do incredibly well within their roles.

However, the focus is on Gary and Alana as the film travels with them through their relationship and business adventures. While Alana rejects Gary because of his age, they consistently grow jealous of the other when one of them begins a relationship, but they only push so far to get on their nerves without actually getting in the way of those potential romantic interests. Along with that, they work together to create elaborate businesses, mostly revolving around the newest fad. The movie shows the success and failures of their small business world well.

However, above the petty relationship squabbles and the short-lived business exists the larger realm of possibility. Seen within the detailed closeups, warm color tones and the subtle, sweeping camera movements, the void of infinite possibilities, connections and directions can be found within the eyes and souls of these characters, with Gary’s young optimism and Alana growing weariness of the world of work influencing every decision that they make together. Albeit only ten years difference, they almost exist worlds apart in how they perceive and understand the world.

Despite that, they have an uncanny knowledge of each other and how the world works through each other’s eyes. The intangible connection that draws the two of them together simultaneously drives them apart. But as the camera follows them as they run towards each other over and over again, these grander elements of the infinite universe follow along with them. Their wild ambitions become something to hold onto while one of them sips martinis with an actor, just to piss the other one off.

That’s the entirety of this film put onto display for the whole universe to see. It doesn’t matter whether or not there’s a substantial plot or mind-blowing action. Instead, the film’s presentation of these two cosmic forces vying for the other’s attention all while it perfectly places the audience within the time period of the film is what ultimately drives this master’s work.

There is probably some more to be said about the other elements of the film, like the groovy soundtrack, the attention to set detail and the rhythmic editing, but it doesn’t matter. All of that is perfect, and it is in service to the film as a whole. But none of that is the focus of the film. The film couldn’t function without everything within it, but to be paying attention to anything else that isn’t Gary or Alana (or Bradley Cooper to a degree) means you aren’t watching the film that is in front of you.

“Licorice Pizza” is an almost indescribable trip. It’s consistently irrelevant, floaty and can feel like it goes on and on without any point. But it’s an unforgettable trip, the kind that reveals more about the individuals involved on the journey than it is about wherever they end up at. It’s a trip you come out of with a better understanding of who you are and the world around you.

As the film unfolded, it was impossible to not see the endless possibilities given to these unstoppable forces of characters. While they grasp at their understanding of themselves and their relationship to everyone around them, the broader universe awaits them and their every movement. Every action not only has the appropriate reaction, but they each carry a weight that leaves an impression for the remainder of the film. It is breathtaking.

At the same time, this film is an easy breezy experience. It acts like a fun trip to the gas station with your friends, goofing and laughing the entire way. Does it mean anything? Probably not. But that memory and that experience is something to hold onto. At times, those are some of our best memories.

Paul Thomas Anderson is a master of the film craft, and this film continues to showcase that. His ability to create something both obtainable and easy to grasp while also creating it into a grand experience is something that only a few people can do. It’s a true treat when he delivers a new film.

There’s a chance that this film might not resonate with everyone, as it exists within that sub-genre of irreverent films. For some people, that’s not their cup of tea. Regardless, “Licorice Pizza” is one heck of a powerful feeling.