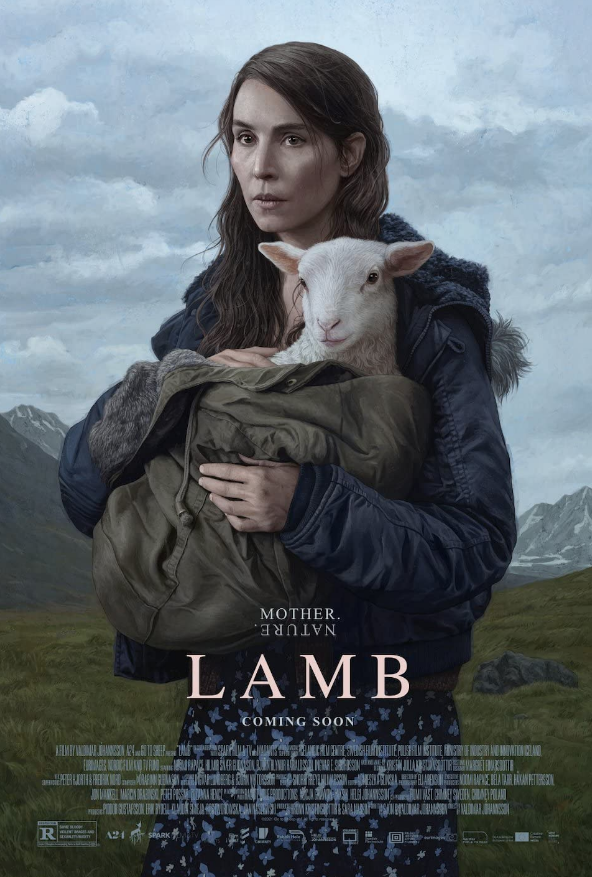 A hardworking mother, a farmer father and a half-child, half-lamb. A picture-perfect family.

“Lamb” is a supernatural Icelandic film by Valdimar Jóhannsson, marking his directorial debut. It was written by Jóhannsson along with Sjón, a novelist, poet and Björk collaborator. The film was released by A24.

The film follows María and Ingvar, a husband-and-wife farming team. After one of their sheep gives birth to a lamb that is part human and part sheep, they care for it as if it was their own child, naming it Ada. Even after Ingvar’s brother, Pétur, visits and doesn’t understand their relationship, the couple continues to love and care for Ada.

“Lamb” is an intriguing film that is oftentimes weird just to be weird. However, it’s a mesmerizing film, allowing the audience to be transported into an experience that seems otherworldly.

Noomi Rapace stars as María, and she gives a quiet and somber performance. Along with the other characters, she rarely talks, mostly delivering emotions and information through small facial movements and gestures. She does a great job in the film and gives a fairly emotional performance through very minute actions.

Along with her, Hilmir Snær Guðnason plays Ingvar, and he gives a similar performance along with Rapace. He’s often quiet, letting the scene and character live through the experiences in the film. There are several small moments that he performs beautifully, like an early scene of him driving a tractor by himself and breaking down into tears.

Finally, Björn Hlynur Haraldsson plays Ingvar’s brother Pétur, who is the liveliest character in the film. He throws a perfect wrench into the family’s lifestyle, questioning the structure and supernatural aspects of the situation. He performs well as the odd man out.

All of these performances melt into the dreamlike nature of the film, especially because of the barely present dialogue. They often seem in a daze, which helps the film more than if their characters and performances were overly dramatic, comedic or horrific.

This fits within the story, which is told over three chapters. Details begin to emerge as the film progresses, with several aspects hinted at, but without any over-explanation. It works well, as the audience needs to pay attention in order to pick up what’s going on. Granted, there really isn’t much to grasp within the film, as everything is kept pretty simple.

Without spoiling anything, the film does have some wild twists and developments. Although they seemingly come out of nowhere, it’s all cleverly set up throughout the film. Even then, it still works as a mesmerizing experience even if you only half pay attention.

This is helped immensely by the cinematography, which is simple yet beautiful. The landscapes of Iceland are shot with incredible detail, transporting the audience there while making it feel like another world, one that is devoid of civilization outside of the overcast farm.

The film is shot minimally, with deliberate camera movements and excellent framing. The lighting is especially interesting, as it never gets dark in the film, with nighttime coming across as just more overcast. Overall, it works by making the film feel more idyllic than it already is.

The score is also interesting, as it is very short and intense. It creeps into different scenes before disappearing for a long time. But every time it came back, it fit well within the scene by carrying a droning note or anxious strings. It lulls the audience further into the film’s world.

Although everything previously described sounds calm, it is hard to watch the film and wonder what the point of it all is. For the most part, it is just about two farmers raising a hybrid human and animal. As interesting a concept as that is, it’s almost boring in a way, as the film brushes some of that to the side.

However, the film does introduce different conflicts that deviate from what might be a normal plot about people raising a child. In turn, it keeps the film interesting in different regards, some of which relate to the themes the film presents.

Seemingly, one theme suggests an exploration of parenthood, showing both how selfless and selfish it can be. The farmers simultaneously care for the child and will do anything to make sure that Ada is safe, but at the same time, they won’t let anyone, or any animal, take her away from them.

The couple begins to show a form of resentment against people who don’t get it or try to take this “gift” away from them. It shows them as people who are clinging onto an idea because it’s something that they have always wanted, and now they’ve finally gotten it.

At the same time, the film also seemed to suggest a theme of disability, with María and Ingvar doing everything they can to love and protect Ada, who is deformed. It’s a positive film about how a differently-abled person lives and how the people around them care for them. Granted, that might be reading into the film extensively, but it was an observation.

Unfortunately, these themes aren’t overly present within the film. They might be lost among viewers as a result, which is upsetting because they made the film more interesting. For me, it elevated my understanding and enjoyment of the film past the concept alone.

The concept and the film outside of those themes is still good, but my reading of the film helped shape it into something more for me. Ultimately, that’s what will determine if this film lands with audiences: whether or not they read into the film more.

“Lamb” is a film with a weird premise that seemingly doesn’t do much with its concepts. But its somber performances, dreamy cinematography and underlying themes help make it a worthwhile experience.

The film acts as a trance, with everything working towards this purpose. The film felt otherworldly most of the time, especially with the acting and camera work. It might be boring or too sleepy for some, but it worked for the most part.

This movie is the poster lamb for A24, as the internet will inevitably breed jokes about the nature of the production company making weird films, despite the plethora of other production houses attached to this movie. Granted, A24 has made enough distinct films where everything they touch has its own quality to them, but this film might act as the main “A24 movie” for a while.

If anything, this film has a unique directorial vision, especially since it’s Valdimar Jóhannsson’s first film. He will be a director to look out for in the future, with this being a pretty solid introduction to his filmography.