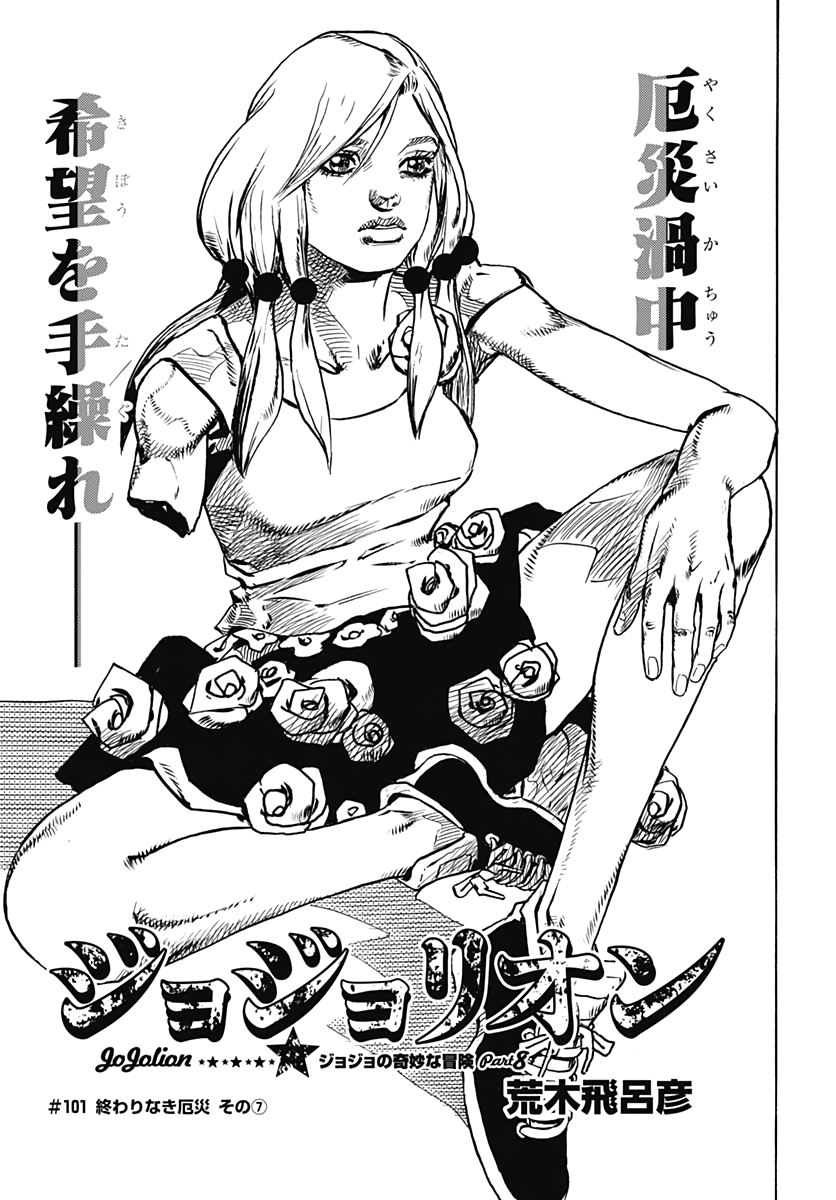 Following the discovery that Josuke Higashikata’s Stand ability is actually a spin based Stand, just as his ancestor Johnny Joestar’s was, chapter 101 pans back to the collapsed body Yasuho.

Missing and arm and bleeding out, her only saving hope is Joshu — not a great hope.

The discussion between them takes up almost the entire chapter, and this is one of the most uncomfortable bits ever put into the pages of “JoJo.”

Situations like this in the past have been framed as comedic in various ways. If this was meant to be funny, it completely flops.

Rather, Joshu wants to forcefully combine his and Yasuho’s bodies and become one using the alchemical properties of the ripened Rokakaka fruit.

While saying this, he’s on top of her, holding her down as she’s bleeding out and maimed, whispering odd pet names into her ear as he fantasizes. They must become one.

It doesn’t quite need to be spelled out what this is supposed to represent. However, what Yasuho does to reverse the situation, and effectively reverse Josuke and Mamezuku’s losing fight against Wonder of U, is genius.

The twist works so well because it makes total sense with what we know about the fruit and what we’ve seen it do in the past. Joshu had it right, it could perform an equivalent exchange between them.

The thing is, Yasuho just needs her arm back, her vitality back. With that, Yasuho big brains everybody.

Despite the content of the chapter being so satisfying to see play out for Yasuho’s sake, the chapter is hindered by how drawn out it is. Most of it could be cut down to about half the space it ended up taking up.

The chapter’s cliffhanger ending, setting up the confrontation between her and Tooru, could have been explored, expanded on and made to have more tension.

At this point we are just left with two people staring at each other. Yasuho’s Stand can’t fight, and Tooru’s Stand is busy fighting Josuke at the hospital.

Artistically, Araki’s shading was very noticeably reliant on screen tones, and the same screen tone almost every time at that. Places where that kind of shading wasn’t necessary were wrought with an abundance of screen tones.

This led to a homogeneity in the texture and depth of every panel. More variance in the value of the various panels would have been far more visually appealing, especially when almost every scene is just Joshu and Yasuho in the middle of a driveway.

This ties back into the fact that the chapter could be cut in half and filled with more interesting things. While the content generally was good, the allotted space probably could have been utilized more efficiently to convey more story.