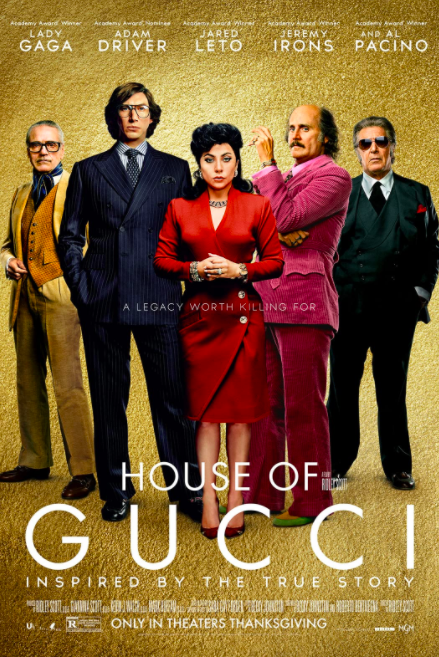 Family business needs to stay out of the family drama, or is it the other way around?

“House of Gucci” is a crime drama based on the book of the same name. It was directed by Ridley Scott, known for this year’s “The Last Duel” and “Gladiator.” The film was written by Becky Johnson and Roberto Bentivegna.

“House of Gucci” is nearly an engaging, thrilling and captivating crime film. But not even the performances can save this meandering, overly long film.

The film has an all-star cast, with Lady Gaga as Patrizia, Adam Driver as Maurizio, Jared Leto as cousin Paulo, Al Pacino as uncle Aldo and Jeremy Iron as the father Rodolfo. The performances are over-the-top and hammy, but in the best way possible. Everyone melts into their roles, and they really sell this glamorous, extravagant lifestyle that the Guccis live. Even though the accents are goofy and not very accurate at all, it still works because of the dedication from the actors — for the curious, Jared Leto had the most accurate accent, according to The Cut.

Despite the great and melodramatic performances, the rest of the movie can’t keep up and it drags behind. Told over the course of two and half hours, the movie doesn’t do enough to justify its length. It goes on and on about small details that barely build up to anything. Even when it does begin to get more interesting and thrilling, it’s too little too late and there isn’t any excitement towards the events.

It’s a slow burn when it should have been a mile a minute ride exploration through this backstabbing, plotting and conniving family. There’s no real sense of pacing or justification for the length of the film. Surely, there’s a tighter two-hour film buried within this Gucci purse film, but as it is the film kind of slowly sinks over time.

That’s not to say that it’s awful or completely boring. It is still an intriguing story that is mostly competently made. The cinematography is strong even when it blends too many mute and muddy colors together, and the soundtrack is a killer representation of the time and gives the film some much needed rejuvenation.

The editing is also good, but it’s extremely unclear how long the film takes place. It was shocking when the realization hit that 20 years had passed in the movie.

There just isn’t enough life, energy or style to really hold this movie together. The film’s dry and calculated approach could work well as a shorter movie, fitting along with some of the plotting that occurs to gain familial and corporate power. But that approach is much more noticeable within a longer film, and it can really drag at times.

The only time that any noteworthy stylistic choices took place was a transition to black and white when press photos were being taken. This only happened three times in the movie, but they were placed so far apart from each other that it was only barely recognizable. This decision is an interesting one, especially in changing some of the film’s presentation, but it’s just not enough.

“House of Gucci” takes the wrong approach for the type of story that it wants to tell. The performances are grand, but the rest of the movie doesn’t stand close to matching with the melodramatic characters.

What should have been a huge, sweeping and thrilling story about one of the biggest fashion brands of all time fails to capture the viewer’s attention through its overall execution. The film misses the mark by a decent margin, resulting in a somewhat boring film.

It’s frustrating because the blueprint for this type of film has already been set. “Goodfellas” by Martin Scorsese is not only one of the best mafia films ever, but it’s a masterclass in handling information, pacing and a dozen characters in under two and a half hours. Even Craig Gillespie’s “I, Tonya” does this well and with style, telling a crime story and a sports drama in one.

Although it’s trying to set itself apart, this film just kind of flounders without knowing what it’s doing. It felt like reading an essay, but the kind where the person meanders through it and overwrites on purpose to fill an arbitrary length. It’s good, but it’s trying really hard to justify that length and it fails to do so.

It will probably play well to general movie goers, especially with its high audience score on Rotten Tomatoes. However, it’s more of a poor knockoff Gucci purse than it is anything else.