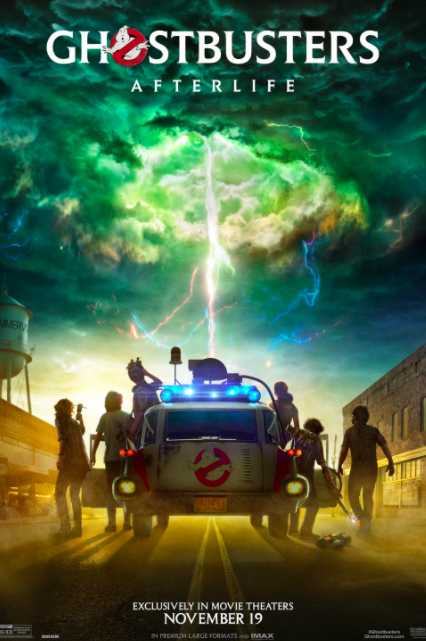 Sometimes, it might be best to leave the past behind us.

Set in Summerville, Oklahoma, the film follows Callie, Trevor and Phoebe, a poor family that moves to the small town after the death of their grandfather. Once there, they begin to uncover the secrets of their grandfather’s past while strange earthquakes riddle the town, resulting in a reemergence of ghosts after 30 years.

“Ghostbusters: Afterlife” is the kind of film that is decently made but is serving such a specific audience that it’s hard to get into from the outside of that fandom. The strong performances and filmmaking don’t help this film from dragging behind its nostalgia-blind goggles.

Along with her, there’s Finn Wolfhard as Trevor, Carrie Coon as Callie, Paul Rudd as the teacher Gary and Logan Kim as Podcast. Everyone brings their characters to life while setting them apart, like the mismanaged Callie, the moody teenager Trevor and the nerdy hunk Gary. The only performance, more so character, that didn’t work at all was Podcast, which serves the purpose of being annoying and cringey. It doesn’t really work, but that’s not Kim’s fault.

As for the story, it’s fine, especially during some of the more sentimental parts. It introduces characters, plot lines and drama well, but it loses itself in its over-reliance on past films. There are so many references down to the tiniest line readings or background jokes from the original in this film that it virtually makes no sense to someone who hasn’t seen the original film.

That seems like a silly thing to say. Of course, a sequel made decades after the original film would cash in on the nostalgia for the previous films. But this film nearly takes it to a new extreme. It’s not for fans of the first or second film: This movie is for the super fans that have based their entire life on this property.

It is overstimulating how many small jokes from the first film are given new sentimentality within this film. It’s kind of annoying in a way. It is so over-reliant on that nostalgia that it clouds the rest of the film. The rose-colored glasses are overbearingly strong in this film.

The blinding nostalgia blinds the viewer from some of the other problems with the film. The pacing is unfortunately slow. It felt like it was getting to the third act by the halfway mark, with a silent groan uttered at the realization that there was an hour left. It’s not abysmal, but it is slow, and not in the best way.

Along with that, it’s not very funny. There are several endearing jokes that work well over the course of the film, but a good handful of them don’t land at all. Some landed strongly and produced some good laughs, but for a film that is a sequel to one of the best comedies ever made, it really doesn’t live up to it.

As for some of the technical aspects, everything is done well. The special effects all look great and there’s a real sense of weight given to a lot of the props and ghosts. The camera work in the film is solid with some excellent lighting in parts. The editing is also sound, with the only major gripe directed towards the aforementioned pacing.

However, there is one last thing that got annoying. That aspect is the score. Back to that nostalgia, it pulls a lot of the score — or at least the sound of it — from the original films. It doesn’t work well, especially because the tones don’t match this film.

The film is trying to be more serious and sentimental, which doesn’t mesh with the fun and goofy score from the fun and goofy original film. It kind of seems like they didn’t have a good score to begin with so they added it last minute, which makes sense because the new score is utterly forgettable.

“Ghostbuster: Afterlife” is an exercise in nostalgia bait. It focuses on so much fan service from the original films that it loses its identity in the process. As a result, what was supposed to be a sentimental return to form feels more like an empty cash grab at times.

That’s not to say that this film is bad. It is well made for the most part. But the overabundant nostalgia for insignificant parts of the original movie keeps it from being anything more than a shell of the former films.

This film is only for those that not just love “Ghostbusters,” but name their kids after characters in the film. They are sure to come out of the theater with smiles on their faces as they plan the next five times that they’ll see it. Outside of that, it’s a pretty good film with some heavy weights that keep it down.

At the very least, it still functions as a watchable film. Some of these nostalgia bait movies can’t even claim that half the time.