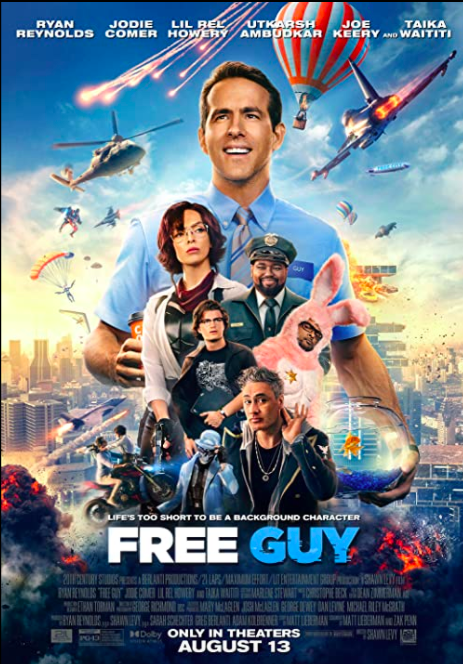 Sometimes, the main character doesn’t have to be special; he can just be a normal, milquetoast, regular guy.

An action comedy set inside a video game, “Free Guy” was directed by Shawn Levy, who also directed the “Night at the Museum” movies. It was written by Matt Lieberman and Zak Penn, the latter of which wrote the “Ready Player One” film adaptation.

The film follows Guy, a non-playable character (NPC) in the fictitious game Free City. Inside the Grand Theft Auto-like game, Guy lives on a path: wake up, get coffee, go to work, ad infinitum. But after running into the player Millie, AKA Molotov Girl, Guy begins to think for himself, breaking from his set path in the game.

“Free Guy” is an enjoyable enough film filled with fun video game aspects. It has a deep enough level of complexity, which makes it a little more interesting, especially in its discussion of artificial intelligence. But altogether, it’s a typical film set inside of a computer that doesn’t do enough to make it special.

Ryan Reynolds stars as the titular character, Guy. Reynolds does his usual shtick, playing the average Joe white guy. But he does it so charmingly and with enough charisma to carry the film, especially as he becomes more aware and powerful throughout the film. It’s the role he’s perfect for.

Along with Reynolds is Jodie Comer as Millie/Molotov Girl. She does a great job, especially in switching between her fairly regular real self and her badass online persona. She stands well next to Reynolds as the secondary lead, holding her own opposite of Guy.

The film follows a pretty standard plot line. It does everything well enough, especially at staying easy to follow. There’s not much complexity within the structure or order of events in the film, and that’s fine. It doesn’t need to be overly complicated to be enjoyable.

However, there’s a decent amount of weighty conversations towards the middle of the film, when Guy realizes that he’s in a video game. The movie explores the implications of Guy’s fictitious nature and what it means to be alive, resulting in one of the better scenes in the film (a scene with two characters just having a conversation). It’s not as well thought out or sophisticated as similar films like “Toy Story” or “The Matrix,” but it works well here by adding more to the film than just funny video game references.

Speaking of, there are a handful of references and design choices centered around video games. One of the more prominent examples is during the climax of the film, so it won’t be spoiled here. But the ending pulls out all the stops, and it utilizes those references well.

There are several visual jokes and details when the film is inside the game that work well. For example, player characters will sometimes keep jumping around in the background (which is more accurate than you would think).

However, there’s one issue with the film’s depiction of video games, and that’s Free City itself. The movie continuously switches between depicting the real world and the game world. It’s always presented in live action no matter which perspective it is.

When they show the game in the real world, it looks like a mobile game advertisement, meaning it looks cheap, fake and unplayable. It threw me out of the movie every time, especially because a game like that would not be as popular in reality as it is shown in the movie.

I’ve been struggling to decide if this decision was ironic or not. If it is, then it’s a clever gag about the pervasive mobile game ads that plague everybody. But if it’s not, then it seems like they didn’t know how else to make the game look like a real video game.

Generally, this aspect seems to be a clever gag, but it still doesn’t sit quite right, especially since every other video game aspect is handled well. It could’ve worked better if all of the video game parts of the movie were stylized or if the game looked different in the real world, but it just looks weird as is.

Moving on, the rest of the film is well designed, specifically when it begins to show the world of the video game as seen by the players. There are some eye-catching visuals and special effects at points, as well as a few times where it appears off putting. But it’s consistently good.

The rest of the technical aspects are good enough for the movie, even if they weren’t mind blowing. The cinematography is good, especially when the camera focuses on Guy while crazy events happen around him. The editing was unnoticeable, with a few moments that worked well for a joke. Finally, the sound and music were fine, with some excellent usage of songs thematically with the rest being forgettable.

“Free Guy” is sure to be a crowd pleaser. It’s an enjoyable film filled with fun references, a good premise and excellent lead performances. Although some aspects like how the game looks could be better, it’s still a fun movie.

This is the kind of movie that Ryan Reynolds is perfectly cast for. It’s quite possible it wouldn’t work as well without him. That being said, Jodie Comer holds her own surprising well. If both of them were to return, they could boost a sequel up pretty well.

For now, “Free Guy” is just above average.