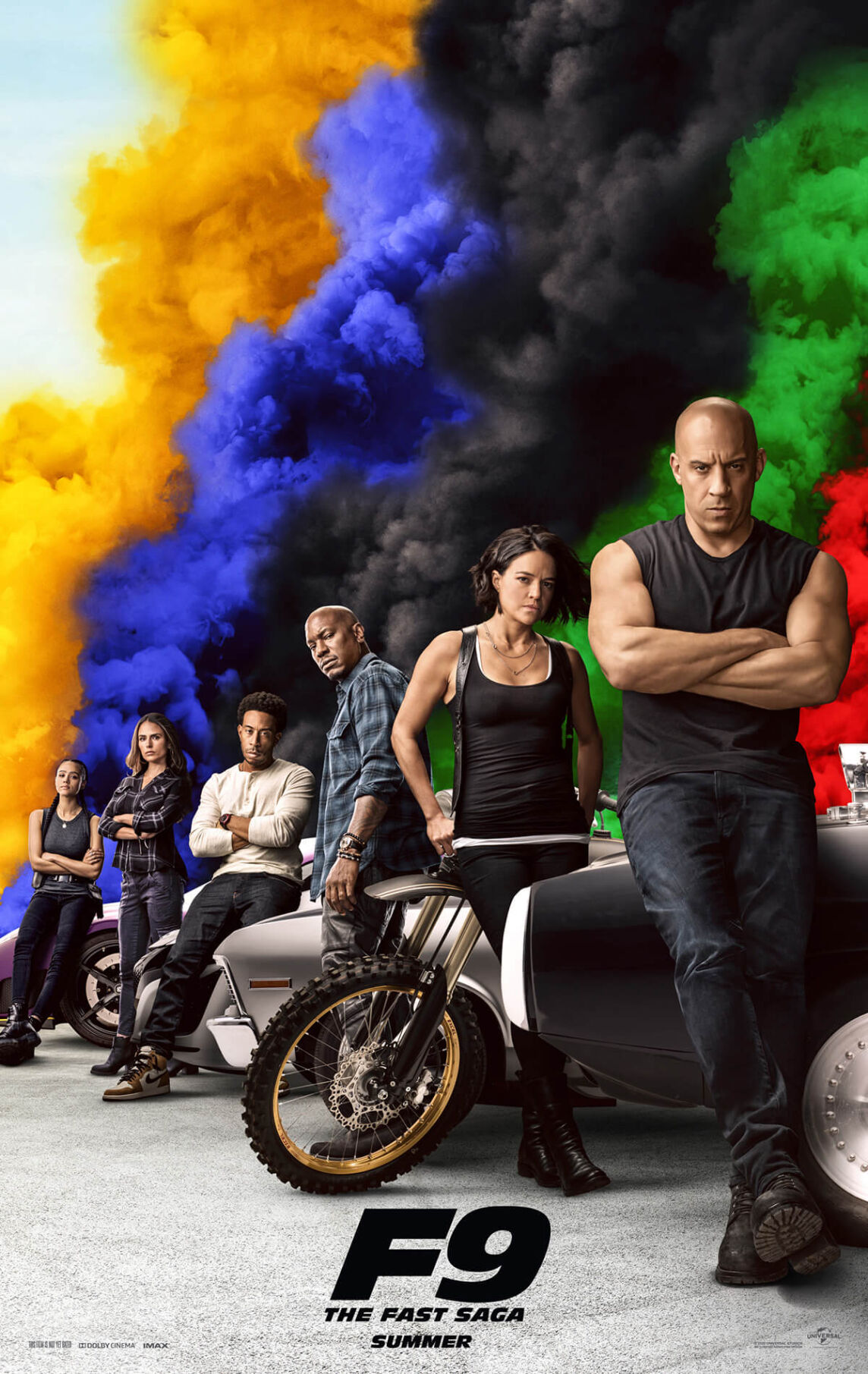 The “Fast and Furious” franchise is the definition of big, loud and dumb popcorn movies. “F9” is now the biggest, loudest and dumbest one so far.

“F9: The Fast Saga” is the ninth mainline film in the “Fast and Furious” series, which currently boasts 10 films in total. “F9” sees Justin Lin returning to the director’s chair, with his last film in the franchise being “Fast and Furious 6.” It was written by Lin and Daniel Casey.

The film follows Dominic Toretto and his family crew as they must stop Jakob, Dom’s brother, from obtaining a secret piece of government technology that could destroy the world. With help from familiar faces from the series’ past, they must put an end to the bad guy’s plot the only way they know how: driving.

“F9” fits with the rest of the franchise in its depiction of action, driving and stupid plot developments. But this film consistently shows that the “Fast and Furious” series has mastered the art of creating enjoyably dumb action films.

The film stars the typical crew of the franchise, with Vin Diesel as the lead. The rest of his crew includes Michelle Rodriguez, Tyrese Gibson and Chris “Ludacris” Bridges. New to this film is John Cena as Jakob, one of the main antagonists. Along with them are other characters from previous films that won’t be spoiled here (even if the trailers insist on showing them). All I’ll say is that I felt a great sense of joy seeing some characters come back on screen.

There is one thing about the acting that needs to be clarified before continuing. The acting is never good in these movies. However, everyone plays these characters so earnestly and with the right amount of charisma and passion that they make it work. They fully embody these characters, even if they will never be “great” performances.

The technical aspects of this film are handled well. The cinematography does its job, even if it can be a little shaky at times. Generally, the film has good shot composition with the action staying consistently in frame. An interesting aspect of the cinematography is during the flashback sequences to Jakob and Dom’s past. They were filmed with accurate film grain, imitating what it would look like if the film was shot during the flashbacks’ time frame.

Along with the cinematography, the editing is kinetic, matching the action and tempo of the film. It can be a little choppy at times, but it works well with minimal distractions. The sound design is also impeccable, fully embodying what it would sound like to be in the franchise’s world of cars. Finally, the score by Brian Tyler along with the soundtrack fit the movie well, even though it can be a little distracting.

But the main attraction to “F9” is the cars, action and set pieces. This film delivers on some of the craziest and most expansive action sequences in the entire franchise. They are equal parts ridiculous and well thought out, with several memorable set pieces and technology being utilized to their fullest. One thing is clear: they are incredibly entertaining.

That is the beauty of “F9” and “Fast and Furious” as a whole. They have crafted some of the most enjoyable, ridiculous and fun popcorn films in the past 20 years. No matter how stupid the plots are, how bad the dialogue is or how terrible the acting can be, they have perfected the formula for movies that audience members can turn their brains off and enjoy the ride.

These films are so great at what they do, you won’t even question the casting or story decisions that were made until you’re out of the theater. It is so naturally inter-woven into the movie that they make everything work.

“F9” is not only the most recent addition to the franchise, but a film that showcases everything right and wrong about the franchise. It remains as one of the best action franchises ever, and it will only get bigger until they outright stop making them.

It is a film that is both ironically and unironically good. It’s definitely better than most of the movies, but it doesn’t quite reach the heights of the franchise’s best films. Everything being said, “F9” is a fantastically fun experience that is best complimented in the biggest and loudest theater possible.

Overall, “F9” proves that nothing will ever replicate the sheer magnitude of this franchise. It is unabashedly itself, and that’s all it needs to be.