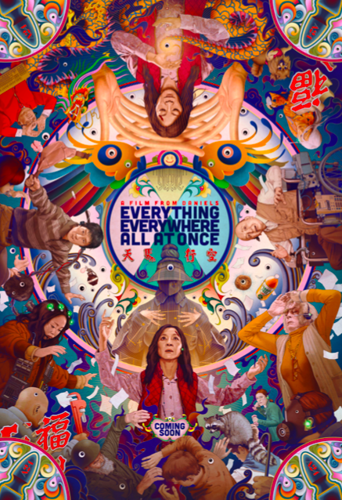 Words cannot begin to describe the audio and visual aura that emits from every moment of “Everything Everywhere All at Once,” but let’s try anyway.

This is the sophomore film from filmmaking duo Daniel Kwan and Daniel Scheinert, otherwise both known as Daniels. Scheinert has made another film by himself, but this is the first film they’ve collectively written and directed since the 2016 film “Swiss Army Man.”

The film follows Evelyn Wang, a laundromat owner with a crumbling family dynamic. Just as everything falls apart, she gets thrust into a multiversal conflict while filing her taxes. She is informed by a different version of her husband, Waymond, that she must learn to use the skills of her other selves to fight against the powerful Jobu Tupaki to save the multiverse.

“Everything Everywhere All at Once” is unlike anything ever made. It weaves together universal themes of family and destiny while making intangible concepts graspable. It’s a film that utilizes every single aspect of filmmaking to create a film about everything.

The film stars Michelle Yeoh as Evelyn, Ke Huy Quon as Waymond, Stephanie Hsu as Evelyn’s daughter Joy, James Hong as Evelyn’s dad and Jamie Lee Curtis as IRS agent Deirdre. Everyone gives their all in these roles, not only grasping their specific selves but also being able to effortlessly switch to different versions of their characters from other universes and embody the skills that they have to offer.

This is especially true for Yeoh and the actors who play her family, as they do all of this while speaking English, Mandarin and Cantonese. They encompass every aspect of their roles while instilling heart and soul into every facet of the film. Yeoh shows impeccable range within each version of herself, and it’s mesmerizing to watch her perform as she expresses herself through fighting, cooking or emotive complexity.

With her performance, the film is able to ground itself to convey its concepts, which are steeped in hefty science fiction. But the film expertly navigates how to inform Evelyn and the audience about these ideas while actively executing them. In terms of writing, it’s a stroke of genius, as it is able to turn these large, philosophical and convoluted science fiction ideas into a tangible and understandable form that the audience can follow along with.

Along with that, it balances tone in a way that will have audiences laughing at the absurdity of the situation one minute to tearing up in the next as the familial drama begins to take hold. It uses these concepts to tell a story about figuring out your path in the infinite multiverse while discovering what you can do to change the nature of those individual realities. One reality might seem perfect compared to the one you’re currently living in, but there are steps that can be taken to make it all work, even as those steps break off into their own separate universe.

That’s where the pure creativity of the film fills the viewer’s imagination with every possibility that this movie holds. From universes where verse-hopping is discovered to one where everyone has hotdogs for fingers, anything and everything is a possibility. The film is able to weave these various iterations together through Evelyn to help her in her quest, taking various skills from each universe like her singer universe or her chef universe.

This aspect of the film is brought to its fullest potential given the nature of filmmaking, time and budgetary constraints. There are snapshots of potential universes that are shown, which only makes me dream of a film where the Daniels were given an infinite amount of time and resources to see it all come to fruition. That being said, it’s unfathomable that this movie was made on a $25 million budget. They used every single cent of that within this film, and it’s all put onto the screen for audiences to appreciate and enjoy.

Even then, they don’t let the budget restrict their creativity, and it’s quite possible that if they had decided to include anything more, the film would collapse in on itself as the audience gets further sucked into the everything, everywhere, all at once bagel that is this film. However, I don’t think I would mind a film that goes on for infinity if it’s as beautiful as this one.

This film is pure craftsmanship. The Daniels used every single aspect of filmmaking at their disposal to create this film. Along with that, this is something that could have only been put to film. There is no other medium that I can think of that could have accomplished everything that this movie did, all while building upon influences from film canon, like Bruce Lee action films and Wong Kar-wai dramas. It’s not just the acting, the story or the structure of the screenplay that makes it this way, but the technical film aspects too.

The way that the camera moves and positions everything within the frame is precise and calculated. It is able to switch between aspect ratios, angles and film styles with grace as if these are ancient masters working the camera using techniques passed down for generations. Along with the camera, the lighting is deliberate, with brilliant usage of colors and light tricks to convey certain ideas and emotions, blending with the acting to say everything it needs to visually.

The production design is out of this world, with several costumes, sets and props that pull from various ideas and influences within the movie itself. For example, I love the Bluetooth devices that they use for verse-hopping, as it makes the film still feel grounded within some kind of reality and gives it that DIY feeling to parts of the movie.

The editing is absolutely mind-blowing, with the film at times cutting on action during a fight scene between several dimensions all at once. The fracturing effect that is used in tandem with the camera is a perfect way to encapsulate the split feelings and universes that occur throughout the film.

In time, this film may act as a masterclass on how to edit a billion different sequences, takes and ideas together into a singular film. Its ability to cut between different universes during a sequence and tie each and every individual scene together into a unified motif is jaw-dropping.

Finally, the sound design and the music is all perfect. Everything about it works, whether it’s using cartoon sound effects for a specific sequence, referencing a video game within its sound — I 100% believe that there is a Super Smash Bros. sound effect used — or a beautiful usage of “Clair de Lune” that occurs throughout the film. The sound design and editing match with every other part of the film, along with how every other part is intertwined into each other.

“Everything Everywhere All at Once” is one of a kind. I don’t think there has been or ever will be a movie that captures even a crumb of what this film has to offer. It blends together a universe’s amount of ideas, stories and characters into a wild, emotional film, while infinitely expounding upon that at the same time.

This film is special. We don’t quite get movies that utilize every aspect of filmmaking itself into one film, let alone something that feels like the cosmos aligned to bring two forces together to create something that exudes creativity from its pores.

This film alters everything we perceive film to be. It changes how we view the world and the universe. It makes us question how we view life and everything that it has to offer. It acts as the catalyst to unlock the infinite possibilities that can come about by what cereal you had this morning, what you said to the barista upon ordering your coffee or if you decided to take some kind of risk.

Whatever you do, please walk, run, sprint, swim, drive or fly to whatever the closest theater that is playing “Everything Everywhere All at Once” as soon as humanly possible. This is a film that doesn’t just demand to be seen, but it demands to be experienced by anyone, anywhere, at the same time.