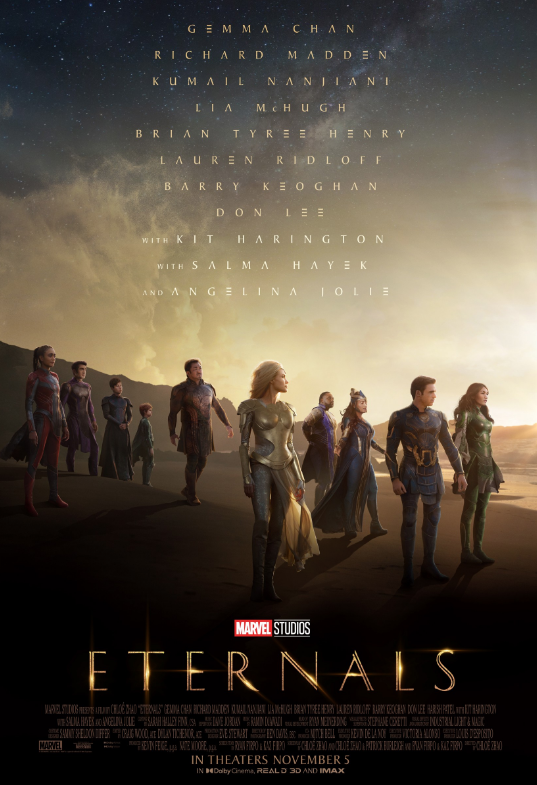 The Eternals don’t quite stick the landing in a valiant effort to establish a story that took a millennium to unfold.

Marvel Studios’ new film “Eternals” marks the 26th film in the cinematic universe. It is directed by Chloé Zhao, fresh off of two Academy Awards for “Nomadland.” She wrote the film along with Patrick Burleigh, Ryan Firpo and Kaz Firpo.

The story follows the Eternals, a group of 10 immortal alien superheroes. They were sent by the Celestial Arishem to protect earth in 5000 B.C. from the Deviants, a group of alien predators. After seven millennia, the Eternals, split up across the globe, must reunite to eradicate the last of the Deviants. However, something is awry as the truth of their mission begins to unfold.

“Eternals” is an interesting, if messy, superhero film. It tries to create an expansive and intricate story with a huge cast of characters developed over eons, but it falls just short of fully capturing everything that it wants to.

With nearly 10 main characters, the cast for this film is huge, though it does take a sidestep from some of them in order to develop a core cast to follow.

The main few characters include Gemma Chan as Sersi, Richard Madden as Ikaris, Lea McHugh as Sprite, Kumail Nanjiani as Kingo and Brian Tyree Henry as Phastos. These characters get the most screen time in comparison to some of the others. They’re also the most developed in a few different ways. They are given some clear motivation and their individual characteristics get more time to develop, especially in relation to one another.

Along with them, there’s Lauren Ridloff as Makkari, Barry Keoghan as Druig, Don Lee as Gilgamesh, Salma Hayek as Ajak and Angelina Jolie as Thena. These characters are also fairly defined, but they are really not given much to do.

Jolie’s character, Thena, is probably the least developed in the film, as she has a disease that prevents her from helping. She really doesn’t have much to do in the film outside of sitting around and having other characters take care of her. Everyone else is given the bare minimum to have them stand by themselves.

Everyone does a fine job given the character writing. They are able to portray camaraderie and their individual characteristics well, but there isn’t too much to hang on to for most of them. It does help that everyone is given defined powers, like Makkari’s super speed and Kingo’s finger guns. At the very least, you can tell them apart from one another.

The strongest characters end up being Phastos, Sersi and Ikaris. Phastos is portrayed as extremely intelligent and sensitive, doing what he needs to for his family to survive. The latter two characters work through their combined relational history and the specific motivations that they have for the story. They really ground the film further and keep it moving along, while also providing some good emotional stakes.

Everyone else, however, just doesn’t have enough time to fully develop in some ways, which is ironic considering that this is the second longest film in the MCU. That’s also one of the main problems with the film. It tries to tackle too much within its runtime, making it feel simultaneously rushed and too long.

The story literally takes place during the entirety of human civilization, and it tries to show how these characters have grown over that 7000-year period of time. Along with that, it’s trying to introduce 10 brand new characters into the fold.

Finally, the story is literally and figuratively huge, as it introduces and establishes context for the Celestials and larger Marvel Cinematic Universe (MCU) storylines. Despite that, this effort is applauded. Zhao and the rest of the team tried to make the biggest MCU film yet, with new characters and a story with implications for the rest of the franchise moving forward. It really is a valiant effort, and it nearly works.

The film takes its time to develop, moving at a slower pace to get across everything that it needs to. That part works fairly well, but it does begin to drag at different points. It doesn’t help that the action scenes aren’t that exciting.

At the very least, the action does one thing well, and that is showcasing everyone’s individual power and how they all work together. But the scenes lack weight, even with the characters whose power is all about packing a punch. It ends up feeling glossy, almost like a dance instead of fighting — in some cases, that can be a compliment, but not here.

The other problem with these scenes and some other sections of the movie is the CGI, specifically for the Deviants. I’m not a comic book guy, so I couldn’t tell you if the portrayal of the Deviants is good or bad. But what I can say is that they just look like boring CGI monsters with nothing really connecting them to the story other than they need to be stopped by the Eternals.

There is one interesting thing about them that is a spoiler, but it at least made the story a little more engaging. However, even that wasn’t enough to really pull this movie up out of the drudgery of the fights and the pacing.

On a positive note, the cinematography of this film is beautiful. It combines a lot of the landscape capturing of Zhao’s other work with a lot of natural lighting. There’s good usage of the camera at times, providing some of the more intimate moments in the film. Ultimately, it creates one of the better-looking superhero movies out there.

But back to the negatives, the editing can be a little choppy at times. It played better over time, but the opening act had a weird rhythm in the cutting between shots. Also, the score is not memorable. It was another case of completely forgetting that the film had a score until it cut out, as it left with a faint whisper of background noise.

“Eternals” is a weird grab bag of a film. It tries to do too much without doing anything very well, except for the cinematography. It has too many characters in too large of a story that it can’t cover everything, which ends up hurting the film more because of the potential that’s there.

The dilemma of this film is the length. It’s too short to do everything that it has to do in order to make everything work, yet it’s too long to keep the audience’s attention given the amount of story and character that is being thrown at the viewer.

At that point, do you make it shorter or longer? For me, I’d advocate for making it a two-parter, with the first part set to establish the characters and their stories first, with the second part designed around the present-day aspects of the story.

Now, I’m not a filmmaker in Hollywood. Maybe this was all that they could reasonably do given the time and rigid schedule of the MCU. But the prevalent thought in the back of my mind is that I’ve seen the movie that already did this and did it better. That film is Zack Snyder’s “Justice League.”

That is an unfair comparison, especially given the context surrounding that film and its release. But it was able to interweave a huge story with several new characters within four hours, and that’s an accomplishment. “Eternals” might have been better if they had tried to do that, but who’s to say that would have actually worked.

As it is, the appreciation for “Eternals” comes down to the fact that they tried. It’s clear that Zhao and everyone was given a nigh impossible task of introducing these characters to the MCU and they mostly succeed in doing what they were set out to do. It’s just a shame that the movie is messy as a result.

Author’s note: On a bad day, like one when the writer sees the film late at night with a terrible migraine and an awful projector at the theater, this is a 2.5 of 5 or lower film. However, this movie gets the benefit of the doubt in that those aspects weren’t the movie’s fault. Therefore …