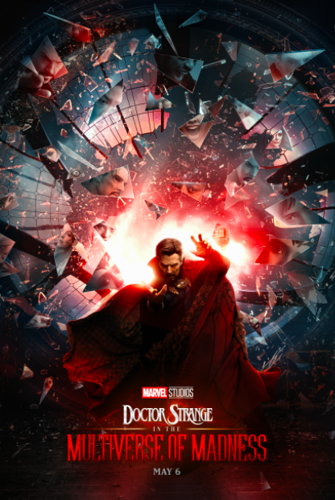 After a change in directors, “Doctor Strange in the Multiverse of Madness” travels to the big screen as the 28th film in the Marvel Cinematic Universe. It’s directed by Sam Raimi, known for the “Evil Dead” and the Tobey Maguire “Spider-Man” trilogies. The film was written by Michael Waldron.

The film follows Doctor Stephen Strange as he grapples with his life after Thanos. But when teenager America Chavez crashes into his universe, Doctor Strange must help her control her powers and find a way to stop her powers from getting in the wrong hands.

“Doctor Strange in the Multiverse of Madness” is a strong film in the MCU’s repertoire. It brings together the concept of the multiverse with some horror elements to create an entertaining film filled with Sam Raimi’s style.

The film has several actors reprising their roles, including Benedict Cumberbatch as Doctor Strange, Elizabeth Olsen as Wanda Maximoff / Scarlet Witch and Benedict Wong as Sorcerer Supreme Wong. They’re also joined by newcomer Xochitl Gomez as America Chavez, along with several others that won’t be spoiled.

Everyone performs greatly in this film. They bring forward some of the better performances that these characters have had so far, and they do so by matching the horror and goofy aspects of this film. Cumberbatch and Olsen both have a surprising amount of depth and emotion within their roles, while still making it fun and interesting. Gomez does a particularly good job standing next to everyone in this film, holding her own while carving out her place in this film universe.

A main positive that goes along with these performances is the character arcs. Just about every major character has a full, emotional, completed narrative arc within this film, which services the film exponentially. It gives the film character and heart where these films usually lack, which is kind of sad to consider.

This goes hand in hand with the villain, which is one of the better ones in the MCU. Without spoiling, the surprise is interesting and it’s well defined. They have been built up to this point as a potential villain, so to see them fully emerge as such felt natural. Along with that, they have clear motivation and reasoning, which helps to make them one of the more dynamic villains in the MCU.

Unfortunately, for as good as the character arcs in this film, it’s in service of a pretty basic plot that plays out step by step. In classic Sam Raimi fashion, the movie focuses on the good and evil forces within books. The characters are looking for a book to help them control Chavez’s power, while the bad guy uses a bad book to stop them.

It’s a pretty simple plot that barely stands up on its own. This wouldn’t be a problem if the film leaned heavily into the multiverse concept, spending time within numerous crazy alternate universes. But it doesn’t do that. In fact, the multiverse is sparsely used in this film, which is a little disappointing.

Neither of these elements are bad by any means, as they are still done competently, but it feels a little too simple for what the film was going for. Ultimately parts of the film seemed underutilized, as if they were holding back.

However, every other element in the movie elevates it further. Sam Raimi’s style and influence can be found in every inch of this film, from the camera movements to the editing. This is 100% Raimi’s film and it’s incredibly fun to watch because of that. His distinct style takes a decent movie and makes it great, and you can tell that he had fun making it. This isn’t just a Marvel movie, it’s a Sam Raimi movie.

This works in the action sequences as well. Several fight scenes are either inventive — there’s an excellent one using musical notes — or visceral. Raimi knows how to fully use the PG-13 rating, and he makes it seem as if there’s a more gruesome cut of this film somewhere. The level of violence on display is on a new level for Marvel, while benefiting this film well.

The horror elements are another great aspect of this movie that is built on Raimi’s style. It utilizes the darker atmosphere in tandem with the lighting to create a creepy feeling, along with the usage of extreme Dutch angles and expressive camera movements. It’s like watching an “Evil Dead” Marvel movie in the best way.

Another aspect that contributes to both his style and the movie as a whole is the editing. There are several precisely cut sequences within this film, which also helps in connecting the entire movie together. The overall pacing is quite brisk as well, making it a smooth two-hour film. Overall, it’s smartly edited.

Going back to the tone of this film, the score does a great job of conveying the setting and genre of this film. There are heavy brass instruments used that contrast with the frantic and haunting strings, creating this daunting, yet chilling score that fits with the film’s goals. There’s also a good usage of a horror sting throughout the movie.

Finally, the special effects range from noticeable to impressive. Depending on the sequence, the CGI and green screen appear out of place, but it’s not a deal-breaker for the film. Most of the time, it looks incredible, and there are some fantastic sequences that utilize CGI well. However, all of this is trumped by the practical effects, particularly towards the end. For what they’re going for, it’s perfect and goofy all at once.

“Doctor Strange in the Multiverse of Madness” presents a fairly basic plot within a slightly underused concept. But the characters, style and directing make this a unique film within the Marvel Cinematic Universe.

It’s such a joy to see a new Sam Raimi film. There were a few reservations I had about him doing a Marvel movie, especially with how the film industry has changed since his last go-around 20 years ago with “Spider-Man.” But he nails it, and it’s so clearly him behind the camera in every scene.

This feels like a rare instance where they let a director do everything they wanted to with a Marvel film. There are a few examples, like James Gunn and Chloe Zhao, but something about this feels different. There are still Marvel setups and future film aspects that the studio probably made him include, but it still seems like they let him have free reign over the end result.

These past couple of weeks have been wonderful for new films. If you’re looking for another multiverse film, the wonderful “Everything Everywhere All at Once” is currently playing too.

In the end, this is a great movie and a wonderful Sam Raimi film. Fans of the director will find a lot to love in this movie — especially a lot of his own references and cameos — and it’s sure to please Marvel fans. For me, it was just joyful seeing Raimi make a new movie.