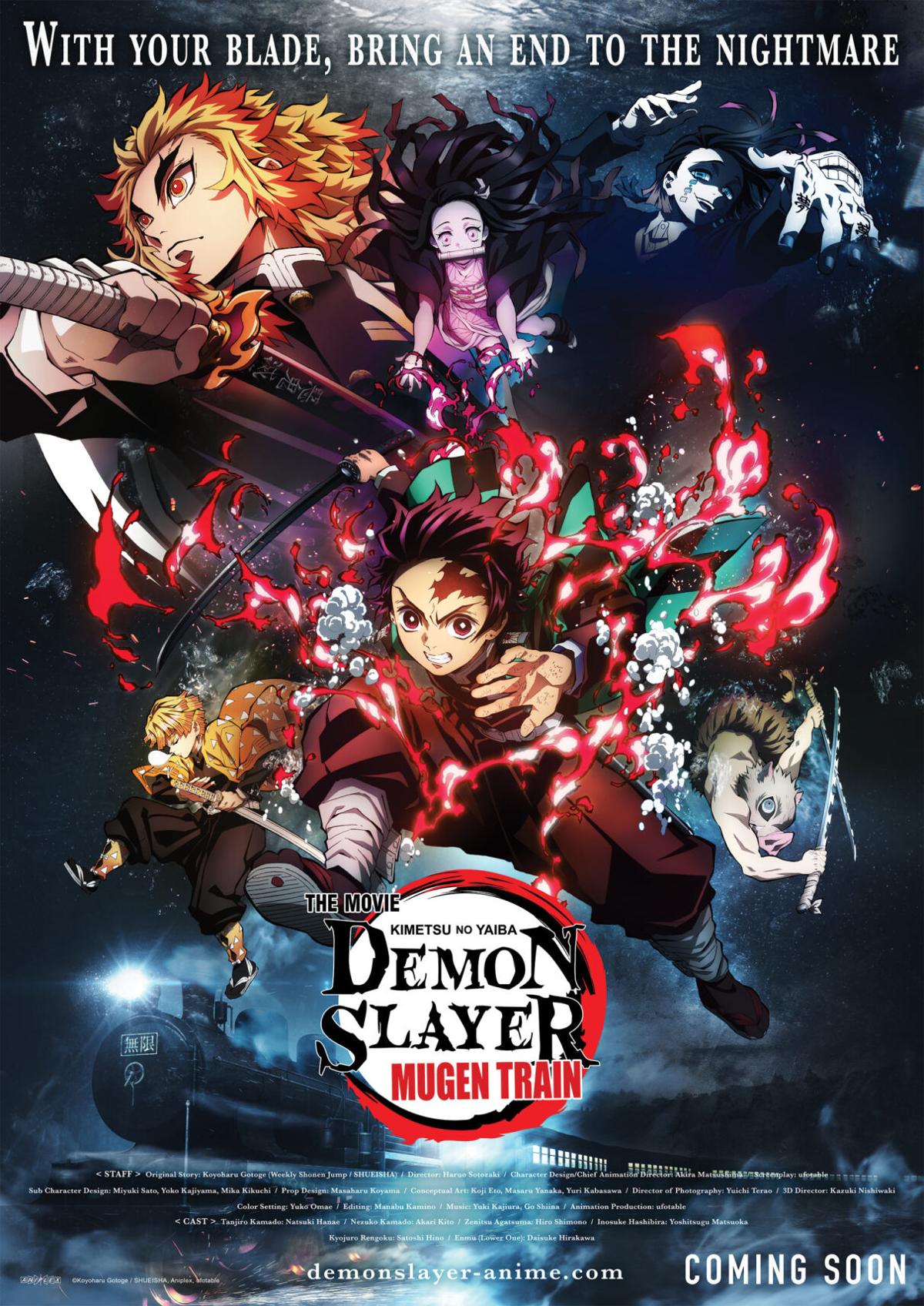 Demons, trains and slayers oh my!

All of these and more can be found in “Demon Slayer: Kimetsu no Yaiba the Movie: Mugen Train.” The movie is directed by Haruo Sotozaki and produced by animation studio Ufotable. The movie is a direct continuation of the anime “Demon Slayer,” picking up exactly where the first season ended.

The film follows young demon slayer Tanjiro Kamado as he boards the Mugen Train looking for a demon that has been taking the lives of several passengers. He is joined by his friends Inosuke and Zenitsu, high ranking demon slayer Rengoku and his younger sister turned demon Nezuko.

“Demon Slayer: Mugen Train” is a fun, energetic and well animated film that continues the story of the anime. Fans of the series will undoubtedly be satisfied. The movie can still be watched and understood by people who haven’t seen the show, but it’s best enjoyed after watching the first season.

Quick warning, the movie is extremely graphic. It’s very violent and features some disturbing imagery that might be upsetting for some viewers.

The film’s animation is top notch. Ufotable has consistently shown with both the show and this movie that they can produce some stellar animation. Everything looks incredible and several sequences are breathtaking to watch. There’s some 3D CGI that looks a little off, but it’s a minor distraction.

Along with the animation, the fighting and action scenes are fantastic. The action looks incredible with the already amazing animation. The fights also have some good emotional depth within them. This film represents some of the best action scenes from the series, potentially even in recent anime.

Without spoiling anything, the final fight scene is a true spectacle and something that anime fans will be talking about for a long time.

Moving on, the overall structure of the film is good. It does a good job at introducing elements and catching the audience up to speed. It flows well and it doesn’t feel like several episodes strung together. In other words, it feels like a movie.

However, the pacing is a little off. For the most part, it stays pretty consistent. The film has a good sense of when to move quickly and when to slow down. However, the last 30 minutes or so feels a little disconnected. In essence, the movie has a natural ending, but then decides to keep going a little longer.

Although the ending feels separate, the movie needs the section for several reasons, mostly for future storylines. It features some great moments that would be lost if the movie just ended. Unfortunately, it also introduces some elements without any prior set up, adding to the disconnection. But it is a great ending set piece.

Along with that, the writing is good. It captures all of the characters and their personalities well, but it feels a little one note at times. The writing is definitely based on the assumption that the audience has seen the show and already knows these characters well. Finally, the writing does that trope where characters say over expository dialogue, which can be a little annoying.

Finally, the villain is great. They are enjoyable to watch while also imposing a threat to the characters with some unique powers. There’s also a reveal that is delightful in its ridiculousness. It’s wonderful.

Overall, “Demon Slayer: Mugen Train” is a great continuation to the show. It features some incredible fight scenes, fantastic animation and a lot of fun plot developments.

The characters are engaging and enjoyable even if they feel like they’re on a little single minded at times. The pacing is also a little off track, but these issues don’t take away from the film.

Along with some specific fight scenes, fans of “Demon Slayer” will greatly enjoy this film. Despite some of its problems, the film is an enjoyable, entertaining and energetic experience.