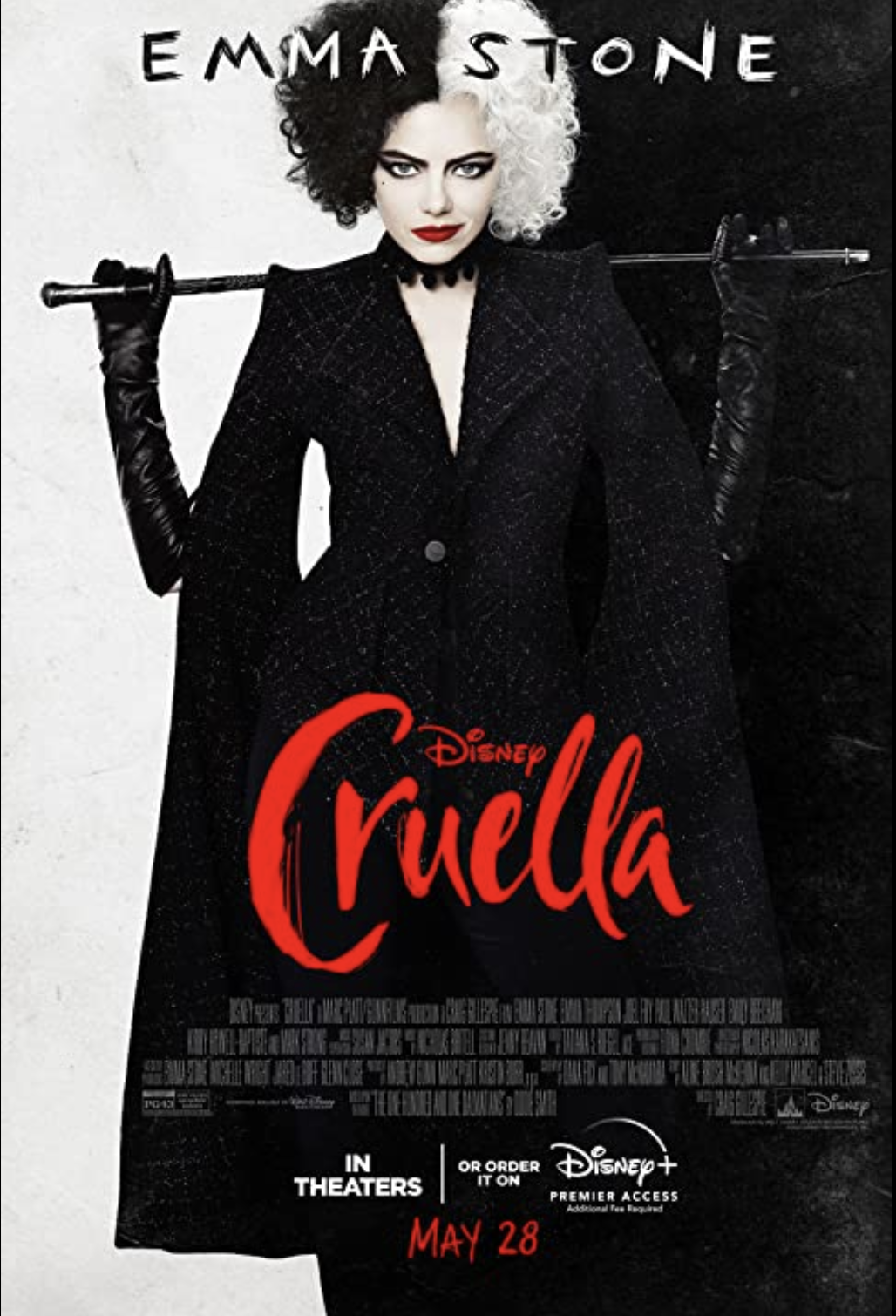 At least it’s not “The Lion King” remake.

“Cruella” is the most recent live-action Disney movie, this time retelling the story of the classic villain Cruella de Vil from “101 Dalmatians.” The film was written by Dana Fox and Tony McNamara and was directed by Craig Gillespie, who previously directed “I, Tonya.”

The film follows Estella, A.K.A. Cruella, as she makes a scene in the fashion world of 1970s London. She is joined by her goons Jasper and Horace as they compete against Baroness von Hellman, the leading fashion designer of the time.

“Cruella” is probably one of the better live-action Disney films of recent memory, but it has a hard time justifying its existence to the audience.

Emma Stone stars as Cruella and she gives a delightfully villainous performance. She does well in switching between her two halves of Cruella and Estella, with each having some slight differences. Stone seems to be having a devilish time in the role, as she really plays into the showy aspects of the character.

Opposite of her is Emma Thompson as the Baroness. She works great as Cruella’s rival, providing a similar air of confidence and narcissism. She also plays the character very pompously, which helps in making her a likable villain for you to root against.

Alongside Stone are Jasper and Horace played by Joel Fry and Paul Walter Hauser, respectively. They mostly act as the comic relief in the movie, but they didn’t feel annoying. They also each have different strengths, making them a fairly dynamic duo. They are both bumbling but competent members of Cruella’s crew.

The final performance worth noting is John McCrea as Artie, a new character for the film. He plays a flamboyant, David Bowie-inspired fashion designer that teams up with Cruella. He gives a fun performance that rounds out the rest of the cast of characters, and also works in fleshing out the fashion aspect of the movie, giving it a more robust presence.

Speaking of which, this film is fashion heavy, which is among the stronger aspects of the film. The film showcases some extravagant and elaborate dresses and costumes. There was a lot of attention brought to the costume design in this film and it shows, as it works in terms of flaunting characteristics and working within the narrative.

However, the narrative itself is one of the weaker parts of the film. For the most part, it does a good enough job at setting up motivations and progressing the plot. This film also does a pretty decent job at introducing newer information that recontextualizes the characters later on. However, the film contains two major issues in terms of story.

The first issue is a pointless narration by Emma Stone. It’s so pointless, it disappears from the film for a while, showing how unneeded it was. All it really does is repeat the same information that was previously shown or explaining parts of the story to the audience. It doesn’t work and ends up becoming more distracting than anything else.

The other story issue is the pacing. This film is overly long, with several sections in the beginning and end that drag for a while. Generally, its length helps flesh out characters, which it does well. But 20 minutes or so could’ve been cut without losing anything.

Besides the story, some of the other technical parts of the film are done in style. The cinematography is slick, with some flowing shots that convey the grand nature of the movie and setting. The color in the film is also quite good, especially in making certain colors pop out much more. It helps make the film feel more kinetic.

That kinetic energy is also reflected in the editing, specifically in the middle portion of the film. There are some stylish choices brought to the table, especially with the usage of newspaper headlines that appear during montages. Generally, it does well in setting a quick tempo that works with the film.

Finally, the film’s soundtrack fits with the punk aesthetic of the film. It is mostly comprised of 60s and 70s rock songs and they are used to great effect. However, it could have used a little more real punk rock in it, as it would have really sold the nature that the film is going for. But it still works regardless.

“Cruella” is overall a good movie. It’s well made with a great punk aspect that is showcased in the performances, soundtrack and excellent fashion.

Some of the story elements don’t fully come together, especially the narration in the film. It also never really provides a reason as to why this movie needed to happen. It’s good, but it’s unclear why Cruella’s story had to be told. It’s reminiscent of films like “Joker,” but it lacks the social commentary and compelling characteristics.

It’s hardly a bad time. In fact, it was a fairly enjoyable experience, especially when the film played into the villain and punk nature of the character. Upon finishing the movie, the feeling of necessity never appeared, further cementing that this movie didn’t need to happen.

If it’s any sentiment, it is the best live-action Disney film in a long time, so it has that going for it.