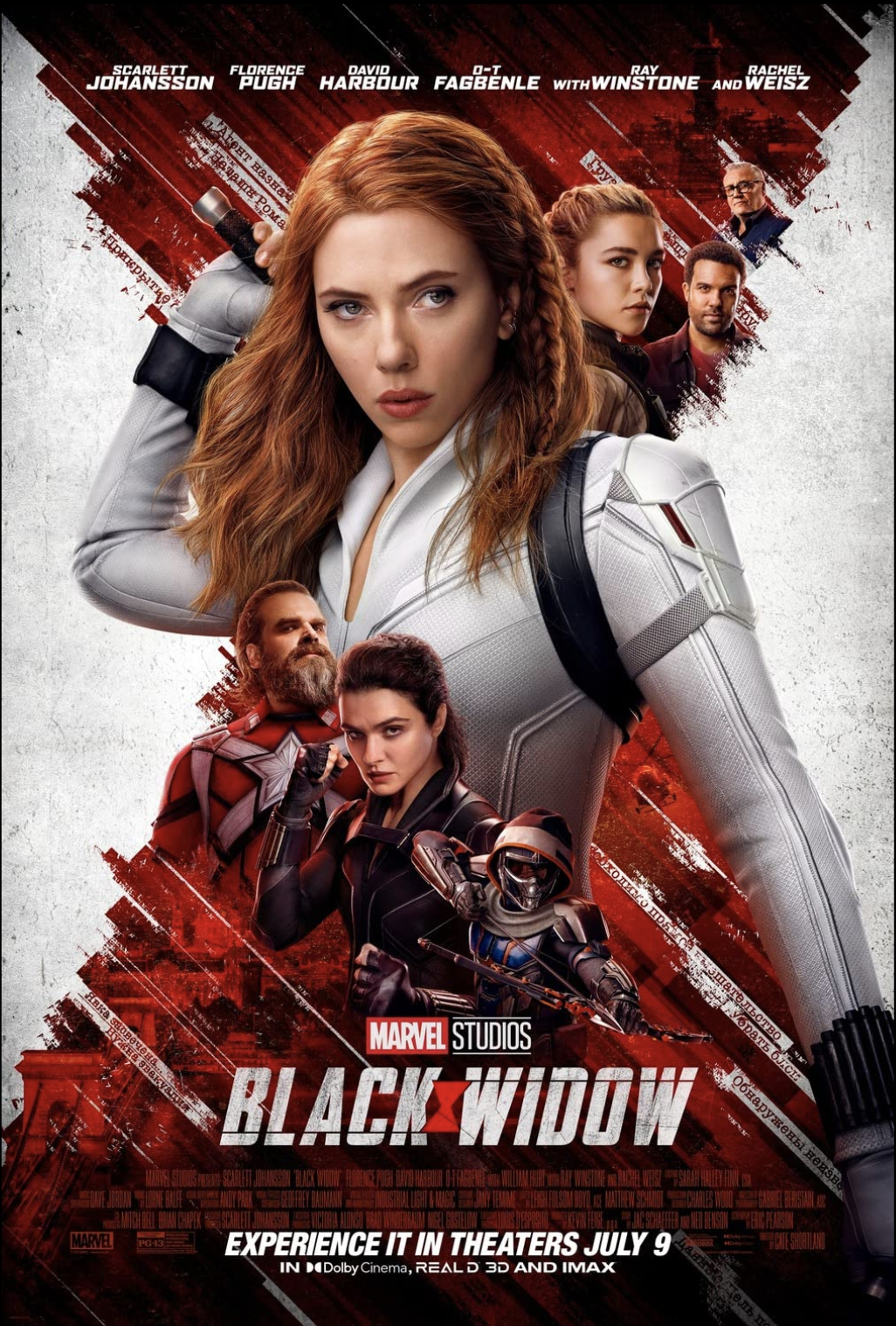 Although years behind, Marvel finally pulled through with Black Widow.

“Black Widow” is the latest film in the Marvel Cinematic Universe, following the release of “Spider-Man: Far From Home” after being delayed by over a year. It was directed by Cate Shortland, who also directed the films “Berlin Syndrome” and “Lore.” It was written by Eric Pearson, who co-wrote “Godzilla vs. Kong” and “Thor: Ragnarok.”

The film follows Natasha “Black Widow” Romanoff during the events of “Captain America: Civil War.” After being sent a package from her sister Yelena, Natasha sets out to take out the leader of the Black Widows, Dreykov, and his training base, the Red Room, with help from her “family.”

“Black Widow” is another Marvel movie -- flaws and all -- but with its own flair that sets it apart from the rest of the Universe. It’s an entertaining action spy film with great acting, fun characters and a smaller, serious storyline.

The film sees Scarlett Johansson return as Natasha Romanoff. She continues to perform well as Black Widow, consistently showing charm, stoicism and depth in the role. She proved to be capable of letting her character shine through the large casts of the “Avengers” movies and she is an incredible lead in this movie.

Along with her are Florence Pugh as her sister Yelena, David Harbour as her father Alexei, Rachel Weisz as her mother Melina and O-T Fagbenle as her friend Mason. Everyone performs well, even if their Russian accents can be a little distracting. Florence Pugh gives the best performance in the film, stealing most of the scenes she is in while giving the film a good emotional core. She also provides most of the comedic relief, and she delivers it in a way that’s not annoying.

Despite some typical Marvel quips and jokes, this film maintains a surprising level of seriousness throughout. The film delegates most of the humor to characters like Yelena and Alexei but gives them several serious moments that help balance it out.

Even when the humor becomes a little much, it fits better in this movie than it does most Marvel films. This is due to the style of the film, as it aims to replicate the feeling of a “James Bond” or “Mission: Impossible” movie; more so the latter films with their emphasis on action. It does an excellent job at accomplishing this with elaborate action sequences, sly technology and aware sense of humor.

It replicates spy films well by focusing on a smaller story. Although it takes place during one of the MCU’s bigger events, it’s mostly a revenge film about Black Widow taking out the organization that created her. It feels grand because of the character, but it works by not becoming too big.

However, due to the placement of the movie’s events, it not only feels like it’s part of something bigger, but it also should have been released a long time ago. This is one of the movie’s biggest flaws, and it isn’t even the movie’s fault. Because this movie was released post-“Avengers: Endgame,” it feels too little too late for Black Widow’s character. Along with that, this movie needed to come out around the same time as “Captain America: Civil War” to work thematically and chronologically. Because of those two reasons, the movie feels displaced by five years.

The other main flaw with the movie is some of the action. The action sequences are fun and engaging, with several excellent set pieces and well-choreographed fights. However, there were a few instances where characters were flung around even though they don’t have the superpowers or the strength to ignore it. For example, in one fight scene, Natasha is thrown into the side of a car before falling off a bridge, only to swim it off like nothing happened. It doesn’t occur all of the time, but it takes you out of the movie for a few seconds every time.

That being said, the rest of the movie’s technical aspects are well done, some of which were surprisingly better than most MCU movies. The cinematography captures the action and spy elements of the film well, along with having some brilliant usage of the color red. The editing is energetic as it matches the fast-paced nature of the film. For the first time since “Black Panther,” this movie has a great score, with some Russian-inspired themes and music to fit the setting.

The only distracting technical elements were some of the special effects, as the green screen was noticeable in a couple shots. For the most part, the effects are well done, at least in terms of keeping with the industry standard.

“Black Widow” is more of a victim of circumstance, feeling out of place due to the timeframe that it came out in and not the movie itself. This movie would’ve fit better into the Marvel Cinematic Universe if it had been released 5 years prior following the third “Captain America” movie.

However, “Black Widow” came out as one of the better Marvel films, with a spy film influence, interesting characters and fun action sequences. It’s worth the time put into it and Marvel fans will surely have a good experience with it.

Scarlett Johansson deserved better for this movie, as well as more screen time with Florence Pugh. But it works well for what it is.

United at the Table is an event put on by campus ministries. They provide food for 500 students on Ped Walkway.