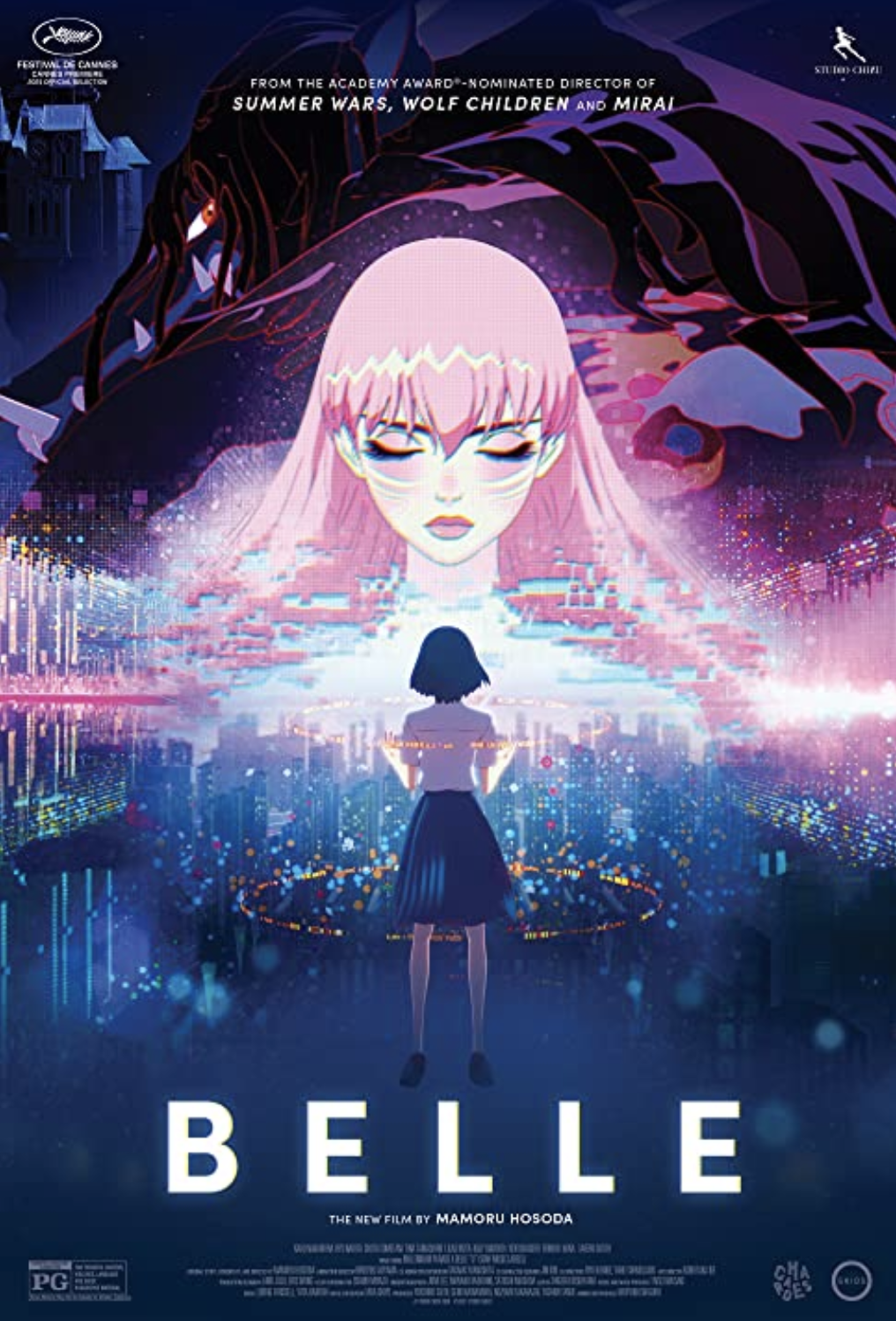 There’s nothing like taking a classic tale and giving it a modern spin, especially when you throw it into the future of technology.

“Belle” is the fourth Japanese anime film from Studio Chizu. It was written and directed by Mamoru Hosoda, known for “Mirai” and “Summer Wars.” “Belle” is a retelling of “Beauty and the Beast.”

The film follows Suzu, an ordinary high school girl grappled with grief. She struggles to connect with those around her and follow her passions. But after she signs up for U, a virtual reality simulator that creates a new version of yourself, Suzu becomes Belle, an online pop singer. Now she has to deal with fans while trying to figure out who the mysterious Dragon is before the cyber police do.

“Belle” is an often beautiful and heartwarming film. Its blend of animation styles along with incredible pop songs is an audio and visual delight. It helps that the story is captivating as well, along with giving a new spin on what it’s adapting.

This film was released with an English dubbed version along with a subtitled version; the latter is the version being reviewed.

The Japanese cast does an excellent job bringing these characters to screen, with most of them delivering specific emotions as part of their characters. The main star is Kaho Nakamura as Suzu/Belle. The Japanese pop singer performs incredibly well, lacing the characters with plainness and shyness as a high school girl, and elegance and glamour as the online persona. Her singing is also top tier in this film, as the handful of songs that she performs are stellar.

The rest of the actors, including Takeru Satoh, Kōji Yakuso, Lilas Ikuta, Ry­­­­­­ō Narita, Shōta Sometani and Tina Tamashiro, round out most of the rest of the cast. They, along with everyone else, do really well in giving the characters life and personality.

As for the story, it’s split into two realities that Suzu tries to navigate. The first is her normal life, including her connections with people and those that she has feelings for. The other is her U life, in which she spends the majority of the time trying to find the Dragon and figure out who they are while performing every now and then.

For a little bit, these two sections are a little disconnected, with only some of the actions having an effect within both realities. But by the third act, both main worlds and their storylines converge, giving both equal amounts of weight and purpose.

A major part of this film, too, is the “Beauty and the Beast” plotline. However, this film delivers its own take on that story, and it does so to great effect. Some of the key players are attached, but now Belle has her identity hidden from the beast as well. It’s also not a traditional romance story, which works better for what this film is trying to accomplish.

Instead of love, the film focuses more on themes of trust, pain, loss and honesty, and it uses both the “Beauty and the Beast'' story along with the nature of the internet to its advantage. The freedom of expression that anonymity online gives allows these characters to portray themselves however they want to. In Suzu’s case, she can be this glamorous pop star with an incredible singing voice; on the other hand, the Dragon uses it to release his aggression and relieve his pain.

These themes are quite beautiful, and they come fully into the spotlight within the third act. They’re not too subtle, but the emotional impact of them hits hard. It helps that the animation is gorgeous as well. It contrasts the plain and simple 2D animation of the real world with the vibrant and expressive 3D animation of the virtual reality world. It all looks fantastic, especially the 3D, which is some of the best 3D anime I’ve ever seen.

The animation uses a lot of different filming techniques, especially as the camera goes wild during the online sections of the movie. The different animation styles alongside its execution with the story and the music craft the film into something special.

“Belle” is a gorgeously animated film with a huge heart. It uses its blending of animation with its understanding of the internet to deliver a story about expression, trust and pain.

Studio Chizu and Mamoru Hosoda have done it again. They continue to show their ability to create beautiful films that tug at the heartstrings. This only being their fourth production (not counting some of their affiliated films) is incredible in and of itself. They’ve shown that they have the talent and craftsmanship to stand alongside the big leagues.

In another vein, this film is similar to Hosoda’s previous film “Summer Wars.” Both films use their virtual reality settings to deliver their stories. However, “Belle” takes that premise to a new level while incorporating a classic tale as well.

Either way, “Belle” is worth seeking out. If you have the opportunity to see it in a theater, take it. You won’t regret it. At the very least, the music is phenomenal.