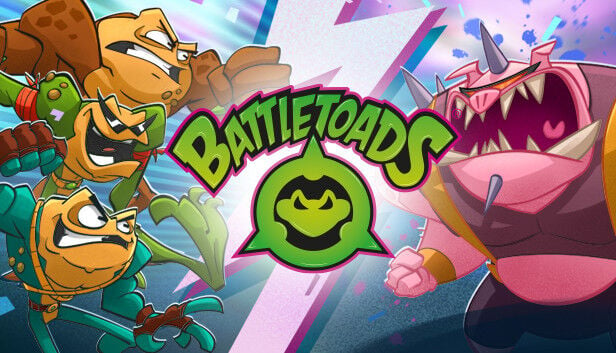 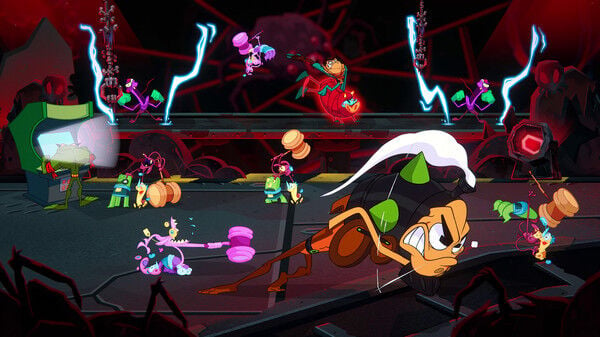 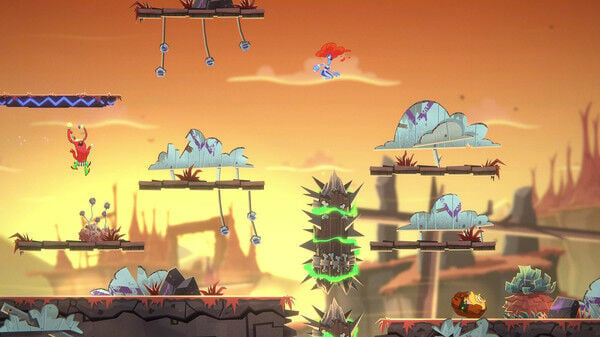 Let’s just get this straight: the fact that a new Battletoads game exists at all in 2020 is either a miracle or the work of some sort of black magic.

In case you aren’t aware, the Battletoads franchise was one that lived on in infamy. The original game was notorious for its absurd difficulty and clunky controls, not to mention that the titular Battletoads were seen as a poor man’s rip-off of the “Teenage Mutant Ninja Turtles”. However, this modern reboot seems not only aware of its notorious reputation, but absolutely revels in it.

Oddly enough, the strongest point towards Battletoads is its story. Here’s the premise: for the past 26 years, the Battletoads have been stuck in a simulation, completely unaware that the rest of the world has moved on from them. When faced with this reality, the Battletoads are forced to take on menial jobs. Dissatisfied with their lives, the Toads set out on an intergalactic road trip to reboot themselves and regain the public spotlight.

Battletoads is only concerned with two things: delivering fun gameplay and jokes at a blistering pace. The writing is quick-witted and loaded with toilet humor, fourth-wall breaks, and plenty of terrible toad-related puns. What really makes the story, though, are the Battletoads themselves.

Each one is, undoubtedly, a horrible, self-absorbed person. Zitz, the self-declared “leader” of the Battletoads, is a vain, insecure mess of an amphibian who cares more about his appearance of being a leader than actual being a good one. Rash is the moronic, impulsive one whose main concern is just being famous. And then there’s Pimple. Admittedly, he’s the more peaceful and thoughtful of the trio, but even he has his limits. The Battletoads are absolute garbage bins as people, yet that is exactly what makes it so fun to watch their antics.

So there’s the story, what about the gameplay? For about two-thirds of the game, Battletoads is a solid arcade beat-em up. Combos are simple but punchy, and various enemy types keeps the combat from getting too easy.

What really ties it all together are the Toads and how wonderfully animated they are. The Toads, for whatever reason, can morph themselves in mid-combat. This means the Toads can take the form of a train, jackhammer, boombox, and even a shark. Even better is how each Toads plays a little differently. Pimple is the big bruiser of the group with slow but powerful attacks. Zitz stands as his direct counterpart with fast attacks and better evasion. Finally, Rash stands as a balanced middle option. It is easily these brawling sections that shines brightest in terms of gameplay.

Although the combat is great, the last third of the game presents a major problem. The third act is composed primarily of mini-games with platforming sections and some “Galaga”-esque shooting sections. These parts, while initially serving as nice breather sections from the beat-em up action, quickly dominate the entirety of the third act.

These mini-games feel clumsy and nowhere near as fun as the main combat. Even more troubling is the length of the game. According to the end screen, it took me about 3 hours and 45 minutes to complete the game. That means that roughly an hour and a half of my gameplay experience were these awful mini-games. Much like a bad joke, these mini-games quickly overstayed their welcome.

Looking at Battletoads as a whole, it’s a difficult game to recommend. For a $20 game, you’re only looking at 4-5 hours of gameplay, and, with no unlockable modes or characters that are typically the norm for a game of this genre, there is little replay value to be had here. Not to mention, this game is begging to be played in co-op. While there is local co-op, the lack of online play feels like a major lost opportunity.

However, if you have Game Pass, I highly recommend giving this game a chance. The characters and story alone made this a blast to play, even with the shortcomings of the gameplay. While perhaps not every part of the game quite sticks the landing, it does leave me interested in more Battletoads.

Reviewed on Xbox One X.